Apologies if these questions seem naive to you more experience biohackers but I’m trying my best to learn as fast as I can about all this. I’m recently implanted and everything seems to be going really well so far.

My question is about data storage on the NTAG216 chip, I don’t have easy access to a android phone myself (although I did borrow a friends to do the recommended lock-down using the Dangerous Things Beta App).

I’m using the “TagWriter” software by NXP on a Windows 10 laptop for the time being (see screenshot below), I thought it would be relatively safe / good with it being made by the same company who made the chip.

Anyhow, I wrote a small text message to the chip which a friends phone was able to read back - great!

I just want to check that I am now safe to use the erase function in the software in order to wipe the slate clean and write new text date to it? Questions that arise from this are:

1. Would this typically erase data blocks like text, emails & URI’s but leave the chips UID in place?
2. Are the different data-types (links, emails, contacts etc) typically stored in their own define data-blocks?
2.a) So you can have multiple different data-types/blocks on the device at the same time?
2.b) If so is it possible to erase one of those blocks or would you typically clear all?

Normally I would experiment and learn through trial and error but obviously in this case I’m a little hesitant through fear of screwing up with something embedded inside of me!

Loving learning about it all though, thanks for your time and help. 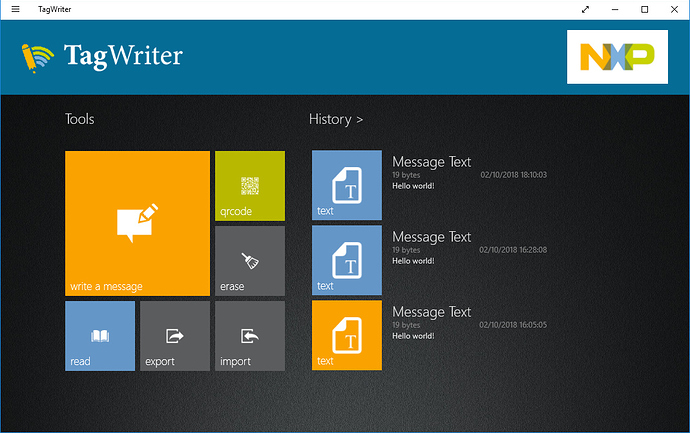 In my experience, “erase” usually just writes a blank / empty NDEF record to the first few bytes of the tag. It does not touch the UID or any of the other important stuff, it only affects the data area.

Sometimes “erase” (or “factory reset”) will actually blank the data to zeros, but that does not touch the UID or other important stuff either.

You can save multiple NDEF records to the tag, and you can mix them up. Eg. in one of my xNTs I have two URLs, a VCARD / contact info, and a text record.

Also in my experience, when making changes to a record on a tag, you generally overwrite everything at once, eg. on my xNT with 4 records, even if I just want to change one thing on the contact record, I have to rewrite all 4 records to get the tag the way I want. This is probably due to limitations in the software rather than the tag itself. Your software may do things differently.

And to erase ‘just one’ out of a bunch of records, you’d actually rewrite the tag with the records you want, omitting the one you don’t.

If you want to experiment without risking your xNT, you can get cheap tags on amazon or ebay or whatever. Look for NTAG216, you can usually get like a half dozen for $10 or whatever, in sticker format. That’s the exact same chip as the xNT and you can mess around with them and learn on them without worrying about the implant.

Thank you RealVioletWitch, that is very enlightening and gives me a few different avenues to pursue so thank you.

Of course, I already have some cheap generic tags I have been playing with but I don’t know why I didn’t think of getting other cheap NTAG216 to better mimic the true behavior.