One of the forum members was concerned that their implant would heat up while they were cooking on an induction stove. I put together this video introducing a bunch of materials and implants to an induction cooktop.

This is by no means a complete exploration of the possibilities, but I’m fairly confident that an unmodified induction cooktop will not heat up or destroy your implants.

We have also tested several x-series with induction stoves and got nothing… no thermal reaction, no nothing. It was so benign I didn’t even mention it on the testing page.

The primary motivation this time was the arrival of all these large antenna flex implants operating at LF. I didn’t think the fact that they were tuned for a similar frequency range as the induction cooker would matter, but more testing never hurts.

I highly doubt an x-series would heat up even with the ferrite core, because the whole point of the ferrite is to have high coercivity. Steel pans have low coercivity which is why they heat up.

Have been cooking on an induction cooktop for 2ish months with 2xL0 1xR0. Xleds and next.
I have not felt anything that resembles abnormality when cooking normally.
I have also used a massive cast iron skillet where my hands were that much closer to the induction field, nothing at all.
Experiments were also performed holding my hand over the induction coil chip side down. My cooktop (assume most would be the same) require the detection of a large magnetic mass to “turn on”. A pot only slightly miss aligned from the detection zone wont even “turn on”.
Hope this is some reassurance.

I tried it myself with an xFD: 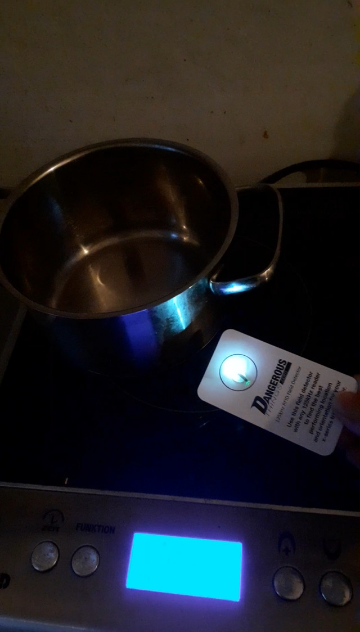 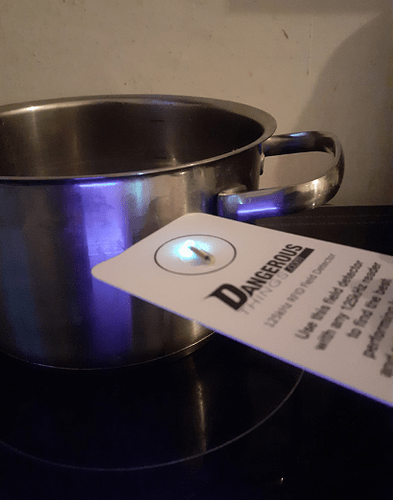 Interesting, i have the 125K and 13M xleds, had my hand on the skillet with a silicon baking tray to prevent burns… all in the name of science. Also tried every saucepan and cookware. Ill retry tonight with the field detector… (no percieved sensation or LEDs lighting up) My wife was looking at me with great concern.

It turns out the mechanism of action is different for the single burner plug-ins made in Asia (half-bridge resonant converter) and the full multi-burner stovetop units sold in Europe (quasi-resonant boost converter). I was testing the former, but it looks like yeka has the latter. Some also have a “Boost Mode” that does some whacky shit that may create HF harmonics that have enough power to fry an LED.

All the evidence I’ve seen so far indicates that the LF RFID implants are not at risk, but the LF LEDs might be. If you notice your LED implant light up while near an induction cooktop, move away. It takes more than a few seconds to burn one out, so it won’t happen by surprise. It’s tough to do testing in this area because there are such a myriad of different induction cooktop designs.

I’ve tried very hard to burn my xFD but I couldnt.

I had 2 LF xFDs now, so I thought I’d test it a bit more.
Surprisingly, they died.
Also, they do get warm after some time, a minute or two!

The first died pretty quickly, I didn’t expect that after my initial test.
The second took ~2 minutes + a small pause + another 30 seconds.
I only have footage of the second one. 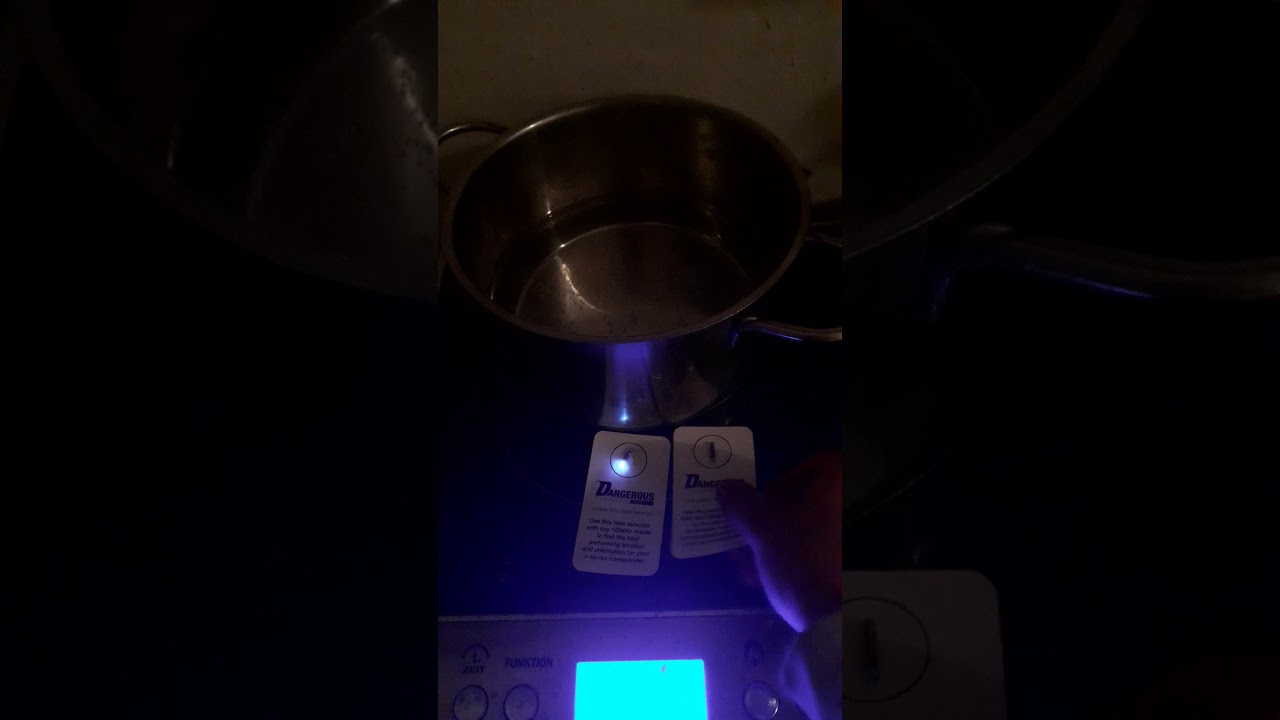 However, it’s highly unlikely that you’ll hold your hand on the cooktop like that for long enough.
All in all I’d say even with my cooktop, theres no real risk for LF x-Series.
But now I wonder about the flexEM…
Mariarangok November 3, 2020, 4:59pm #11

How am I only seeing this thread now? I asked about it cause I felt my flexMT being weird and too hot when cooking… I have properly burned through three test cards with three different induction stoves. The max level of the stove called P is where you can see the effect the most and the little LEDs in the cards take about 60 secs to die at most and that’s the one that makes my arm hurt, but I haven’t encountered any issues with the chip itself, it reads fine and it lights up fine so I guess it’s not too bad. Maybe Swedish stoves are super powerful, maybe a healthy dose of psychosomatic as well can be counted in the equation.

Sorry to dredge up an old thread, but it seemed the most appropriate place? Has anyone tested with a titan? My initial thoughts would be that it would pretty dangerous to have a finger magnet near an induction stove … but I haven’t done any testing to prove or disprove that. Any experiences here?

Chef here, with 2 magnets.
You don’t want to touch the induction top with Titan implant. Ever!
Hovering above is ok. I do that often.
You will feel a buzz, that’s all.

I had a video on my old phone when we threw magnets on an induction stove. Some noise and intense buzzing until it reaches the Curie point. Then the…now non-magnetic metal just heats up.

You can put a titan biomagnet or an ordinary loose magnet on certain induction cooktops for extended periods of time. I did for 5 minutes with no reduction in field strength or damage to the magnets. 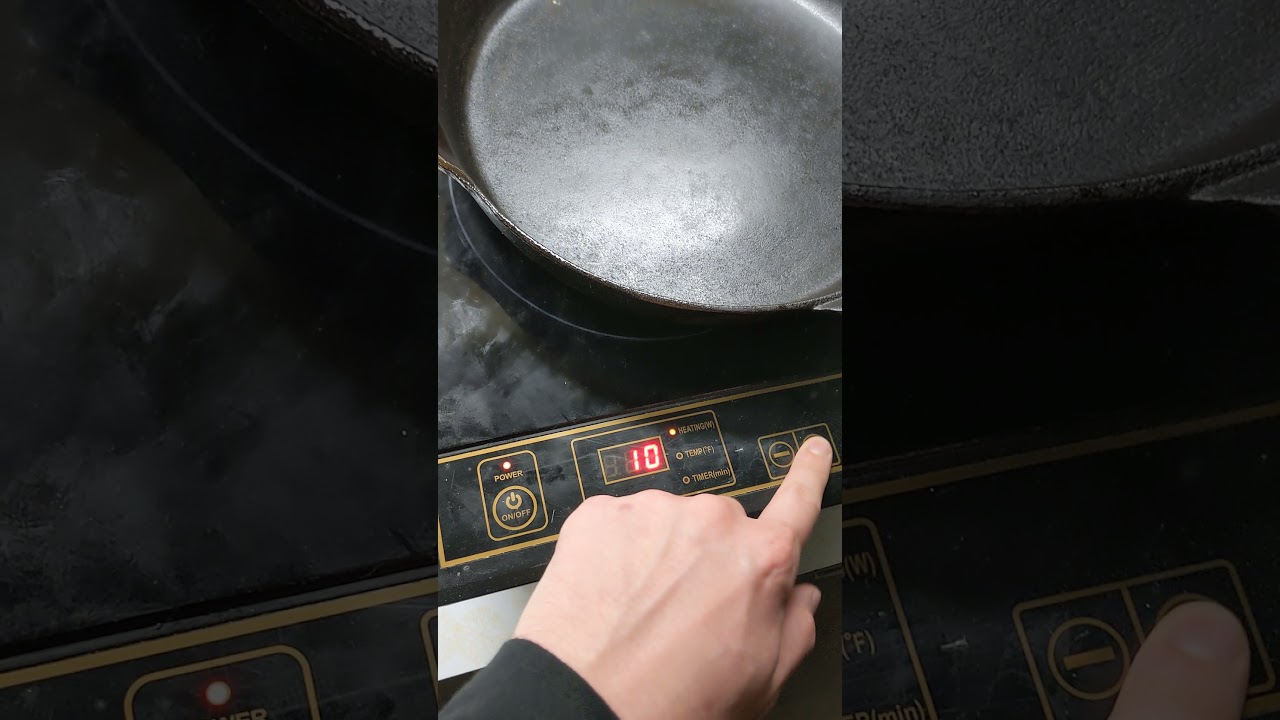 The problem here @Satur9 and @Atilla is the use of absolutes. As we know from Qi chargers and even induction stoves, they are all different enough that one may destroy an xLED or a magnet, while other models won’t.

In this case it’s probably best to err on the side of caution and advise people that an induction stove may have the potential to critically heat a magnet, so be careful approaching unknown stoves or cooktops.

I have very cautiously tested the magnet around my induction stove. The european one with the booster setting § that murders LEDs and makes the flexMT in my arm feel a bit burning. I have not had any heating or sensation issues but I haven’t gotten super close to it either, just enough to cook normally without any problems. I have currently three hand magnets, one of them a titan on my finger pad and they all behave the same way. I’ve performed the same test in multiple stoves with the same results all of them being ikea/electrolux stoves on european power specs with the booster § thingy on. I’ve been meaning to go to ikea and an appliance store to test with a wider range of stoves but for now, I’ve been able to cook in four different stoves with no magnet related issues, and heating sensation from my flexMT. I agree with Amal on the use of absolutes, and its a good idea to warn people of potential interactions with them.

You are right about that!
Pain is not a correct way to describe. For me is not a pleasant feeling.

The same had happened to me too however, I bought Gas stove after this, and now as I’ve fixed my Cooktop it’s working well for me.

I bought Gas stove after this

I still bet if you get it close enough to your implant, it will still “fry” it

I would also bet the plates they use to disarm anti theft tags might be pretty uncomfortable aswell and might even damage some implants. The longer anti theft tags with a barcode on top are disarmt by demagnetising a strip of metal in there. The big stickers with a coil are disarmed by inducing a high enough voltage in it to burn through the capacitor thats used in a resonant circuit with the coil. Induction plates are not the only thing that you might encounter in daily life that pose a threat to implants. It doesn’t have to but it could. I haven’t gotten my hands on a anti theft system disarming plate to test it on implants of all kind. Might be interesting to try out though.