Sentero - What does the community think?

Obviously this isn’t my idea but I just saw the ad for their Indiegogo on my Facebook. Just curious what you all think about it, if you think it would really work or if it may be worth the asking price of $160USD (plus SnH)

A Neurotech Sensory Enhancement company. We enhance humans not machines.

Just got an email about a new thing from CyborgNest… Sentero, which sounds like a less invasive (and more feature filled) version of the NorthSense, that you wear on your arm… Interesting… if sort of awkwardly bulky to wear in the same spot on your arm at all times… interesting though

In short, my opinion is, it’s only cyborg in the minds of the marketdroids who are selling it.

I toyed with the idea of getting one, but ultimately to me, it’s just another wearable. I feel like after a few weeks it would lose its shiny newness and I would take it off and forget to put it back on. Resulting in it having been a waste of a few hundred dollars. I like the concept of it alright… just don’t think I have an actual need for it.

That being said the ability to link with other users is a cool feature, so I might feel differently if I had family/friends/partner that were into it.

I think it’s just another novel device to try and warm the global population up to the idea of elective human augmentation.

I really like the idea and I’m stoked to get it.
If I get money like planned I’ll fund it, but I have to pay for a flex install so idk.
Ofc this thing is just 1 step in the direction of a compass implant, but it’s cool enough.

I’m curios if this works like advertised, like magnets, where I don’t feel it vibrate, but just ‘sense it’.

So, I am going to go a bit against the general consensus. It seems that a large part of the community doesn’t vibe with the idea since it’s a wearable. However, if it is able to do what it says it can, which is yet to be seen, I feel that it’s within the scope of “biohacking”. It’s using technology to alter the human experience or to add functionality to. It’s not all that different than the North Sense other than it’s marketable and usable by the average person. I have a feeling this is part of the reason that not a lot of grinders/biohackers resonate with it. However, in my mind, if biohacking is to really take off it has to be approachable for, and excuse me for using the term, normies e.g. my mom and sister.

@dnsprincess and I went ahead and backed it. I plan to do a year-long trial and document my results and outcomes. I think it will be interesting to see how much I miss the ability to sense north and nests after a year. If I have a significant feeling of loss of sense after the year I would call it a success. If not then there’s been essentially no sensory modification like you’d have with sensory magnets.

For sure I agree with you. What I meant is that if it’s not attached to me, I forget it. I’m that person. So I could see me taking it off to shower and just never putting it back on. Because this has happened with other tech/jewelry. I do like the concept and I look forward to you sharing some of your results! (if you plan to share of course).

Oh, for sure and I agree I am also likely to take it off and forget to put it back on. It’s definitely the inherent advantage an implant has over anything wearable. I do plan to share my results though and hopefully some other biohacking shenanigans too this year!

The thing that confuses me about it is where is it getting the compass data from? My continualy twisting / swinging / in use arm? I personally do not care what heading my arm has. The original NorthSense was mounted on your chest, so it was the direction you where facing, if the Sentero was say chest mounted or has some way of determining what way my body is facing not a box on my arm, then I would be more interested.
Still will be interesting to see what happens with it.

It might be using GPS, not just an IMU. If so, it could detect which direction you were traveling. Then you’re literally being tracked though

Saw this thing some time ago… not so sure about it.
Sounds like a nice idea, but I’m pretty much inside that “forget to put it on again”-category. Additionally, if something enhances my senses, it must be (at least semi-)permanent and literally a part of my body - just feels wrong for me to “put away” one of my senses. That’s just a personal opinion, of course, but it’s the reason why I’m not really interested until they make that stuff implantable

Q&A with Liviu regarding the Sentero

The original NorthSense was mounted on your chest, so it was the direction you where facing, if the Sentero was say chest mounted or has some way of determining what way my body is facing not a box on my arm, then I would be more interested.

I was curious of this same thing, luckily I did manage to find an answer prior to backing the campaign. 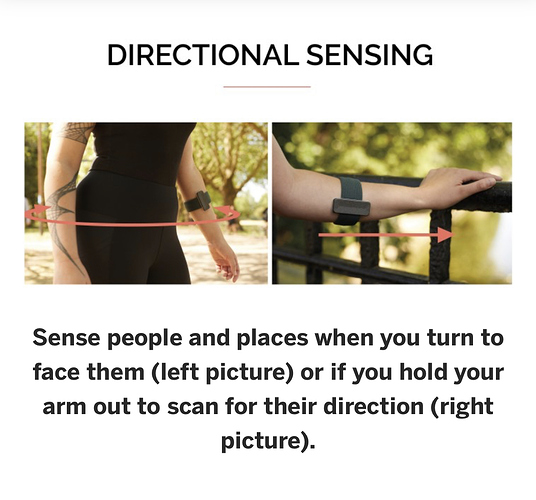 It seems the device will have a very good motion sensor, so it’ll know when your arm is at rest or when you’re aiming in a certain direction. I won’t know how good it is until I have it and start using it, but based on what’s described here, that seems much more sufficient than me having to point my arm in different directions, which is what I initially assumed.

… seems really gimmicky imo but each to there own

Did you plan any test in your trial, or you just go with the flow?
Also, do you include your results in your degree work? Or happy to publish results?
Also,also, would you involve others in your research?

If the answers are ‘yes’, maybe you can tell me some of your ideas.

Also-x3, if you have any tests, ideas, documentations you might as well contact Liviu, he would be more than happy to support you in it. He is generally interested in the topic, really he is! Me2, and it seems you as well.

sense of orientation. Maybe I could provide interesting data.

now, if we could compress it down a tad and cover it in bio-glass - id be game at getting this shoved in me. as for wearing it, in not even a fan of my wedding ring, so i had it tattooed. theres no way id be ok with wearing a forearm micro-pipboy type thing.

With this particular thing I’d be happy to have it as an exo-device.

but if I know my way I don’t want ‘Angela’ talking to me,
neither want to get used to her voice.

Or my watch ticks… great, but I take it off when I sleep.
Harbisson reported to have a ‘mute’ colour overhead when he sleeps.
There are senses I want when I need only.

now, if we could compress it down a tad and cover it in bio-glass - id be game at getting this shoved in me.

Totally agree. I’d love to have some kind of north sense, but I know that the surface-bar solution they had at the beginning wasn’t something to last for a long time, so I decided against it. The northstar might blow up in my chest, so that’s not an option either. But if someone could “convert” the sentero into a full-working nice little implant, I’d be very happy about it