We’ve had our xG3 in for 4 weeks now, and I’m a little concerned that it might be rejecting?

The skin over one end of the magnet is showing the sort of ‘cheese cutter’ effect we see with rejecting piercings - where one at a time a layer of skin will kinda peel off, and each time the piercing comes a layer closer to the surface.

Now, this is happening exactly where the needle went in, so it could be a healing issue. But this is our 12th injected implant and we have never had any of them take 4+ weeks to fully heal.

The magnet is in the blade edge of our hand and I’ve attached a pic, with arrows kinda showing where the two ends of the magnet are. The arrows aren’t touching the magnet cos that’d obscure the actual important bit. I.e. on the left side, the magnet is directly under the discoloured area of skin.

FWIW we haven’t done anything crazy with the magnet, we totally left it alone for like the first 2 weeks, and since then have only rarely lifted paperclips or coins, but mostly we’ve just ignored it.

Finally, the area is not inflamed or swollen or showing any signs of infection. There are occasional sensations of very mild pain / discomfort from the area where we’re worried about.

Oh and the magnet is in our left hand - we are right hand dominant but do use the left quite a lot too. Not quite ambidextrous but like, say 40% left / 60% right. So it does get used a fair bit despite being the nondominant hand. Dunno if that makes a difference. (Like, we mouse left-handed so that part of the hand spends a lot of time against the desk when we’re working.)

Again, this is our 12th implant and the first one we’ve seen this kind of reaction with, which is why we’re a bit concerned. 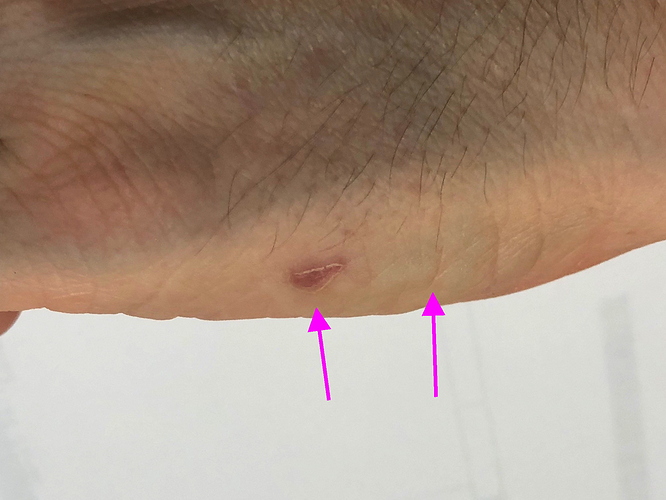 Hey! So my personal, not medical advice, opinion only, response here is that the injection site looks fine. The flaking can happen if the needle is injected bevel up, and the skin that collects inside the needle is then folded and pulled under along with the needle. Usually when the needle is removed, this skin is unfolded and pulled out like a flap that helps close the incision site. Sometimes it doesn’t unfold and stays under the skin. This prolongs healing and can cause this kind of flaking.

I am a little concerned about the coloring on the area of your hand above the injection site; 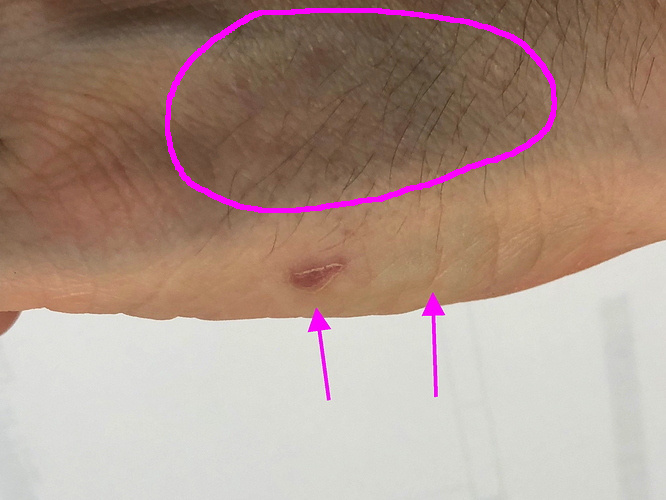 Is this just shadows or a trick of the light, or is it actually bruised? Is this bruising from another procedure or is it unrelated to the xG3 installation?

That makes sense about the skin folding under during the injection, we never really thought of it before. And its the first time this has happened, so it was a little concerning.

Sorry bout the ‘phantom bruise’, that’s totally a light/shadow thing. I didn’t even notice it when I was drawing the arrows lol.

How did it end up healing?

Hey, so its pretty much like amal said? Some of the skin got trapped inside or whatever. Its the first time this happened and we figure its cos the skin right there is a bit thicker, than anywhere else we’ve done an install.

Like in spots where the skin is thin its always flattened out when the needle comes out but the thicker skin probably wasnt flexible enough to pop back out or whatever?

Anyways so its still taking longer to heal, like it’s not 100% done yet, cos its like slowly pushing out little bits of this dead skin that was trapped inside. Kinda wierd, and a little uncomfortable now and then, but the actual magnet seems to be in there good.

Like the magnet itself is definitely not rejecting, its just that dead skin that makes it look that way.