Hey nothing urgent but could someone explain exactly what anything does here and how I can use it? All I get is I/O errors if I send any commands to my chip. I have the xNT 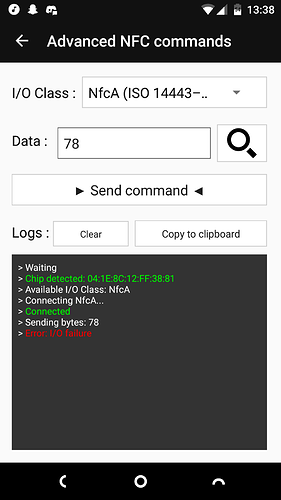 Not sure… the app isn’t showing the actual command APDUs being sent… unless “78” is the attempted command… which is not a legit command for the xNT. What app is this?

Oh ahha it’s NFC Tools Pro… got it… well, 78 is not a legit command, so that’s why you are getting an error. Be careful man… sending rando or poorly formatted commands can result in bad things happening to your chip. Have you protected it with Dangerous NFC yet?

Yep that was the first thing I did, I installed my chip 6ish weeks ago and it’s gone without a hitch, and the 78 was one of the commands it had but I assume I have to add on to it somehow. I’m adding a screenshot, 78 seems to be the command for reading the ID 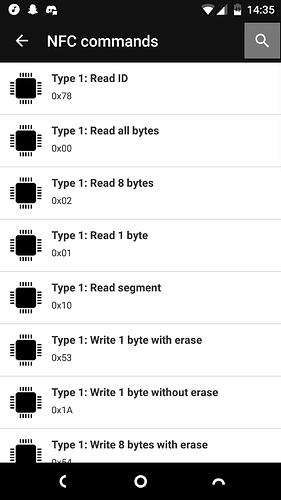 Here lemme grab you a link

NFC Tools is an app which allows you to read, write and program tasks on your NFC tags and other RFID compatible chips. NFC Tools Pro Edition includes additional features such as profiles management and many others. Save your tags or tasks profiles to reuse them later. Export and import easily. NFC Tools Pro Edition allows you to import your records or tasks directly from an existing NFC tag. You can edit your tag very quickly. Also you can run directly your tasks profile without NFC tags An...

I eventually plan to get my own scanner from the site and begin setting my car up with the Xem access controller or something similar
amal September 28, 2017, 6:57pm #6

78 may be an APDU designed to talk to the reader chip in your phone… the NTAG216 chip itself does not have a “get ID” command… the reader performs a ICC selection and the ID is reported at the time of selection. You can also just read data from memory to get at the ID…

In fact, none of these commands look familiar to me… they may be APDUs specific to Android OS or to reader chips inside phones… but they are not what’s used by the NTAG216.

Oh… hmm… well I’m not sure on this but it may be that those APDUs are what’s needed to talk to an Ultralight tag… which NFC Tools typically mis-identifies an NTAG2xx chip as an “Ultralight” chip… but even so, I doubt Ultralight supports “get ID” or “read 1 byte” commands… in fact, “write 1 byte with erase” … that’s definitely not supported by NTAG or Ultralight chips… so who knows.

You’re right on the money with that one, I checked the details on it (I use another app for reading sectors) and it identified it as an ultralight chip. So yeah I’ll just avoid touching those advanced controls. Thanks for the help man, and thanks for the implant.

Glad to help where I can