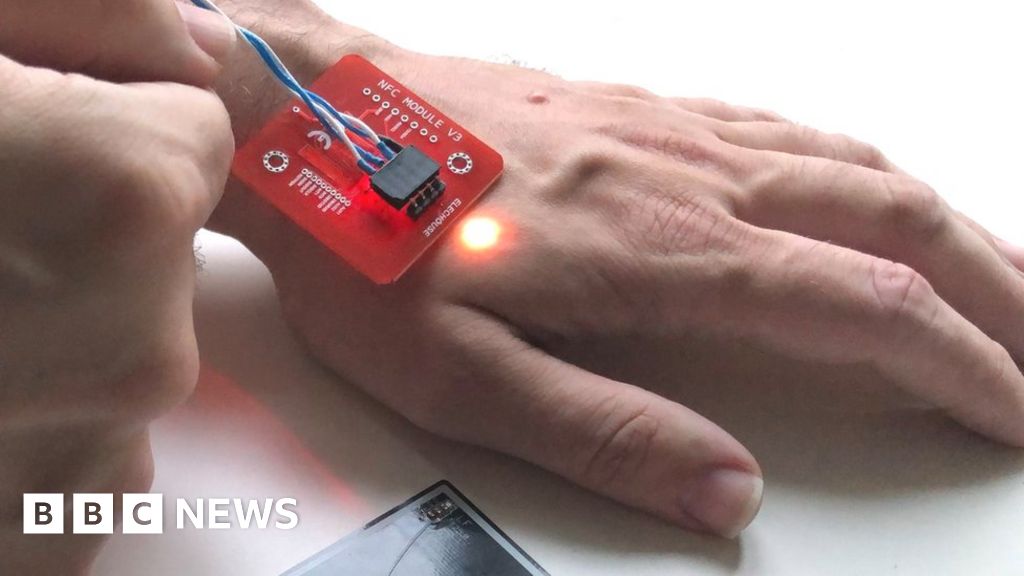 The microchip implants that let you pay with your hand

You can now get a payment chip injected beneath your skin, turning you into a human bank card.

The article is all over the place.

A small LED light under his skin then immediately glows, and the payment goes through.

He is able to pay using his hand because back in 2019 he had a contactless payment microchip, little bigger than a grain of rice, injected under his skin.

This just mixes up flexes and glassies

Walletmor’s chip, which weights less than a gram, is comprised of a tiny microchip and an antenna encased in a biopolymer - a naturally sourced material, similar to plastic.

It is accurate but confusing given the previous statements.

Back in the Netherlands, Mr Pauman’s payment chip has a built-in LED light that is kinetically-powered by the moment of his body.

At this point I am thinking the author didn’t want to devote too much time to the article and decided they had enough words and a mostly coherent story.

At least we can say it has a mostly positive spin to it which is nice.

Back in the Netherlands, Mr Pauman’s payment chip has a built-in LED light that is kinetically-powered by the moment of his body.

This one got me. I got to that point and was just… wuuut?!

Clearly he got a flex chip with a built in piezo crystal which generates electricity when he flexes it and it lights up.

Or the author had no clue what he was talking about and just wrote some crap.

I’ve submitted a complaint. Hopefully they fix their inaccuracies.

I remember watching the BBC Scotland News once…

“10,000 people marched through Glasgow today, oh, I’m sorry we’re not covering that one.”

That was about an anti-poll tax demonstration back in 1989.

Or the author had no clue what he was talking about and just wrote some crap.

1989 predates me and almost my parents

Is it my fault that you are a young whippersnapper?

I assumed that the journalist made the mistakes not that you had misled him.

Edit:
Might be coincidence but I was talking to a bbc journalist about the walletmor implant specifically.

Add 30 years and you would be right. I know that the age spread on here is pretty wide, and it isn’t relevant, it’s only when someone makes cultural references that you can really guess at their age. If it wasn’t for the grey in my beard you might not guess my real age.

you look like a multiverse amal from a world where everyone is pirate-adjacent. 10/10

No wonder you don’t have any implants, with a mustache like that you’d collapse into a coolness singularity

Everyone is talking about the mustache, but that hair is fantastic.

I’ve grown my hair out a few times (including now), never looked that good.

Would have 0 idea you were in your fifties. Younger than my dad, but older than my mom.