Botched install of an xEM - Migration deeper into the hand

Hey guys, I’m new here and I have a bit of a problem. I had a friend who is semi-familiar with doing stuff like magnet implants and other body modifications, and we had a bit of trouble with watching videos and figuring out where to insert the syringe. I’m right hand dominant and I had installed my xNT previously in my left hand successfully just as a challenge. When we started he insisted that the injection site was farther down than I had done mine. I don’t like arguing about stuff and I wanted to get this done and over with and he just marked up my hand where he thought it was and put it in. Later on after having on the included bandage for a day, I noticed that the implant had moved right in the corner where the joints meet up. It feels like its under a muscle and I can’t feel anything except the tip poking out when I squeeze my hand. Any ideas on who I should go to for this? I don’t live by any of the listed people on the map and I just want to be able to have it redone correctly. I have an Urgent care nearby and I know the staff and doctors there, so I was wondering if yall think that would be a good idea? 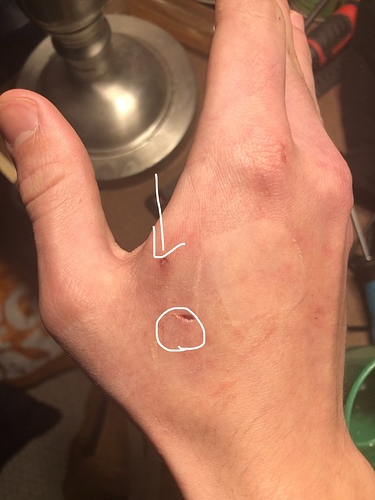 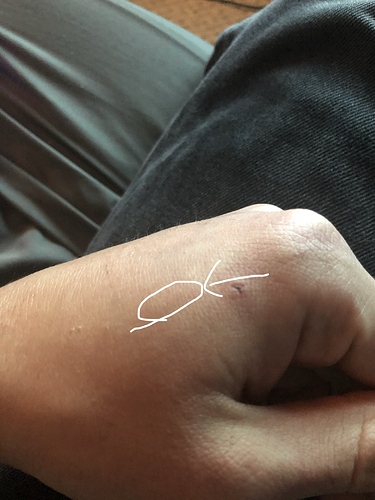 image1575×2100 574 KB
This is the one I had done not even a couple days ago. I wasn’t comfortable doing my right hand since I’m not ambidextrous, so yknow, makes sense

I would say being able to feel it at all during regular flexion/extension/abduction is probably cause for concern. It’s been about 12 hours since I installed my xNT and xEM myself, and I can’t feel them at all. Also, that mark on your first image looks pretty far down, that’s basically where my trapezoid is on my left hand. I’d (not a doctor) say it’s probably okay as long as you don’t feel any pain, but the second you do I’d get it checked out.

EDIT: Just to emphasize, I’m new here - @amal would probably be able to give much better advice considering how many installations he’s done. You could always ask a GP - personally I’d go to one that I don’t know well so they don’t tell me off for injecting things in my hands…

Yeah at first I felt it when I clenched my hand. And when I said I felt the tip of it, I meant with my other hand. Its a bit deeper than it should be so I might have to get it checked out.
Thanks btw for the advice, this community is pretty chill it turns out.

“Deeper” to me means it’s gone down further than under the skin. What you describe rather looks to me like the chip migrating under the skin from a high point atop the thenar muscle to a lower point on the side of the muscle - which DT chips are liable to do, since they’re not coated.

My xEM has done exactly that: it’s moved from the injection site on top of the muscle half an inch backward, between the muscle and the junction of the index and thumb metacarpals. Now I almost can’t see or feel it anymore, even if I press on one end of it. But I most certainly can’t feel it in any circumstances.

Give it some time to let it settle - and for the meat in your hand to conform. If it still feels uncomfortable in a couple of weeks - barring any other abnormal event happening to your hand - then maybe go see a doc. But I wouldn’t worry too much.

Alright thank you, my family has been making me paranoid about it all day and we had a party today for my stepfather and it was pretty much all the doctors my mom knows telling me that i’m an idiot. haha so I appreciate the reassurance. btw is yours positioned vertically or horizontally and how is the read range on it from that depth?

However competent they may be, a surprising number of doctors are contemptuous, intolerant and disrespectful of other people’s life choices. They really should know better, since they’re usually educated, they get to meet a wide section of humanity in the course of their work, and they swore an oath requiring them to show sympathy and understanding. But… there ya go.

haha yep. honestly I just got these because they were cool and I have a use for them that would save my ass on more than one occasion. Like what I see yall doing around here with keys and locks and stuff just gets my hardware oriented side churning and I see a bunch of possibilities around the home with some simple configurations. Hell you could wire up your car to open the drivers side door and even start the vehicle with either the xNT or xEM, their respective compatible scanners and an arduino.