Calling on xG3 implantees. A question if you please

I never though I’d want a magnet but have been pondering it as of late.

Would like to ask where you have your xG3 implanted, or if you have multiple, and are you still happy with its location or would you move it somewhere else if you could.

I’ve been looking at possibly putting it in the blade of my hand but wanting to possibly save that location for the Apex flex when it eventually releases.

I don’t have one, but if I did I’d want to put it in my ear. Not sure if that’s been done, and I’m sure it’s not easy, but that spot would keep it from destroying any electronics in my hands and still provide utility. I’m definitely interested in what others have to say though.

I implanted my XG3 on the side of my left ring finger, its only been there for about three weeks now but so far i’m happy with it. I was told more than once “it’s not a sensing magnet” and so far that’s true but its more fun to play with in my fingertip I believe. I have seen one story of it being implanted in the tragus (the little flap of cartilage in front of the ear canal) but I can’t speak to it’s effectiveness. So far the only thing I’ve been able to sense with it are other magnets and the high voltage machinery in the plant I work in. Nothing in the 120 to 240 volt range. Let me know if I can help any more.

UPDATE: I tried sensing the cord on a small electric heater and I can definitely feel a tingle when the heater cycles on and off, SO HAPPY WITH THIS NOW!

You mean in the lobe? that’s an interesting place to put it. Hadn’t even though of that

Mind if I ask how it sits in your finger?

I look at my fingers and I just cant see it fitting in there, not comfortably anyway… 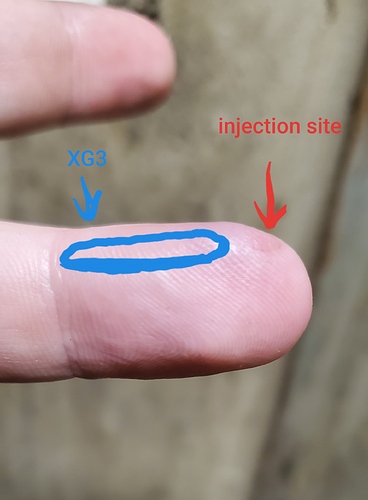 also, idk if you saw but I edited my earlier post, I tried again after seeing this thread and I can definitely feel amperage from 120v wires, I don’t believe you’ll ever get that in a place less sensitive than a fingertip. But don’t let me sway you, I’m still very new to this whole thing.

Interesting. Though I’ve tried to put the sensing side of it out of my mind as some have had mixed reactions to it.

I’d more be looking at usability as a magnet itself, basically a built in fidget device

I already mess with my NExT in my hand

UPDATE: I’ve been doing a good bit of testing and I would like to state that I can definitely feel 120v lines. It seems to be tied directly to the wattage of the circuit. I can feel the battery charger for my drill at 120v and 2.4A but I can’t feel the small fan in my bedroom at 120v 1.2A. Also at work I can’t seem to feel any 480v circuits with less than around 6A. This might not be the best magnet for sensing but with nothing to compare it to I’d have to say it works well enough.

I have had one in the blade of my left hand for about 2 months and it took a while to fully heal, but it is perfect now. To be honest I do not regret getting it at all, but it is really only a party trick. There really isn’t any practical use for it and its not sensing, but it can pick up a bottle cap at a party haha.

It seems to be tied directly to the wattage of the circuit. I can feel the battery charger for my drill at 120v and 2.4A but I can’t feel the small fan in my bedroom at 120v 1.2A. Also at work I can’t seem to feel any 480v circuits with less than around 6A.

In case you’re interested, the strength of the magnetic field generated by a live wire is completely dependent on the amount of current flowing through it

Was wondering the other day. Is there pole orientation when the magnet is in the injector? or is it random?

whichever way it comes out you should be able to reverse the polarity… using some science and possibly a lot of pain…
did you have a plan for it or just curiosity?

Mostly just curiosity to be honest

I’ve no problem with it just being a party trick. Like I mentioned in on of the other posts, I intend to treat it like a built in fidget device. I already mess with my NExT in my right hand

ferite has iron in it, can your xG3 “sense” your NExT?
I just tried with a small 3x3x3mm Neodymium and it easily “stuck” to mine

Is there pole orientation when the magnet is in the injector? or is it random?

It’s random. Functionally though, most use-cases for the xG3 (lifting small objects, detecting large current pulses) don’t distinguish between magnet poles. What did you have in mind?

My significant other and I got our first magnet implants together. We worked with my body mod artist to arrange the magnets with opposite polarities facing outward. For awhile, we could stick together. Eventually our magnets failed and she decided not to get another one until they’re sorted. It was an interesting experiment, though.

Unlike programming an x-series transponder implant, you could probably detect the orientation of an xG3 through the syringe. Start with a weaker ceramic or bar magnet, and hold it parallel to the injector near the plunger side. Don’t put a magnet near the syringe side, you don’t want it rushing out of the syringe and somehow popping the safety cap off. Also the metal will weaken the field from that side, so it would be harder to detect.