Cyborg bundle or NExT as first inplant(s)

Hello everyone! I am very new to this whole amazing underground world! I’ve been reading tons about what inplants can do, how to install them, and how to be safe about it. Now I’ve been shopping for what i want my first implant(s) to be. The cyborg deal is crazy, and hard to pass up. Having to get two put in is the largest problem, and I’ve heard that you can’t have two between the index and thumb metacarpals. Having them both on one hand would be ideal, and is probably going to be the deciding factor of the bundle or the NExT. Any advice on the subject is much appreciated!

I most circumstances the NExT is the best bet, I have one myself, it covers both LF and HF.

Then I saw the price on the store. $49 dollars, I mean that’s kinda hard to beat. If I lived in the US I would get it myself and I have 4 more implants coming this week.

If you intend to get more chips later down the line I would still value the NExT more as space in your hands are at a premium.

Would i be able to put both of those imants in the same area? I read some places 5mm, and others that you cant put two there. Then i see people’s x-rays that have 3 in that spot. Id probably get more, but not for a jother few years, as I’m spon to go to college. Im not too worried about that though, as many of the newer implants look like they’ll be flex.

Having to get two put in is the largest problem, and I’ve heard that you can’t have two between the index and thumb metacarpals.

That would depend on a case by case, I would say I have average sized hands and I would be happy to put two in that position.
2 caveats to that
Keep at least 5mm between them
Don’t put two of the same frequency in close proximity (except a “dumb” led)

I would also add, the NExT could still be the better option.
If you get a professional install you will likely pay for 2 installations for your xEM and xNT , and only one for the NExT, so the price difference might be negligible.
One hole and one placement, faster, easier and cheaper?

If you do a self install, it will definitely be more challenging to get “exact” placement of the 2 implants side by side.

Good point actually. I intend to self install my others like my NExT so professional install completely escaped me

Yes, thats helpful. As i was intending on doing an assisted install. The difficulties of an inexperienced person installing two is a good point. Looks like the NExT it is then!

Is the range of the NExT bad at all?

still doing research before my first implant, trying to decide between this, or the FlexNT. I really like how big the range is on the Flex, but the LF side of the NExT would be very helpful.

Not sure what to do.

if everything works out, I wouldn’t doubt that I’d end up getting both at some point lol

I have not installed mine yet (hopefully this weekend!) But i believe that the next has comparable range to other x series implants. It depends on the reader but from what ive senn, its usually good enough for most.

The flex series Usually gits a fair bit more range (again depending on the reader but i think ive seen a few centimeters) but its up to you on weather the range is worth the price and messier install.

I don’t have a FlexNT to compare performance it to my NExT, but I also have no complaints with my NExT .for range or performance

However, In saying all that

The biggest deciding factor will be, What do you plan on using the NT side of it with ie. reader? What will be your main purpose? Your personal use, sharing info via NDEF, access?
Ultimately that will guide your decision

Yes, you will get better range with the Flex, so if that is the most important, then go for that.

yup, that video is what made me want to get the Flex over the regular xNT. The biggest thing right now in my mind is NFC. I want to be able to put my contact information on the NFC so whenever I want to exchange my info, I can tap it. It’ll be a lot easier for the person who doesn’t understand the tech to see it tap easily instead of where I would have to try a few times, getting the right spot, before the phone picks up the NFC. And, I’m not really scared of the scalpel at all. The process of implantation doesn’t look too bad at all. plus 5 or 10 minutes isn’t too bad as long as I have some lidocane lol

I don’t really have a use yet for the LF side, honestly. I know that there is a lot to do with NFC as I’ve played with it, but I haven’t really played with LF at all. Really a noob when it comes to that.

Thinking about getting the Flex Mifare tag because that seems like it has a lot of use too.

I would love to be able to upload my Suica card to my hand whenever I go to visit Japan. Or, if I’m using the public transit in London, or even just doing something simple, taking the BART in the San Francisco Bay area. Not sure if that is LF or Mifare though. I doubt it’s all the same either way.

NFC so whenever I want to exchange my info, I can tap it. It’ll be a lot easier for the person who doesn’t understand the tech

I had a feeling that is what you were after, The Yeah, Sounds like the Flext NT may suit you better.

It is not your only NDEF option, The xSIID is also capable plus it has Blinky BUT xSeries

You also mention some public transport options.
So this is theoretical…BUT
Your other option could be get one of the FlexDF options that can store NDEF , Plus THEY ARE MORE LIKELY to be compatible with public transport, However This is Country, City, State, Transport Provider etc dependant…And even then, The FlexDF(s) don’t have changeable UIDs either, so, if they were compatible you would have to enroll them ( That is normally the hardest part, convincing somebody to let you )

As it stands, for your purposes, I would suggest in order:-
FlexDF2 ( Can possibly be backward compatible with DF1 )
FlexDF
FlexNT

Use TagInfo and check out your transport provider to find out what Chips they use and we can better help you decide.

If you get stuck or need more info, just ask

Damn dude, you’re amazingly helpful. I’d buy you a beer if I could.

This is exactly what I needed to read lol. I can’t possible state how much I appreciate this.

oh, quick question, what does NDEF stand for?

and, if possible what’s the differences between the FlexM1 and the FlexDF series of chips?

Thats what the forum is here for 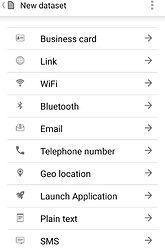 Keeping it simple ( I can, or somebody else can expand more if you want it )
M1 is a Mifare S50 chip, that has many names such as Chinese back door, magic mifare…
Pretty much, it has been “cracked” no longer secure, but it is also an older Tech that still has a great presence around the world, used in many hotels and office / apartment blocks, and purely because it is a huge and expensive undertaking to upgrade, and also the average Joe doesn’t know any better, companies choose not to.
M1 can also store NDEF, however and unfortunately it is not as easy as writing to it with your phone
The huge Benefit for OUR purposes, is the abundance of readers still around and the fact it is one of the Few HF chips with a Changeable UID ( Technically an NUID, but that’s the longer story)
The FlexM1gen1a and gen2, also have slight differences…Here’s the link…THAT I SHOULD HAVE JUST LINKED YOU TO INSTEAD OF RABBITING ON

The DF is the DesFire Chip, Much more secure and capable chip with more features if you have the skills to utilise them, It also has A lot more storage than the M1 ( which has more than the FlexNT) The downside is the UID is not changeable, so whatever you want to use it with ie. for access systems / locks, Transit systems etc you would need the access to enroll it rather than being able to clone a current working card, like you can with other Changable UID chips.

In short pros and cons for both, so start scanning your access/ transit cards etc. one option should come out on top…hopefully

I seriously cannot thank you enough.

I’m doing a lot of research currently, funnily enough, I do the best research at about 3am.

Also, thank you for showing me the xSIID. It looks great and might be exactly what I’m looking for, for a first time implant. What’s the strength like compared to the Flex?

sorry for asking so many questions! I’m doing as much research as I can, I hope i’m not bothering you with too many!

Do you mean the range?
Sorry, I don’t have one to compare, but there will be the other timezone peoples awake soon enough that have xSIIDs that can answer that for you.
I’m working the forum night shift

sorry for asking so many questions!

I hope i’m not bothering you with too many!

yeah, range would be a way better way to word it haha.

Thank you again, I do appreciate your help! I think it’s time for me to head to sleep now though. I hope you have a good night when the time comes for you!