@amal, @fraggersparks, @Pilgrimsmaster are you boys aware of DesFire ev3? Iceman and I had a discussion on slack the other day and I got this posted to me!!! 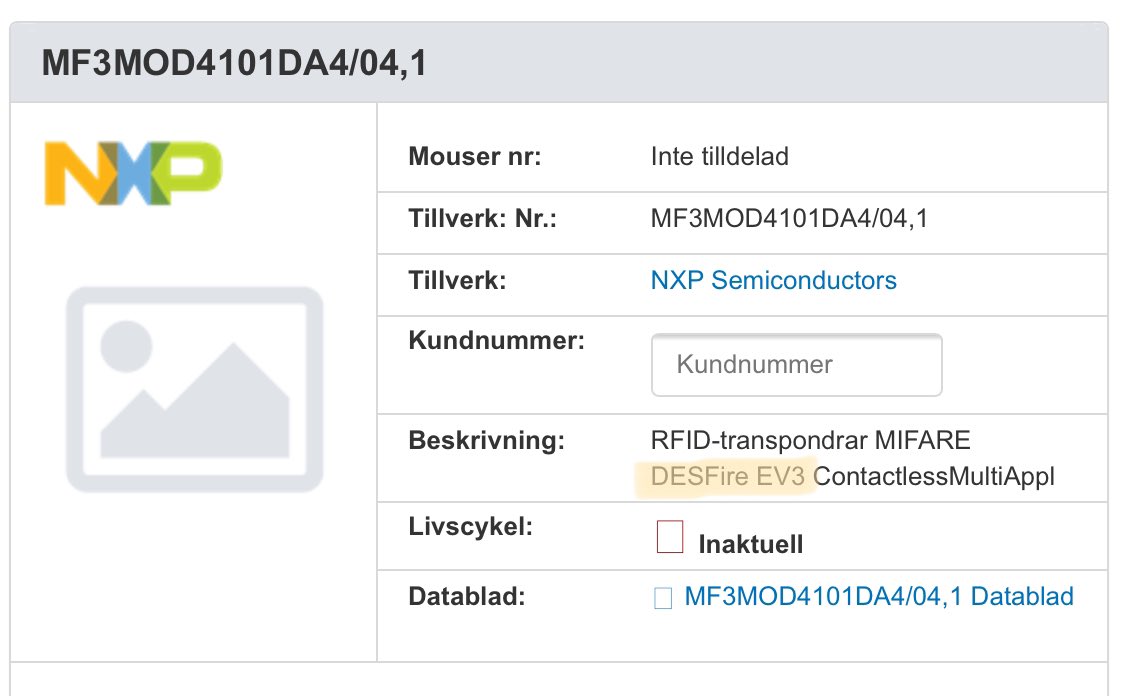 is upon us. Trying to find some more info but keep striking out. Any of you guys have any data sheets on this!

I wasn’t able to find anything other than that Mouser page you referenced. No press releases and no documents in the NXP DocStore, even with an NDA. Are you certain it’s not a typo? The datasheet linked on that page of for the EV1 from 2015

IDK that’s why I was wondering if anyone else knew anything. I’m gonna pm Iceman and ask him what’s up with it.

On the german Mouser site it says “abgekündigt” which means synonymously “angekündigt”/announced.

I assume the Swedish image in the OP means the same?

Also I assume that they got notice without an embargo (or they did not care), so since it is not released yet but just announced to one of the biggest online electronic-shop, that NXP does not yet have released information on their website until an official announcement has been made.

I don’t have any info on it at this time, but my hunch is that it’s yet another small evolution (EV = evolution) of the DESFire family… so… like the other DESFire chips when it says “multi-application” what it really means is AID file structures, not actual “apps” like the Apex can run.

The DESFire line has always been very interesting from the perspective of an individual wanting to hack together cool things to store and use their DESFire for… but when it comes to actual vendors putting applications on chip side by side, the DESFire loses steam because it requires a “master” key set to manage the apps on the chip. This means the Disney Magic Band for example, has a DFEV1 chip inside… and it has a couple AIDs for customer identification and secure ticketing… but if you wanted to deploy something else to the chip, you’d have to go through Disney because they hold the master keys and manage the AIDs on the chip… and they would never let you hold those keys because you could mess with their AID… re-key is… access the data… mod it… generally bad for them…

So the DESFire is a great chip line for single-vendor solutions, but it’s really not all that interesting (to me anyway) as an implant, other than the storage capacity… which is actually really great if used for NFC NDEF data… but, if I was going to develop any specific application for a chip implant, I would develop it as a Java Card application for the Apex.

Lets revive this thread a little. Sooo i got a few Desfire EV3 to toy around with at work and so far it’s pretty promissing. I just tested 2 transponders for range on my phone. One is a Desfire EV2 8k and one is the new Desfire EV3 8k. EV2 has a Range of 22mm, the EV3 has 26mm of Range. The reading speed is also a bit faster on the EV3. The website of NXP slso has it listed now.