Do you need a stitch after a giant needle install?

I know the big 4G needle is meant to enable “ordinary” piercers to install slim flexes. Funnily enough, my local piercer is fine with the size of the needle, but says he’s not doing stitches (probably not allowed) and he reckons the needle will require one, so he refuses to do a flex install with the needle. Well, he’s not that he refuses, but he’s extremely uncomfortable with the whole idea because he says if a stitch turns out to be needed after the install, I’ll be stuck with an open hole and he’ll be in a bit of a bind.

Do giant needle installs require a stitch? Even just sometimes?

I didn’t, couple steri strips and some liquid skin
My area body mods aren’t allowed so it’s something I went in knowing couldn’t happen

I’m not sure if mine is the most scar free recovery, a stitch could have possibly made it cleaner

But I think it healed fine

Some duct tape and a vice grip and you’ll be fine.

I’ve had three narrow flexes installed with the needle in different spots and none required a stitch. I put a butterfly closure over them and covered the whole thing in tegaderm and I was good

The only reason a stitch would be required is if one of two things happened. First, if the needle wasn’t inserted deep enough to create a pocket and then extra space for the flex to reside in during healing, and the flex is walked back toward the incision site by the zipper like function of healing… That could put pressure on the incision site and if it occurs soon enough after the installation it could cause problems with closing. The second reason would be if an incision was made in a part of the skin that is pulled or stretched constantly which would cause the skin to constantly reopen at the incision site and not heal well.

Okay thanks y’all. So an insertion point near a joint would probably be safer with one.
Now to convince the guy…

I suggested/convinced my installer/piercer to go away from the wrist rather than towards it for my P3 BIG NEEDLE install and it worked well as less skin movement at that end.

Healed fine without a stitch

My flexM1 is installed at the exact same spot as yours using the exact same entry point, but it was done with a thin skin lifter. Although it didn’t really bleed much, that required a stitch. I’m fairly sure it would have reopened, given how the skin had stretched around the suture after a week.

Just because the way skin is, incisions made with a scalpel tend to be straight lines while needle incisions are crescents. The crescent shape tends to fare better for some reason… probably the way the skin pulls apart when it stretches doesn’t want to open up in the same way that a straight line does.

I had a flex needle install 4 days ago and after having the steri strip on for those four days it’s nearly completely healed. Though I recommend butterfly closures over steristrips they work haha

This is about 7 months old, it’s not completely flat, and base on my other implants I expect the color to start to fade, the 2 knuckle implant scars are 2 months older than the flex, and the implant scar on the other side of the flex is nearly 10 months old, and it’s virtually invisible

Interestingly, there’s like an internal scar/line that’s either the implant itself… or where the needle scraped on it’s way in… never seen that before

I know the other obvious feature on your wrist has nothing to do with implants, but to anybody happening by this thread and casually perusing it, it is not a good advertisement for needle procedures 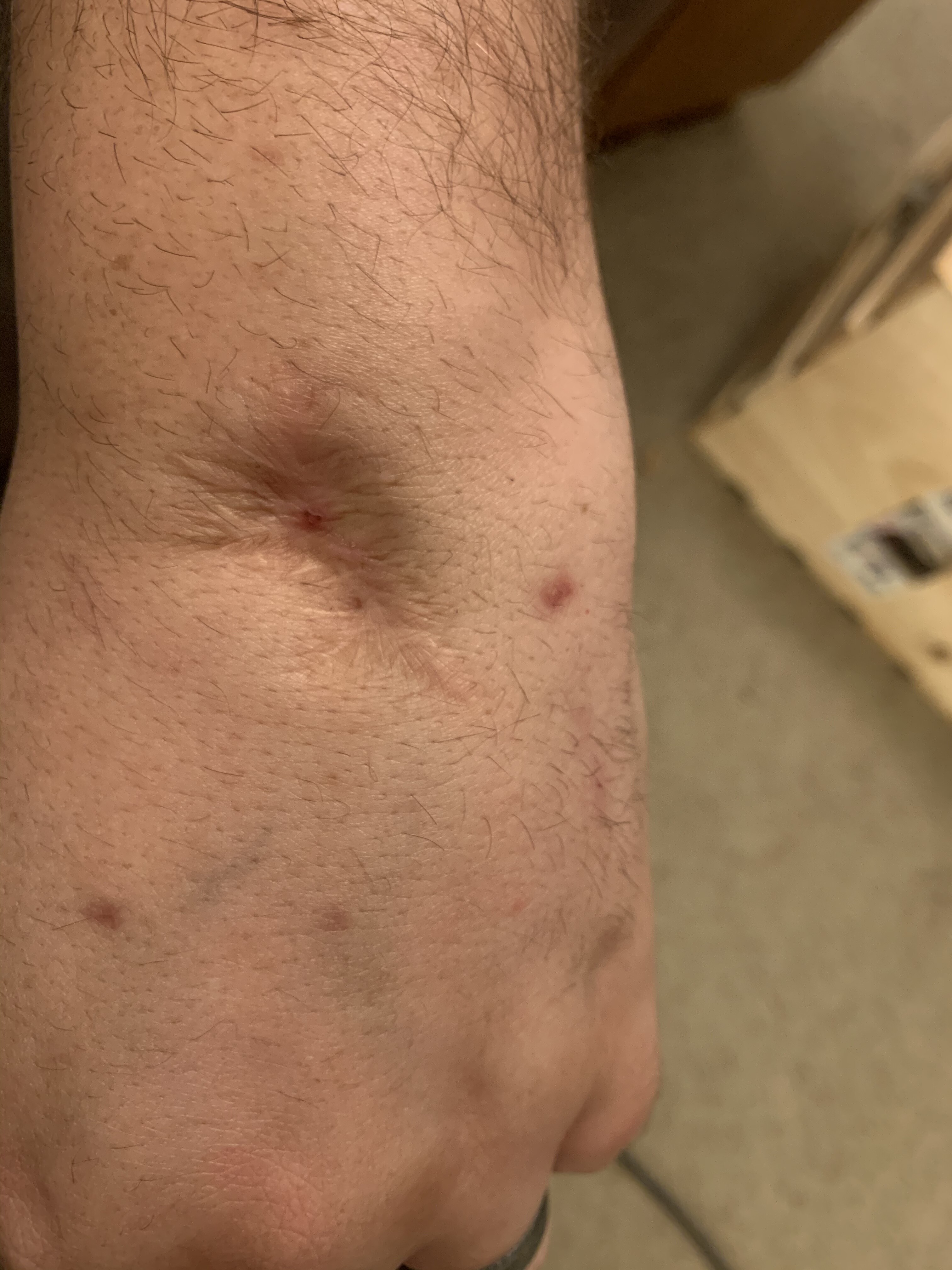 My significant other was saying I should say that was my flex needle scar, she’s can sometimes be as twisted as me

Just wait till I manage to get an X-ray, lol that makes the outside look like nothing hahaha

X-rays can be scary. My knee looks completely normal on the outside, aside from a 10" long old faded scar line. But the X-ray looks straight out of a Terminator movie.

@amal I have looked but I can’t find those implants in the shop. Any plans on bringing them back?

Just over a week, walletmor installed no stiches just some butterflies for the first couple days

Walletmor installed with needle after 3 weeks, no stitches not even butterflies, just normal bandages

im actually surprised nobody else mentioned it.

Well, Dermabond and other brands are Superglue - or rather more precisely, cyanoacrylates. But they’re variants designed to be less irritant and more supple than Home Depot Superglue.

I find “medical” cyanoacrylates problematic: my experience is that they provide immediate relief on small cuts and skin cracks, but they impede healing - probably because the cured stuff gets in the way of cells trying to bridge the wound and close it.