Looks like Fidesmo is now working with HID global. Should open some more industry doors to the expansion of chips 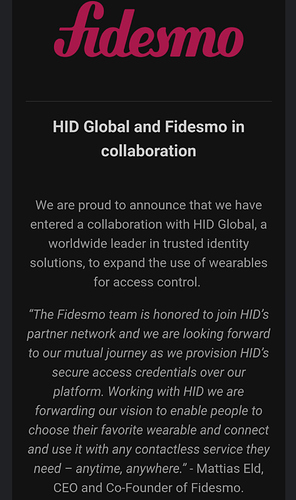 Would be nice if I could put my ID in my hand and have it be legal though.

I am not too keen on location tracking

Better throw away your phone then

Better throw away your phone then

I can/do leave it home when I want.

Well it’s not illegal, but if HID started selling systems that officially supported implants that would remove the stigma. So ya that would be cool.

Then stick to dumb RFID transponders and door openers, because anything smarter requiring exchanging data with a server in the hands of any for-profit company comes with almost guaranteed data raping and privacy invasion these days.

It’s not new either: Scott McNealy already knew it back in 1999 when he said “You have zero privacy - get over it”. Back then, I thought he was crazy and I laughed it off. Today, I ain’t laughing no more, cuz I can’t get over it…

Anyway, back on the topic of Fidesmo: they seem like good people. But there’s just no way I’ll ever believe they’ll extend their good manners as far as providing serious assurances that they won’t play dirty like everybody else in the big data sector. However nice they may be, there’s just too much money to be made to stick to principles - assuming they have principles in the first place.

That’s why, despite my technical interest, I’m not really all that keen on stepping into the world of crypto chips either. Dumb chips are dumb and they can’t do truly interesting things, but they don’t invade my privacy.

I just opened a proton mail account. I would like to think they leave my stuff alone. I pay them, so they shouldn’t need anything.

I agree, but you never know.

I’m not really all that keen on stepping into the world of crypto chips either. Dumb chips are dumb and they can’t do truly interesting things, but they don’t invade my privacy.

Good point also, but I am kinda dumb about chips. I need a smart one.

Then stick to dumb RFID transponders and door openers,

I think having a bank card is the extent of what I want past opening stuff. I would reconsider getting it if there was an easy way to track me with it.

but I am kinda dumb about chips. I need a smart one.

…can we maybe change the wording?

…can we maybe change the wording?

Taking your information with passion?

I think your idea of Rape and mine are two very different things!

f Rape and mine are too very different things!

You know when you have 2 choices to make, one is for sure not appropriate, the other reworded it into something companies still do, just ignoring the rape part.

@Backpackingvet proton is by far the best

I’m curious - what spawned this idea of location tracking?

The key word here is could because I still don’t see an HID applet on the Fidesmo app store. The problem here is that HID could simply restrict it’s SEOS applets to their own special Fidesmo powered HID tokens and not let the applet be freely deployed on the Fidesmo platform. Sometimes I want to believe that things will work out…

I’m curious - what spawned this idea of location tracking?

The HID global site has a section on tracking. I understand they cannot track a glass implant so easy, as in scanning it as you walk by. I am unsure of a flex as I am trying to understand the ones in my hand first.

I guess I am just wondering what they will do with the info that they share. I feel like some tracking of some sort has to be done and externally managed. Will they keep it to themselves? Will they sell off parts for profit?

I know very little of each company currently as my focus is on what I have and how to start building things. I am not attempting to accuse them of anything.

Or will it be managed by Vivokey(you)?

The HID global site has a section on tracking.

ah yeah… so this is asset tracking. This typically employs UHF tags because of their extended range and on-metal tag designs that reduce interference when applied to assets with metal bits. Typically panel antennas or gateways are deployed above or in front of doorways so assets that transit through these choke-points can be picked up by the system and the room where the asset it identified.

Other forms of asset tracking have to do with process control, wherein special panel readers are placed along points in a process… like under a table in an assembly line, or integrated into a piece of lab equipment to track what test tubes are loaded into the machine and when they are taken out, etc.

Employee tracking (people tracking) is not actually done, generally speaking. This is not a technical or moral issue, it’s simply not done because it’s not cost effective. Monitoring and tracking people around within a facility typically requires more effort and scrutiny and human resources than it’s worth. If “Employee A” is taking 45 minute bathroom breaks, someone is sure as hell going to notice that and correct it without some kind of tracking system telling them so.

In thinking back, the only actual people tracking technologies I’ve really seen used are active systems… badges with batteries inside that periodically beacon out a signal, or wifi systems that use client interactions and RSSI to locate people within a controlled space using mobile phones attached to the local wifi… with systems like those in place you can do things like analyze traffic patterns in a lab or factory or warehouse and re-organize things to be more efficient… but the point is, these are nothing like passive transponders like access badges or implants.

While it might be technically possible for access logs to be monitored (you came in the front entrance at 8:57am), they almost always are not. The logs exist yes, but nobody is doing a damn thing with them unless there is a security issue that warrants looking at them. Nowhere is this more evident than malicious badge cloning and access. A properly monitored system could easily detect a badge being used at the entrance, then the elevator, then the secure lab door, then 30 seconds later at the front entrance again… something physically impossible to accomplish, but the access log is not being monitored or analyzed it’s simply logging.

Anyway, the point is, your location can not be obtained with a passive chip implant like this… only your use of it can be logged… just like any badge would be.

so this is asset tracking

My place of employment does this. They also have it on equipment, so you can look up where something or someone is. UHF tags are used.

Anyway, the point is, your location can not be obtained with a passive chip implant like this…

I have caught on to that before I posted. I was talking more about usage, telling location. But also, it was a passing comment, I am not concerned about it to be honest.