Went to the mailbox today and look what arrived! Finally I would stop talking and start injecting. 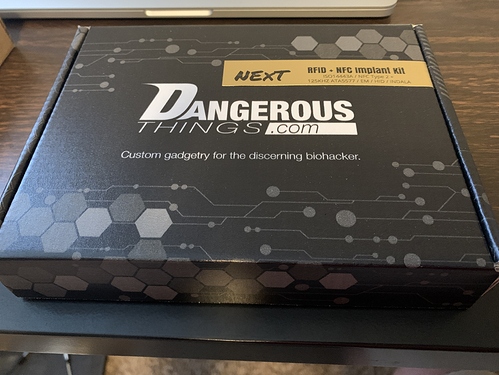 Couldn’t wait to get it in so I did just that. I got the Emla patch since I’m not that great with needles (although I keep getting things that require them). The patch gave me the extra bit of bravery to not think about the needle in my hand that I needed to get it done.

I went with an R2 position (top of hand, very middle, between bones). I marked out the absolute end point I didn’t want to exceed and a straight line that I wanted to follow. I installed bevel down. It was surprisingly easy to get the tip of the needle in but surprisingly hard to get it all the way in. I largely underestimated the difficulty of using one hand. I had very little pain until I was starting to get close to the end of the needle reach. I suddenly felt a sharp pain. I figured I was deep enough and decided to listen to my body. 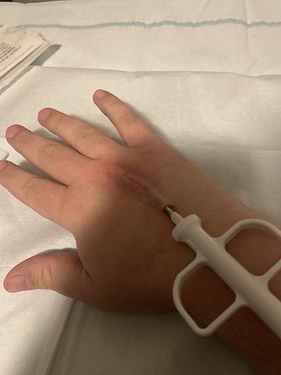 I pulled back, deposited the implant and pulled the needle out. Bleeding was low volume but it did continue for a while.

Once it stopped and I bandaged it up I tried to get a read with the Proxmark. I was able to read both the LF and HF immediately after bandaging!

Finally one of you! (a good thing?)

We are back under full lockdown in Melbourne, I have put off my order for the next lot of implants because I could never do a self install. Congrats, you are alot braver then I.

You could also order em and store em until you can find someone to do it for you, or work up the nerve to do it yourself. Them things don’t have an expiry date.

I could never do a self install

It wasn’t that bad. I started shaking in the middle so I stopped and took a breath. It went away and I finished. Until I hit that nerve, the worst part was peeling off the Emla patch and pulling all this hairs out

Now I just have to stop playing with it and let it heal. I keep touching it to double check it’s position.

I keep touching it to double check it’s position.

I did that for a few days after my recent foot implant, because I really wanted that implant to stay where I had installed it between my toes (it didn’t) and I didn’t know what to expect - and nobody did I think. Quite a few people wondered what I was doing standing on my feet, then suddenly dropping down as if doing a toe-touching exercise and massaging my foot for 20 seconds with my thumb several times a day

I would like to but I don’t think I should. I’ve flaked out twice in hospital having blood taken and had a funny turn at home using one of those finger pricking lancet things ffs. Just nothing I can do about it, totally uncontrollable.

I watched a bunch of videos and thought I could, but when I tried my brain just kept screaming at me that this was not ok and I couldn’t convince it otherwise. Thankfully my area opened back up soon after and I got a pro to do it. It really wasn’t even that bad, but I know I won’t try to do it myself again.

So I definitely give kudos to everyone being able to overcome that brain survival instinct!!

my brain just kept screaming at me

When I did my self-installs that’s also was really the hardest part for me.

How I got over that, was just trying to not think about it. Just telling myself this won’t hurt, probably doesn’t work for everyone though.

If you do decide to DIY an install, binder clips work to tent the skin. Left some red marks for a short while but it was better than not having another hand.

Actually played with this last night to see the logistics… still dont think I could do the self install.

Update: Took the tegaderm off after 48 hrs to have a look. I replaced it with a regular bandaid for cushioning as it feels bruised more than it looks. Now 4 days after implantation, under the bandaid it looks like this, a tiny half circle and a protruding capsule when I make a fist. 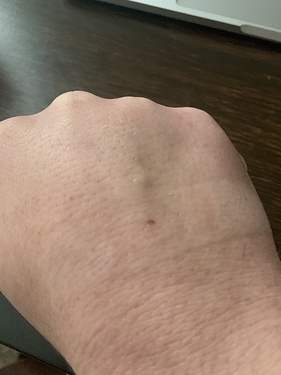 The first implant I got, I left the bandaid on forever, then changed it and cleaned the “wound” religiously for a week with rubbing alcohol, and avoided putting water on it in the shower as if it was a major surgery. Now I just get the implant in the morning and remove the bandaid in the afternoon

The entry hole has closed up nicely and is disappearing. The implant is on an angle of varying depths. It seems the end towards the knuckles has went low enough to be fairly flat on the skin. The other end seems to be pushed up and is protruding the skin if my hand isn’t laid out flat. See picture below where I marked the concerning end along with lines denoting the length of the implant. Should I be concerned that one end wants to point out? It’s still sore but my kid jumped on it yesterday and it was really painful so that may have delayed the time for all the bruising to disappear. Is one end poking out more a reason to be concerned? 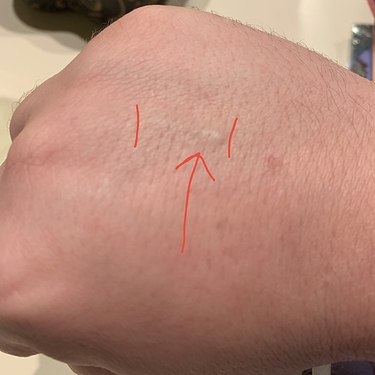 I’m new to this too, but mine did the same thing (NExT at R0) around the same time ~7-8 days in. I freaked and played with it a little bit, trying to wiggle it down. I don’t think I actually did enough to change anything but it did settle a few days after and now it sits pretty flat.

Should I be concerned that one end wants to point out?

My personal opinion, i wouldn’t say be concerned, since it doesnt sound like it is causing you pain, but I would say be aware… hopefully in time it will find its home, but until then, when reaching into tight spaces, engine bays, Hand cracks whilst rock climbing

your pockets when you don’t want to pay

with the barb catching on the way out…

8 month update: The NExT has indeed settled down so it isn’t a fishhook anymore. It is still visible and even is a dark line on my hand still. I’ve had people ask how I got the bruise but it’s the implant. I can push on one end or the other and make it seesaw the other end up a bit. When I do this the middle skin goes down with the implant though. I wonder if it’s a bit shallow in the middle and the skin is bound to it. This also might explain why I always get easy LF coupling with a proxmark easy. The only real downside to this location is that if you push the skin sideways the implant can ride above a bone. If you reach into a tight space and it does this and then has a bit of a crushing force it hurts like a bitch. Otherwise I’ve been real satisfied with the location.