Fun story about being a cyborg

My perspective has changed a little over the years. I’m not interested in it. But, if it’s legal, and it’s not being shoved in my face, what business is it of mine?

Shrooms, however. There is some real intersting stuff being done with treating depression. There was a time when I could have desperately used that.

I agree, if someone wants to do drugs that doesn’t hurt me at all. I compare it to implants. It doesn’t affect me one bit.

I looked into shrooms for PTSD once I got out of the military. It helped significantly.

I agree, if someone wants to do drugs that doesn’t hurt me at all. I compare it to implants. It doesn’t affect me one bit.

I sorta agree. But I also do not like cartels and the “infrastructure” around illegal drugs, because that “industry” dose hurt people.

I agree completely, that is why I have never really ventured away from things that cannot be grown. I can guarantee that anything I do doesn’t have cartel involved. Buddy grew the shrooms, and 1p lsd is a research chemical.

Edit: I also have zero interest in other drugs to begin with, so that helps.

I can’t say I reccomend anyone do illegal drugs. But it is an eyeopener and a gamechanger.

Damn right: I did acid once - only once! - in my life 35 years ago, and I did such a bad trip that I’m still psychologically scarred to this day. I kid you not. It’s changed my life, and not for the better in my case.

I apologize to hear that. I hope everything is manageable for you now, and you are on a path for recovery.

It’s just that something wicked has been branded permanently in the soft tissue between my ears. Hard to describe, but I was changed that day. The surprising thing is that it only took one.

Having said that, I know a lot of people who were changed for the better also. I wish it had happened to me.

You don’t have to explain, I think I can understand.

I would definitely be on the “I don’t care what other folks do that doesn’t affect me” camp. I have played with a few drugs over the years, and am a semi-regular weed user (though that’s been legal here for a little while, and even before that, I had a prescription, so… yeah), but like… to each their own and all that for sure.

That was the second fastest I’ve ever thrown somebody out of my shop.

What was the first fastest!?

I second Amal on this, @ODaily.

I’m the only “enhanced” one in the house, but I love having fun with little kids - my own have gotten too old, but my nieces are still at a fun age. After my wife had hip surgery, docs had her using a passive perpetual motion machine for therapy every night. One of these: https://files.btlnet.com/cor/file_items/7f5fb1ea-2302-4575-9b8f-986059a19962/BTL-CPMotion_applications_sl_tc_1448285783_original.gif (Hoping that hotlinking isn’t a no-no.)

The kids didn’t believe their crazy uncle when I explained how my wife is part robot… Then they walked in and saw her strapped to that thing. lol. I told them she has to tighten up all the joints at night so parts don’t fall off.

What was the first fastest!?

I always worry I’m going to be misundertood due to vagueness, which usually causes me to be overspecific. I’m afraid the story isn’t that grand, but since you asked…

The same shop, around the same timeframe, I was in my twenties, I think.
The shop was in a kinda sorta industrial area that was very visible from the road. I always had the door open and lights on when I was there, so lots of pop-in’s from other shade tree mechanics and gearheads.

One day a guy I knew stopped in, looking for something (god knows what now) and while I was standing there talking to him he just casually spit his tobacco spit right on the floor not two feet from where I’d just crawled out from under a car (transmission work).

I LIT HIS ASS UP. I may have invoked his mother and his breeding. I certainly made my feelings on the matter known. He immediately apologized and cleaned it up while I watched, STEAMING.

I managed to calm down and be fairly reasonable after he cleaned it up and we returned to what he had stopped by for, and then he just calmly does it again. Let me repeat that. The dumbass spit on my floor right in front of me a second time.

He looked back at me before it even hit the floor as I switched into rage mode and started towards him, and he had the good sense to head out as I immediately let him know to GTFO!

And that is the story of the fastest eviction I ever performed.

If people are gonna be nasty in their own places, fine. Eww, but fine.
But not where I’m gonna be. Not in my place, in my space. I just won’t tolerate it.

I managed to calm down and be fairly reasonable after he cleaned it up and we returned to what he had stopped by for, and then he just calmly does it again. Let me repeat that. The dumbass spit on my floor right in front of me a second time.

haha oh man… it’s obviously become one of those things he just does without thinking… but still… wtf… gross.

Sorry, not cyborg related either

he just casually spit his tobacco spit right on the floor

Have you ever been to Papua New Guinea?
The locals love chewing Betel Nut. and they spit it everywhere, their footpaths ( Sidewalk in USA speak ) are covered in red spit. 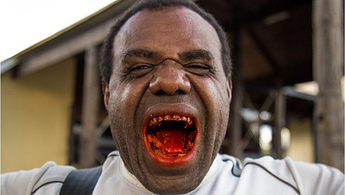 image976×552 108 KB
There are a few other countries it is also popular in, but PNG is the MOST popular I have seen.
I even saw young kids chewing it.
It is addictive and PNG have one of the highest rates of oral cancer in the world. 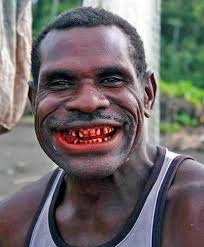 That is nuts, that amount of entitlement is asinine.

I am going to point out I was trying to edit that. Not delete it.

On mobile, as I don’t have a home computer, (I should just go to the pawn store and get a cheapo and put Ubuntu on it.) But I can’t see the whole pop up.

One of the many things on my to do list is get more in to diving, got my advanced PADI and a few specialties but kinda want to get int to re breathers etc.

Skip the spit though!

I could try and explain it, but my words wouldn’t do it justice.
If you ever have the opportunity - GO
A lot of WW II Wrecks ( Ships, Aircraft, Tanks!!! )
Beautiful warm and clear water
Sea life amazing

Just showed my 4 yo some things I can have my phone load up by waving it over my hand now, and he can’t decide if he likes that i’m a “robot dad” now or not, but said he would let me know later if he liked it haha. Fair enough kid.

UPDATE “It’s ok if you want to be a robot. Can I play Yoshi?”