So I have a few ideas I’d like to try with glass capsule implants. Is there a resource out there on how to do that at home? I know I’ll probably have to flame seal it, but any information would be great.

This thread may be of some interest

I need one ounce of Gold encapsulated for implant. A fallback if you will.

The problem with doing it at home is sealing the glass. Say you were to buy some Schott VivoTag glass rods. One end is pre-sealed. You make your circuit or whatever other contents you want in there and pop it in. You source some biocompatible resin, put that in there and cure it. Then you need to seal the other end somehow.

If you flame seal it, you’re going to run into a host of issues. You’re gonna have to get it really hot for a minute or more, which is going to really mess up the resin and the other content. Once it’s hot enough, you have to pinch it closed somehow and make sure the seal is perfect. You can’t just pinch it though, because the end has to be round and free of cavities that can be biofouled. As it cools the sealed glass might also crack due to mechanical stress and pressure changes inside the implant.

What you really need to do (and what DT does) is use a fiber laser. That heats the end quickly and precisely enough to create a good bioproof seal without destroying the contents. Those are pretty expensive though ($2000+). The Schott website I linked to earlier did say you could use a Nd-YAG laser though, which is pretty cheap. That’s what they use in those laser hair removal units, which are ~$500. I don’t know if it would be strong enough. You’d basically put the implant in the chuck of a lathe or drill running slowly, and align the laser so that as the glass rotated the edge would be bombarded by laser pulses. Then maybe you could get some fine tools and slowly fold the edge over into the center. Then you’d probably have to sand it and buff it, then maybe hit it with a torch for a sec to let it recrystallize with a smoother surface finish. 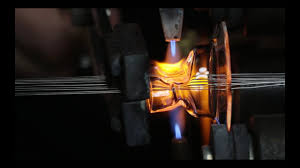 Not great for electronics.

one ounce of Gold

Of course this would be a troy ounce??

Maybe you could bribe your way into getting a prototype loaded into glass for you. I’d recommend having a solid prototype though, might be pricey.

Of course this would be a troy ounce??

Would it be any other kind of ounce?

You’d basically put the implant in the chuck of a lathe or drill running slowly, and align the laser so that as the glass rotated

This is how you should deal with the flame sealing process as well. With a proper flame it should collapse inward as it spins past the flame so you don’t have to pinch it. The down sides are mechanical stress as the glass cools, heat transference during melting, impurities mixing into the glass, etc. Also you need a much longer glass tube because the flame process results in a really ugly shape at the end… see here; Cyberise NFCxLED