I received my Halo scanner in the mail yesterday, and played with it some, to see what it can do. In this video, the dude scans his xEM chip also - which, I assume, he left in 40-bit UID EM41xx mode.

So I tried to scan my own, non-DT, EM4200 implant. No matter how much I tried, the Halo reported nothing. I doubt very much it didn’t pick it up though, because my EM implant is oversized and usually has a pretty good read range. More likely, the Halo is very particular with what type of EM chip it supports, and really, REALLY wants a EM4102 and nothing else.

Anyhow, I looked at the scanner’s specs to try and figure out what it supports, and that page says “Reads all FDX-B 15 digit, FDX-A 10 digit and EM4102 (BME)chips”. Anybody knows what BME stands for? I’ve googled it up several times in different contexts, but nothing much turns up. The best guess I have is that it stands for “bio-medical equipment”, but that’s probably not it.

Side question about the Halo scanner - or rather, the Scanner Angel software that loads up a database of lost pets into the unit when you charge it with a Windows PC: anybody knows where that program stores the database?

Normally the pets’ statuses in it are supposed to be one of “lost”, “recovered” and a couple other statuses or something, and the Halo scanner is supposed to display it when it encounters a matching UID. I was goofing around with the idea of figuring out the format of the database, and if possible, patching it to make my Halo scanner displays my status as “fabulous” when it scans my xBT

Trouble is, I can’t find it. I only find a big, mostly empty file with a few phone numbers of shelters around the world and a dozen garbled entries. That can’t be it.

A quick search brings up (bme) base metal electrode. Don’t know if that’s it or not but might be a place to start. https://www.avx.com/products/ceramic-capacitors/surface-mount/militaryaerospace/escc-3009041-space-level-bme-x7r-mlcc/

I don’t have a halo, and it seems that the Program is built to automatically pull the updated database/registry when it detects the scanner is attached. I’m still kinda curious to see what the file you found looks like, would you be cool posting it here or DM-ing me?

I just sent you the file. Let me know if the upload thingy worked.
It’s so empty it went from 2.5M to 4.5K when I zipped it

In this video, the dude scans his xEM chip also - which, I assume, he left in 40-bit UID EM41xx mode.

That’s @Vicarious in that video, and funny enough the best way to scan a chip implant in your hand is to actually put it inside the hole… basically put your hand through the hole in the center and when the tag passes through the reader will read it much more readily than trying to position it on the outside of the scanner body. Try that?

put your hand through the hole in the center and when the tag passes through the reader will read it much more readily than trying to position it on the outside of the scanner body. Try that?

Also, I tried passing my hand through upside down - just in case the chip needed to face the other way - and I got stuck, much to the amusement of the missus. You managed to make me look like a fool. Nice trick Amal

Seriously though, you’re right: the xBT reads from miles away while still inside the needle when I present it through the loop, orthogonal to the reader - as opposed to flat against the backside. Amazing!

Don’t know if it’s an undocumented feature (bug) or not, but I’ve noticed before that the Halo reader doesn’t support all UID numbers.

My chip isn’t a xEM and it’s not writable. I’ll read the UID tomorrow. The reader is in the other room and it’s 2am here: I’ll wake everybody up if I go dig it up now

Did you notice the bug/feature only with EM chip or with FDX chips also? Cuz if it’s the later, it would be a real bummer for shelters and vets: some chipped dogs would go undetected. 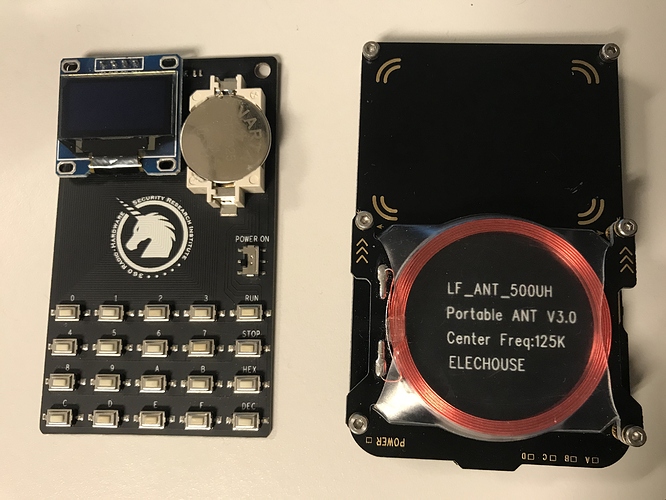 do you know which UID number your xEM has?

Here’s the lowdown on my chip:

Incidentally, I have a “real” EM4200 fob that my Halo scanner reads with great difficulty if I present it sideways just right on the edge of the reader at a very precise location near the CE symbol, once every 10 tries or so. Maybe my scanner is just exceedingly bad at reading EM chips, and it simply doesn’t have a snowball’s chance in hell to read my implant if it’s already struggling with a full-size fob. 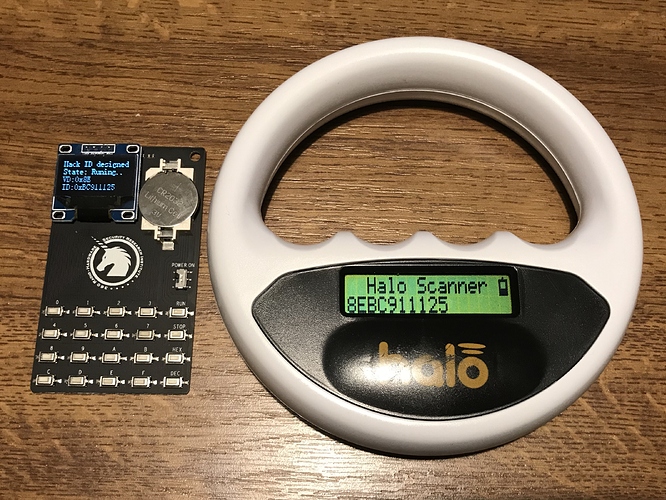 I think the Halo reader has a problem with zero’s.

Wow, that’s such a weird bug

I’ll report it to the maker. There’s got to be a reason for this, surely…