Hole from needle not closed after 3 weeks

I implanted the xLED roughly 3 weeks ago. As I mentioned in another post the procedure did not go super well as I had to shove the xLED in by hand as I took the needle out too early. This led to the hole being directly above the implant. Aside from not closing it’s healed perfectly fine. There’s been no infection, itching, etc. But if I stretch the skin I can see the tag under the hole. The hole has been getting smaller, to the point that unless a great force is applied, the tag definitely would not slide out. I’m wondering if this is happening because there is no fascia under the skin at the injection site. I’m no doctor so my apologies if it’s a bit of a stupid question.

I would get it out. Even if the wound closes up, it’s probably too close to the epidermis (read: in the wrong skin layer) and your skin’s always gonna be too thin there. I ain’t no doctor neither, so just a guess…

The hole has been getting smaller, to the point that unless a great force is applied

We’ll stop applying great force! Haha… but seriously, we can’t offer medical advice on this one… it would be a liability. That said, I personally think it’s up to you. If you want to let it ride and see if your body will naturally sort itself out I’d put some antiseptic gel and a bandage on it for now… and stop trying to pry it open… you definitely introduce new germs into the wound every time you do that… so gel, bandage, and let it ride.

If you want to have a professional reinstall it for you, then get it removed and take it to a professional piercer who can install it with a needle and taper procedure after autoclaving it to ensure its sterilized.

Not a doctor either, but my concern would be something getting into the hole and then growing, like a cyst kinda.

Personally, I would re install

This is actually something that could be handled by Teladoc or one of the similar services. I don’t know what your financial situation is, but you should only take medical advice from professionals and not internet strangers.

I think I’ll let it ride out. Unless it starts to look bad or stops healing completely. I’ve been cleaning it regularly and I’ve had waterproof Band-Aids on it fairly consistently. If it heals then that’s would be great. If it stops or starts looking bad then I’ll cut it out and resterilize, possibly even try a new location like the neck!

possibly even try a new location like the neck!

I am requesting a video of this install please, and good luck with it.

How’s the hole looking? Still kind of hurts. At the touch that is 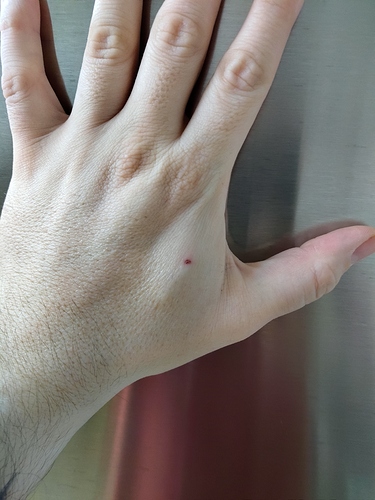 The hole is much smaller now, it still seems like it’s closing which is good to see. I was more so curious if anyone else has had a similar experience. The xLED is 3mm so the hole to begin with was rather large. Now I’d say it’s .7mm (referencing pencil lead)

Just an update but the hole is finally closed. The adhesive strength of the scab was enough to hold it shut. Really curious why it took so long to heal. I’ve had some fairly serious wounds that took around the same amount of time to heal. And I get that it’s a 3mm needle going under the skin, but still a fairly small hole in the end. Anyways thanks for the advice hopefully this thread helps anyone in the future who might have the same issue. It’s good that I botched it I suppose, more info on what not to do!

Glad to hear it all got better and sorted out my guy!