In theory is it possible to Bio Glass a round Magnet for Sensing?

But in theory is it possible to Bio Glass a round Magnet for Sensing?

One of the largest issues I can think of offhand is that of heating up the magnet too much. There’s a LOT of factors in encapsulating a magnet to keep it safe from the body without messing with the actual fields the magnet puts out.

Most magnets are currently TiN or silicone coated, with a couple people playing around with PET coatings as a possibility.

Well that’s a shame, I can now see this is a bigger issue then I first thought, So how was “DT” able to encapsulate a stronger lifting magnet like the “xG3” ?

BTW Thanks for taking the time to explain this to me, I truly appreciate it!

That would be a question for Amal or someone similarly experienced with encapsulation. There’s roughly a 200C overlap between where glass is malleable (glass-blowing temperature) and where the magnet will deteriorate. Those numbers fluctuate depending on a few factors, including the amount of time the magnet is heated (a magnet can lose it’s juju at as low as 80C if exposed long enough)

They may use a mold, or my guess would be they use like a glass tube, stick in the magnet and some epoxy, and once it’s set, seal the end. Keeping in mind I’ve no idea about manufacturing these things, and the slew of other nuances behind not breaking the magnet.

If you’re Suuuuper eager to get a magnet, Silicone works, but is a bit bulky, and not as sensitive as the TiN coated ones. Massive downside to TiN magnets though, is they’ve got a life of two years or less, before the body breaks the coating and starts to neutralize the magnet/absorb it into the body, as @Satur9 can attest to.

Some of my info may be off though, it’s been a couple years since I’ve done hard research into sensing magnets.

Pretty sure they use pre-made glass tubes, and seal with “real-quick” laser to avoid heat extremes. (Edit, note this is general tech, not meant to be about the XG3.)

Another issue is mass. You want a super light magnet that’s very powerful for sensing. Adding a bunch of glass (mass) to it, reduces it’s usefullness. (Edit, this does apply to why you can have an XG3 but not a sensory magnet.)

Don’t let the no answers get you down. Keep researching. Today’s dumb question is tommorrow’s innovative product!

If you are up for experimentation it might be worth contacting @Vicarious, for a homebrew solution, he did a neodymium encased in Sugru 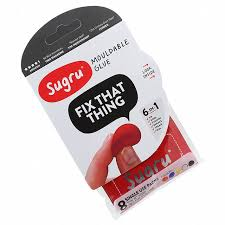 I’m sure he could give you some pointers…

Wow thanks again for all that info, This defiantly helps me paint a picture of the current issues revolving magnets. The Silicone idea is interesting while we wait for a better solution, The only issue I might see with silicone though would be the possible cracking that “Amal” talked about in his “Good Bye Magnets” Video…

Interesting, I didn’t know that’s how they usually do it, and BTW thanks for the kind words, I don’t plan on giving up yet…

Thank you, I might be willing to experiment so I’ll give “Vicarious” a shout and see if he’s willing to share some knowledge…

is it possible to Bio Glass a round Magnet for Sensing?

the primary issue is that glass needs a lot of space on either end of the tube… and a sensing magnet is a balancing act between mass and field strength. That’s why our attempt with the m31 used a TiN coating that was only 13 micron thick… because the rest of the mass involved was there to create field strength. Dead weight will only add to the inertia of the magnet, dulling the response performance of the device.

Now imagine a sensing magnet that is teeny tiny to fit in the finger… but encased in glass with it’s inefficient use of mass and space at either end… it would look like a glass ball with a magnetic disc inside, probably with more dead weight in glass than it has magnet… it would be a pretty useless sensing implant.

I was inspired by Lepht Anonym’s talk at 27C3 (27th Chaos Communication Congress) in Berlin, Germany in December 2010: https://media.ccc.de/v/27c3-4003-en-cybernetics_for_the_masses

Lepht Anonym's blog about biohacking, grinding, transhumanism and the unending suckage of meatspace.

However, in my opinion the xG3 also works for sensing. Previously I always assumed that magnets must be inside the fingertip to sense magnetic and electromagnetic fields. Recently I had an xG3 implanted next to the thumb metacarpal bone and despite that it’s not a fingertip, I can still sense magnetic and electromagnetic fields from short distances with it.

in my opinion the xG3 also works for sensing.

, May I ask if you’ve tried using the “xG3” over small electrical wires and possibly traces on a PCB yet?

If so was it powerful enough to tell the difference between live and dead wires/traces?

If not, “Pilgrimsmaster” mentioned that you attempted a Home-brew solution “neodymium encased in Sugru” If you don’t mind me asking was the end result worth it compared to traditional Silicone and the current “xG3” Magnet?

BTW thanks for jumping into the thread…

If so was it powerful enough to tell the difference between live and dead wires/traces?

Just for some extra input, I’ve tried an xG3 and two different dedicated sensing magnets, and I’ve had very little success detecting “live” wires. While the Meissner’s Corpuscles operate very well in the 50-60hz range, the amount of field generated by a single-turn coil (power cord) is vanishingly small. Imagine if it was noticeable, small steel objects would visibly vibrate and heat up when left near wiring.

You can only detect very high current or erratic power transmission (think florescent lights). I’ve tried detecting AC power traces on a several PCBs with no luck. Transformers, on the other hand, are very easy to detect. Their whole purpose is to turn electricity into magnetism, though, so it makes sense.

I truly appreciate your input, But so many claim they can feel the difference between a flowing and non flowing current, Are those claims simply misinformation being spread around the internet or is it simply some people have more sensitive Nerve Endings then others?

Also, may I ask where you exactly implanted your xG3 and what have you personally found it useful for besides the obvious things?

BTW thanks again for providing so much detailed information I truly appreciate it!

But so many claim they can feel the difference between a flowing and non flowing current, Are those claims simply misinformation being spread around the internet

I don’t think that there are many people actually describing the experience of detecting current flowing through the power cords of ordinary equipment. I think there are many people who are interested in magnet implants talking about the idea of detecting live wires. The distinction is level of specificity. I searched through the biohack forum and pretty much every post describing sensing wires also said only very high current situations.

You were asking about PCB traces, which is pretty specific. As an EE I can give you a more detailed rundown.

Also, may I ask where you exactly implanted your xG3 and what have you personally found it useful for besides the obvious things?

I’m speaking mostly from my experience with dedicated sensing magnets. My data on xG3 sensing will be skewed, because it is implanted in my tragus. Better to rely on Vicarious or another for that. I have tried to sense with it, but there aren’t as many nerve endings there as there are in the fingertip and it’s kinda awkward to “listen” to things that are potentially high voltage

If it’s not clear from this list, the reason why you can’t sense live wires or low current draw devices is just that - a lack of current. Electromagnetic fields from straight wire (not coiled around a saturation material) go up in strength as a result of current flow. A “live” wire may have the electrical potential of 240v and not have any current flowing, but if you touch it you’ll be in a bad way.

Modern lamps, laptop chargers, computers, etc. are all really low power devices these days… hence no sensations… but a heater is always going to be a high current draw when on full, especially here in the USA where we have 120v mains which requires double the current of a 240v heater for the same wattage and BTU output… the pulse of current rushing into a device when you turn it on … this is why the power company wants you to turn off devices when the power goes out… because if they are all left on and the power comes back, the inrush current from millions of devices in thousands of homes can easily oversubscribe the grid and cause further damage…

Anyway, yes, the reports of “I can sense live wires” tend to be greatly exaggerated… and in most cases I would guess that these are tests conducted by the user knowing the status of the wire in question, and it’s self-induced sensation… phantom tactile sensations. If they were given a proper test with 5 wires and they had to detect “the live one”, especially if there was no load (no current draw) on the wires, they would likely do no better than chance detecting the live wire from the bunch.

What the hell is a non-flowing current?