Little advice (that actually helps a lot): Keep the arm up as much as you can, works wonders against the swelling!

Wish you all the best

You got some vitamins to? Thats a big help with the collagen building.

Think I’m going to skip the vitamins for now, I think I’m in the “if wants to move it’s going to” camp

But now I’m curious about mifare, how close can it be to xNT chips?

You’ll want good space so your reader doesn’t get confused.

Ok so crosstalk is still a thing

Can a xm1 work as a nfc? Confused on the overlap

Confused on the overlap

For example, you approach a hotel door reader and you try to use your xM1, but the reader “sees” your xNT instead

Nono I understand the crosstalk interference

I meant will a xm1 work as a xNT? They are both nfc but different

I expect a xNT can’t be a mifare

Can a xm1 work as a nfc? Confused on the overlap

Mifare is not NFC compliant… it is not one of the NFC Forum’s 5 NFC “types”. The company behind it, NXP, has created a bullshit workaround that only works if your phone has an NFC reader chip from NXP inside… but it’s still not standards compliant. There are other more long winded posts on the forum about this…

Difference between XM1 and XNT Support

Both chips are 13.56MHz and ISO14443A compliant, but they have dramatically different memory structures and features. The xNT is based on the NTAG216 chip which is also NFC Type 2 compliant, and the xM1+ is based on a Chinese clone of a Mifare Classic 1k chip, which is not NFC compliant. Many legacy systems still use the Mifare Classic, so the xM1+ might be useful for people who want to clone their Mifare Classic 1K cards to an implant. If you do not have a specific need for the xM1+ I would n…

Mifare also sucks as a term.

HF is “high frequency” and means 13.56MHz LF is “low frequency” and means 125kHz - 134kHz and for all intents and purposes they are the same. For example, the Halo reader can read both 125kHz and 134kHz tags with the same antenna because basically they are so close they are the same when it comes to coupling. The major differences between any RFID tags is the protocols, memory structures, data encodings, and command sets. Mifare is a marketing term that has been bastardized so badly it’s alm…

Ok sorry I didn’t see that differences thread, I was just suddenly concerned the xm1 did everything the xNT did and more

So I’ll get a xm1 when I need xm1 things

Mifare is not NFC compliant

It answers to select. What more do you want?

More seriously, Mifare has one advantage: when you see it writen alongside NTAG and a whole host of other chip types in an NFC lock’s spec sheet, you can be fairly sure it’ll work with the UID alone (and sometimes not even the full UID, if you’ve never seen that video).

Depending on the security of your application, it can be useful: considering how few NFC locks work with implants, when you find one, it’s good to know it won’t require a special chip.

Case in point: I had the flexM1 put in my hand yesterday pretty much for the benefit of my Yale Doorman V2N front door lock alone, which works only with Mifare Classics. I really could have done without it, if that thing had worked with other chips also. But at least it’s more secure I guess…

So I notice I’m starting to get a little spot form on my hand, pretty sure its located at the end of the chip 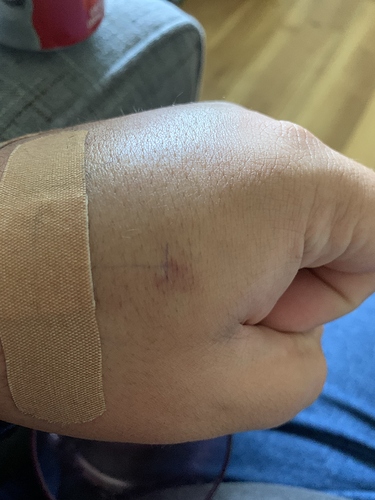 Pretty normal as your body starts to heal the bruising/bleeding up. It can grow and might even get darker before starting to yellow and fade away. So long as you’re not in pain, there isn’t abnormal inflammation or some kind of rash, you’re probably good

Keep an eye on it of course, and give us an update - but bruises are often weird lil’ shape shifters

Still a little tender with a smidge of swelling, but it sure looks like the end of the chip rammed from the inside

I saw the tiniest blink at the body mod shop

Amal, I played around with the fake Dsruptive xSIID in its injector, and I can get to light up a bit with my DL533-XL long range reader when it’s exactly at the right spot, with about a fourth of the implant sticking out inside the bevel.

But here’s the rub: I just realized the LED is only visible from the side. It does shine through the end of the glass vessel, but the weld is rounded, so it acts as a high power diverging lens. If you look at the weld dead in line with the implant, you can’t see anything at all

So even if it does light up inside the needle, there isn’t a chance in hell of seeing it from the outside anyway. Duh, I didn’t think about that one…

If one wanted to devise a test after manufacture, I think the only viable option would be to have some kind of plastic spring, or springy tab, at the bottom of the needle cap. Then it would be possible to depress the plunger and push the chip half-way out to check, then the tab would push the chip back into the needle when the plunger is retracted, without ever exposing the needle. Probably too much trouble for the benefit though…

Took 8 days but I’m getting consistent dim green now, excited for it to continue getting brighter and brighter

Also, might be my imagination, or hair on my hand but I swear I can feel when it pulses (iOS)

Also, might be my imagination, or hair on my hand but I swear I can feel when it pulses (iOS)

I can actually feel when my high frequency tags are being written to. I dont think its your imagination

Poking away while its healing will promote swelling so I’d advise against it. You have seen it light up etc so its there and works so just let it heal for a couple weeks then you’ll be good to go.

I’ve been very good about not poking at it

Problem I think is, I’m what you might call an “active” sleeper lol

…I’d guess this is my problem

It’s currently back just as bright if not brighter,
so now I’m scratching my head wondering if actually disappeared, or if the lights at work are just too bright to see it