(@Ottomagne: yours on the wrist didn’t move at all, did it?)

I would say that I didn’t notice any movement in it. I was never particularly interested in the exact orientation of the LEDs, so I can’t say that I know the exact orientation they were put in and if that changed, but I was looking at it often that first week, and I didn’t notice any real movement on it, so I’d say that if it did rotate at all, it was very minor comparatively to the hand installs.

I’m thinking that what actually rotates the implant are your tendons. Mine are very visible and just by moving my fingers I can see a lot of movements in my tendons, maybe this is enough to rotate it before it’s fully healed

Yep, I think this is probably a big culprit. More specifically, I think the unique layout of the tendons in the hand make it particularly prone to moving the implant. As far as I can tell, the same tendons that are present in the hand actually run under my implant at the wrist, but because they’re bundled together pretty closely, any sort of flexion in them doesn’t offer a particularly strong force on the implant above it. Comparatively, the tendons in the hands are a lot more spread out, so when you flex a particular finger/group of fingers, the force applied to the implant is a lot more spread out and could, in theory, make it more prone to rotating because of that.

I’m not particularly well-versed in human anatomy, so I can’t say for sure that’s what’s happening, but that feels like the most logical explanation on why they would be rotating more in the hand than where I got mine.

@Doubt6 and @Ottomagne, I think both of this is definitely true. Addtionally, when doing a pocket inside the skin, it is loose and fills with liquid of all kind, so I think the implant is kind of “floating” in it, and especially since it is very thin, it might be pushed around a lot easier than the higher silicone implants. And you can’t really fixate it, for there are no edges of the implant that rise above skin level (at least not in the first days - and after that, fixating doesn’t make any sense at all).

I’m not too annoyed by that, honestly - I rather feel sorry for the efforts Arnulf put in placing it perfectly; but it still looks pretty cool (though still with very “red” LED

I am still trying to think of sth to stop the rotation. I would love to incorporate the LEDs into some tattoo…

I don’t know what form factors are planned for the future, but if there would be a chip that is kind of rectangular or longish in a way, that should work… or a chip with a somehow central LED, but if I recall correctly, that’s hard (or impossible) to design.

Maybe it would have worked if we taped it in place, but that was too much of a risk due to the temperatures

maybe a more rounded triangle shape? (like guitar pick or rotary engine shape) I don’t know how feasible it’d be but it might limit how much rotation actually happens

How would a single 2mm dot of parylene work? Just put it on the far edge.

This is the concept I am thinking of going for, though the total width would have to be bumped out to probably 46mm or so to make this work… if not 50mm. 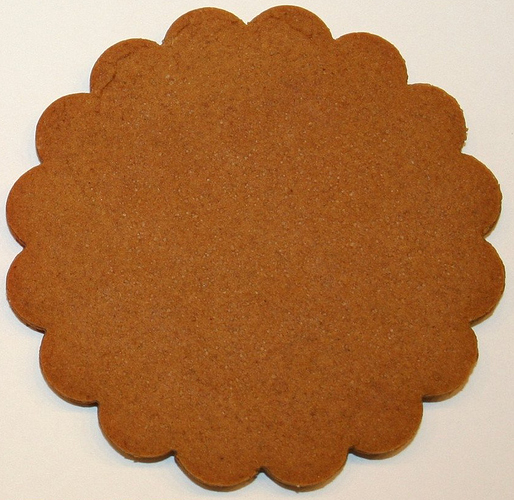 How would a single 2mm dot of parylene work?

parylene application is a serous pain in the ass… it’s done in special vacuum chamber and the monomer is like basically sand-blasted onto the target as a dust or powder and the impact sort of links the chunky bits of each particle together. it’s laughable it even works.

Why not just a single rounded off tab on the edge? Or two, opposite sides, if that’s not enough.

This is the concept I am thinking of going for

I’m not sure if this will work, except for using much larger “bumps”… The pocket in the skin is, at least in the beginning, not tight around the edge, so I don’t think it would grip it there…

Why not just a single rounded off tab on the edge? Or two, opposite sides, if that’s not enough.

That might (!) work better - and, if the two tabs were flexible, they could be inserted through a smaller gap which would help holding everything in place…

Yours is probably the most flexible of all. I’m currious to see if the hole will show under the skin.

I hope it does. It’d be a good indication that the fascia has reconnected there.

As someone who is completely non-qualified to have an opinion on this - here is my opinion!

I think cog shape may not work as you’re suggesting, the advantage of Rosco’s suggestion is definitely that the pocket wouldn’t be circular, so it wouldn’t be able to rotate for the same reason a flexM1 can’t rotate.

Yep, that’s what I was thinking as well. Additionally, it would still keep the implant “relatively” small - a 50mm implant might be difficult for some hands already (mine couldn’t be much bigger, honestly), while just putting a little addtional tab “somewhere” should be possible most of the time.

Just one detail: mine has completely stopped spinning after 2 weeks. Spinning doesn’t seem to be a long term issue as we expected. The skin has tighten over it now and it doesn’t move at all.
If you were to make a cog shape it would only be useful for initial placement but the shape would show through the skin forever. Also I’m woried that bumps on the edges would not be that effective during the first two weeks when the pocket is wider than the implant making it useless

Couldn’t it come with a few very small holes through the overhang around the perimeter (like 1mm or something): the piercer could thread a suture wire through the appropriate hole, insert the implant leaving the wire hanging out, stitch up the wound, and when it’s all nice and closed up, the stitches and the positioning wire are pulled out.

insert the implant leaving the wire hanging out

I somehow like the idea, but…
Hmmm… not so familiar with all that suturing stuff, but the wire has to be relatively long (the suture has to be some place away from the actual implant), and I’m not sure if it could hold everything in place. Another problem might be, when pulling it out, it might pull some germs or whatever in - that’s not such a problem at the suture itself, for it is pretty much on the surface, but irritating the pocket again would be something I’d like to avoid.

This looks like the best option so far, to me at least.