I might add a kill switch for use if I know I’m gonna park it for awhile. But… Really trying to avoid adding anything that will detract from the one handed Jedi mind trick aspect of it.

Does NOT account for power used during periodic reading, or parasitic draw of the charger.

I really want at least a week.

Yeah, in your early post I did a rough working of 9 days for you, before @Satur9 went all beautiful mind on the calculator

A week is GOOD, But (no calcs) a couple of months BETTER.

I have been thinking about a momentary solution for you, difficult without physically standing infront of your toolbox, but the ideas I had were.
a pressure switch like mine but smaller. (they do sell them) but where to install? 160mm x 160mm.
I wondered the obvious like on the floor, but, dirt, damage, moving, so thought about with knee, or if you could put it by the reader but not sure if you could contort you hand enough.
Then I thought, about a capacitive touch sensor ( <5ųA standby) where your hand would “naturally” lie ( Still viable, I might grab one and give it a crack.
I also thought about, a momentary button or the capacitive sensor right on the lid where you would naturally lift it.
so you would.

I’ll keep thinking on it…

Eventually, I’ll be changing back to a machine shop job, which is what this was for. Chips / shavings destroy anything on the floor.

Then I thought, about a capacitive touch sensor

Like a touch lamp? Interesting. You could literally touch the box anywhere? I’ve no idea how those work, but now I’m inclined to find out.

Sleep first though. So so tired.

Totally random thought. Put a momentary switch under the lid, and spring load the lid just enough to keep it up. Movement would be less than 1/8" but doable.

You’d be dependent on the capacitor / relay “hang” time.
Still gonna see if I can do without. The simpler the solution, the less to go wrong.

I was thinking smaller scale for the touch capacitor, pcb stamp size, mounted next to / under reader antenna.

Yes, I thought about switch under the lid also but I was thinking pressure mat, ruled it out for impractibility.
Though your Momentary switch much better idea, smaller and easier to install.

PIR sensor right next to the reader? That way you maintain the whole hand wavy magic bit. You could even remove the white dome lense, since you don’t need a very wide angle. They consume less than 2mA, so it’s not as power efficient as a momentary switch, but it would bump you from 254hrs to 2000hrs between charge.

If you want a capacitive touch module, you could use a momentary one like this from Adafruit. It can be modified to run at 50uA. Hypothetically you could use the entire toolbox as the touch sensor, you would just need to get to the metal under the paint.

I THINK there’s a big enough space under the bottom drawer if I built them flat.

I want to chase efficiency first though. So I separated the ground wires from the battery pack in an attempt to measure the amperage draw of the system, and the loss via the charger. Keep in mind, this ain’t much juice, and my multimeter has seen some rough times. I got 80-90 ma on the reader and relay, and 145 ma on just the charger. I don’t really trust those numbers, and I wanna double check with another meter.

I was also thinking about using a diode to prevent charger drain when not powered. Then I realized I’d lose .7 volts passing through it. My 12.6 volt charger would effectively become 11.9 preventing full charge. I’d have to find something closer to 13.3 volts and let that pass through the diode to become 12.6

not random, Good!
Agreed, Diode in plus bigger Charger.

Do you have a BMS? If not you can pick them up for quite cheap.
I would send you a link, but will wait until you decide on your battery config.

Alternatively a micro switch
or reed switch
or a contact switch between lid and box.

The momentary I was thinking of which would allow adjustment 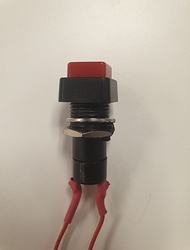 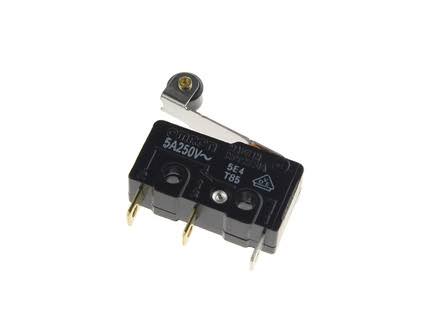 Do you have a BMS?

Yep. I even got a spare.

I could, sketch / draft / mock up an example.

No need dude, you’re coming in loud and clear. It probably helps that we’re both thinking the same thing on the switch.

Trying to get a baseline for just the rig. I re-attached the battery (fully charged), but left the charger unhooked, and I’ll see how many days till it’s dead. If I get a decent result, I might just upsize the battery and be done.

Looks like up time is right around 7 days without the charger.

There’s no room at all under the drawer. Don’t know what I was thinking. No battery space at all.

I do have another, just acquired, drill battery that has 10 cells. I need to see if it’ll fit the case I’m in now, but I’m thinking 3S3P which should give me right at 3 weeks runtime. Charge it twice a month with room to spare!

Diode and charger have been ordered. Think I’m gonna start over instead of ripping my existing work apart. I can reuse the existing setup on something else. To that end, I found an identical locking box on Amazon, and it came in. LOCKED WITH NO KEY.

Fortuneatly, it was easily picked. And I wanted to change locks anyway.

Will probably get after it this weekend. For now, I’m fighting a friggin head cold, UGGHHHH!!!

IMHO 7 days is a lot of time… but I think you might want to try this… use a diode and a DPDT relay with the mains supplied power… then on the other side of that relay and diode use a mechanical switch if the mains goes down, then the battery is disconnected but available through the mechanical switch. That way your battery stays charging when mains is available but if mains goes down the battery is only engaged to power the system when the mechanical switch is engaged. You could also use a simple low power PIR motion sensor to switch a transistor to engage the battery with the reader… that way it powers up as you approach it, but if nobody is in the garage for 25 days then nothing happens and the battery is only powering the PIR sensor… lots of ways to extend battery life without tossing more cells at it.

use a diode and a DPDT relay with the mains supplied power… then on the other side of that relay and diode use a mechanical switch if the mains goes down, then the battery is disconnected

That is a beautiful idea. Simple and elegant. I like it alot.

But… It’s really geared more towards a battery backup situation. Which is probably my fault, I’ve not been specific as to how I’m planning to use this. I’m a machinist by trade, but not working as one currently. Should I go back to that kind of work, I’d need routine access, but probably only be able to plug in to AC intermittently and for a short period of time. On battery would be the norm, plugging in would just be to top off the charge every now and then.

IMHO 7 days is a lot of time

Agreed, It was kind of my minimum time frame when I started this. But I’ve got the cells, I’d like to redo the box to clean up some of my work / choices anyway, and really, why not grab a little more if I can?

I go back and forth on this. I want to hoard every last milliamp, so I should power it down, AND I want to avoid even the simplest of additional mechanisms, so I won’t power down. I guess that second one is mostly KISS principle, which got left in the dust a long long time ago.

Maybe in version 3.0, it’s unlikely I can perfect this enough to convine me to leave it alone.

Mate, relook at the momentary switch! on whatever form factor that suits you!!!

Amal made some great suggestions, and would work well in a fixed position or a low foot traffic area.

There are many ways to skin a cat, find momentary switch that works ergonomically on your box and install it.
fast installation, simple modification to wiring and effective REALLY effective.

That’s what I have done and would do in your shoes.
PLUS, I would add a 9V battery Jumper incase of lock out. (9V will operate xEM but not sure if it would operate you locking mechanism, but you could still use the 9V lead to a 12V supply, infact as I type and think, you could use this as your charging plug OR better yet… still typing and thinking, use your current charging socket and make a 9V battery adapter (if it operates your lock), Hot glue a magnet onto a 9V battery and stash it on your toolbox…)
I’ll shut up Now…

Good Lord, don’t do that!

The initial design choice was to keep the key (manual) fully functional. Just in case.

I’ve only been here for a few days, but these forums wouldn’t be the same without your ramblings

The initial design choice was to keep the key (manual) fully functional. Just in case.

these forums wouldn’t be the same without your ramblings

I wanna re-do the magic tool box for extended life between charges.

You KNOW what I am going to say, BUT what is your plan

More batteries, diode on the charging circuit, up the charging voltage to compensaste for diode, and just generally clean up the build. It’s the little things that I could’ve done better in hindsight.

I think I’ll keep the entire original though and mount it on my shed door.
Gonna need a solenoid that’s compatible though.

I’m working on a similar project as far as an RFID controlled lock for my rolling tool cart, I’m using a cheap RFID cabinet lock and extending the antenna to outside the box(the box is all metal) I’ve already been able to program it to read my xEM and everything is working out so far. 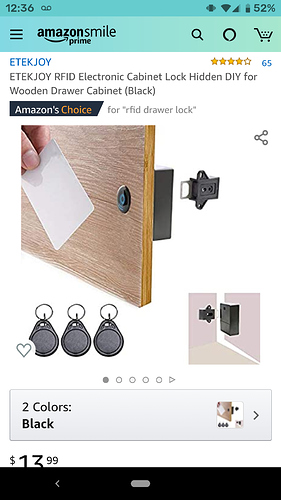 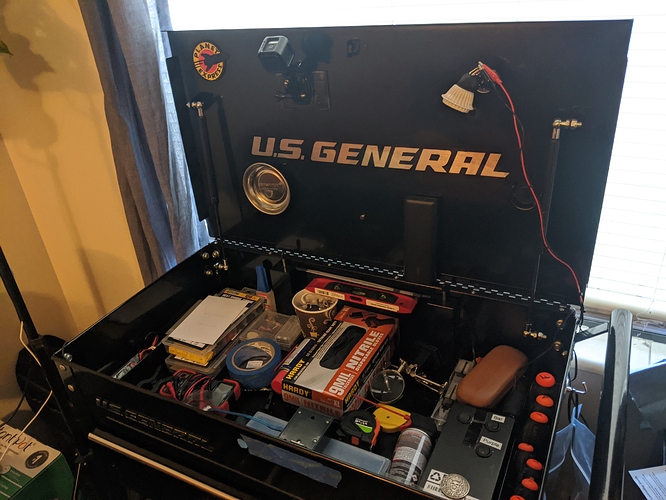 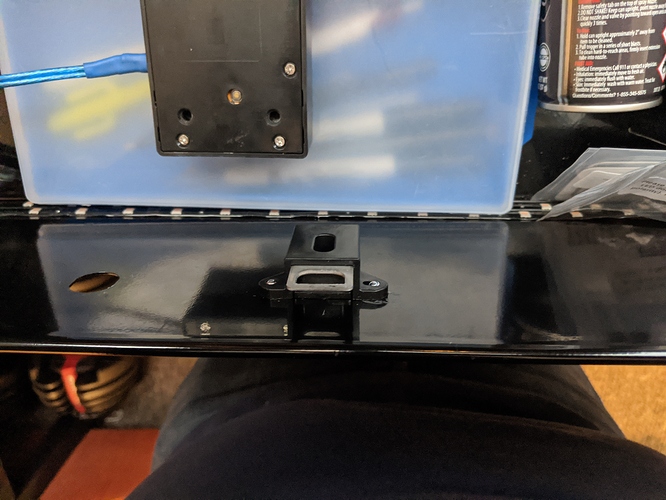 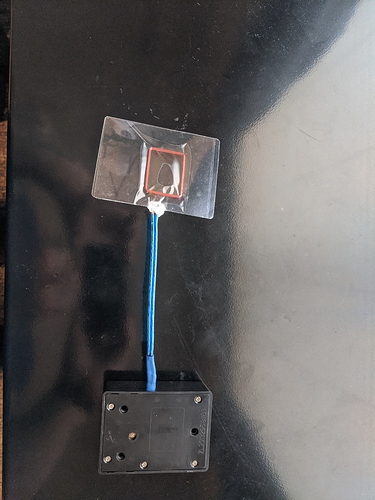