I had my xNT implanted exactly a week ago by a professional piercer linked from dangerous things. Sadly I am unsure about the placement and installation depth.

The piercer didn’t take a skin fold to pierce into but rather shoved the needle into my hand.

I took a photo showing where the chip sits in black, green marks where i guess i‘d rather have it.
You can also faintly see the injection mark healing.

The toothpick method won’t work for me as i can hardly feel it while poking around.

What is my best call of action? Have it removed? By whom? As it sits rather deeply i figure I’d probably need surgery to get rid of it.

What are your experiences? Will it float up and encapsulate and will it probably be fine? 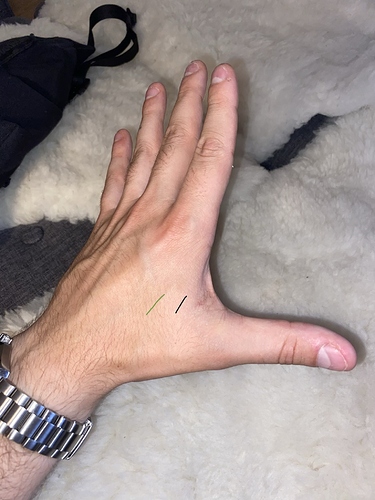 it can be scanned and written to rather easily

That’s a good sign it is not too deep ( i.e. not likely in the muscle )

What is my best call of action?

Is there any pain?
There doesn’t appear to be any infection.
At this stage, If I were you, I would just leave it

Will it float up and encapsulate

By float up, do you mean, toward the surface, or do you mean toward your preferred green line location?
Until it is encapsulated by your body you may get some movement, and will likely find a natural “hollow” to call its home. Give it some more time to see where it settles.

Where it is, and where you want it to be, it looks like there is enough space to install an xEM or LED ( HF or LF ) there, you won’t want another HF chip implant there though, as it may cause interference.

will it probably be fine?

In my opinion, it looks perfectly fine.

Don’t judge the position, by the colour of the line
#BlackLinesMatter

To be honest, if it’s not causing any pain and it is able to be read and written to - I’m not sure why you’d think about removing it?

It sounds like you’re in pretty good shape! It’s implanted, working, and not causing any problems! Congrats!

Unfortunately, this isn’t always an exact science. Chips can move a bit, piercers have varying amounts of experience (if any), and it isn’t a procedure handled by medical professionals for a medical outcome.

The bright side is that there is a LOT of wiggle room and exacting outcomes aren’t necessary. Taking it out probably wouldn’t be difficult, but I’d take my time before jumping to that kind of action.

If it moves, it’s in the fascia layer. So depth is good - as confirmed by the fact that it scans well.

Placement… well, that’ll shift. It’s unlikely to stay where it was implanted, as it’ll probably want to settle at some low point nearby.

Will it float up and encapsulate and will it probably be fine?

It won’t encapsulate - DT chips are not coated. Or maybe it will a bit, depending on how your body reacts to the foreign object. My experience is, it’ll just settle where it wants and stay there purely mechanically.

I reckon it’s just fine. Don’t sweat it too much.

I’m of the opinion they tend to go where they want to, then, and only then, will they settle down.

Least that’s what mine did. It was stabil for awhile, then just took a little journey and stopped not to far from it’s original placement.

My experience is, it’ll just settle where it wants and stay there purely mechanically.

I wish mine did that. They stay where I put them in me. I cannot seem to get my NExT to move under my skin.

Okay that all sounds soothing and calms me.

I am still not sure if it’s in the fascia or under the skin, laying on top of muscles.
Amal said in other threads (i can’t seem to find them right now) that this kind of installation can be problematic somehow. I don’t know if i actually feel it against my muscles or if i just imagine that feeling, paying too much attention to my hand.

But yes, as it performs well for my needs and does not cause pain, i will wait for now and update this thread if i should develop problems from it.

If you’re still unsure or anxious, hear this line of reasoning: