Nevada just made a bad bill even worse, by explicitly restricting people from getting voluntary implants. Before, they just suggested it.

Both people involved would get charged with a felony and face up to 5 years in prison/$10k fine.

OMG next will be a ban on tattoos lol

You don’t own your body. Weird for the state with the city of sin to do this

OMG, reading the comments on there is crazy… First, half the people commenting didn’t even read the bill and put their “for/against” vote in incorrectly.

Then there are the “tin foil hatters” spewing garbage about tracking

And there is far more crazy in the opinions than not

It’s not “next”, this bill literally does ban tattoos. It says “prohibiting any person from requiring or authorizing another person to undergoimplantation of a microchip or other permanent identification marker”.

Any tattoo is pretty well defined by “permanent identification marker.”

What’s interesting is the first amended draft out of committee specifically said tattoos were not considered in the bill. Then the second draft went and changed pretty much everything in the amendment

I share the concern that this is a blatant attack on bodily autonomy. I would like to point out that the current version of AB226 (Amendment 46) seems to exclude tattoos. It says:

"(b) the term does not include a device that is subcutaneously implanted in a person, if the device:
(1) is incapable of passively or actively transmitting personal information to another device using radio frequency technology and the device:
(I) is used for the purpose of self expression 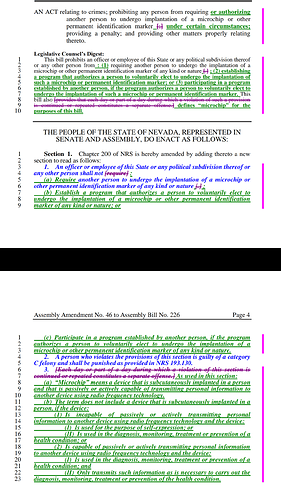 That seems like a pretty direct exclusion for tattoos and silicone sub-dermal implants. There’s a robust tattoo industry in Nevada. If they tried to ban tattoos, it would almost certainly be taken to court. No one with an economic incentive is around to defend biohackers, though.

Its going to be a huge hurdle to overcome the stigma and negative public perception associated with chip implants. I will sometimes show & explain my implants (xNT, XEM, xBT) to corporate & tech people in the healthcare industry and 80% of them look at me like I’m a lunatic. Theres so much misunderstanding and negative perceptions that need to be corrected. Even most of my tech colleagues who show interest in the devices can’t get past the needle/ injection part. I’m a former heroin addict so needles are kind of a sick interest to me lol. Regardless I don’t see a bill like that ever passing in major Blue states. This Nevada bill reeks of fundamentalist Cristian ultra conservative politics. Sorry if that offends anyone here.

Just to update everyone. I, along with Anastasia Synn and Gennady Stolyarov, went to the Nevada legislature yesterday to answer questions and follow up on the bill’s progress. As it stands right now, voluntary implants are safe! There will be no restriction on voluntarily giving or receiving an implant in Nevada. You can see the document here: