Just about to get a NExT installed and I plan on using the NFC side of it to pass on my contact details / pull up a virtual business card.

I’d like the information to show my name, contact details and a link to my website (and perhaps a picture of my face). My understanding is that I can use the NFC Tools app to program it with my contact information, but I’d prefer something a little more visually appealing.

When it comes to virtual business cards, what are my options here? Any advice would be greatly appreciated.

One option would be to have it open a link to your business’s website, or possibly having it link to an image of your physical business card. They would, however, just be links, so it may not be as professional as something like the contact feature in the NFC Tools app.

You could create and host your own website, with links to your social media accounts, information about you, a PDF with your resume, … and program the URL into the NExT.

For the moment my NExT points to my LinkedIn profile but I will surely point it later to a custom website.

If you use an app like TagWriter by NXP (chip manufacturer) you can write more complex “records” to your tag. Here’s a rundown of adding a “Business card” record

That’s the tl;dr best solution I can see in your situation. If you want a better result, there’s two problems you’ll encounter in your quest:

So really I think the best way is for you to just include the link to your website as a second email in your contact info. That way the recipient will have it stored, even if it doesn’t open immediately.

I’ve found NFC Tools Pro (paid) to be better than Tag Writer. NFC tools has a better UI and lots of options to load and save profiles.

I have found that if you put a phone number mime type as the first record, then add other records after, Android shows all the records and allows you to choose which one you want. If you put any other record type first, it just does that one thing automatically. You may play around with that idea. There are some caveats, I just don’t remember them in enough detail to explain here.

Thanks everyone! I’ll try out all the various options suggested and make a video of my preferred method. Hopefully that can help anyone else interested in the process.

So if you were to put a blank phone number or your actual phone number first it would cause it to give people the choice of what to open even if you had multiple different options after that? That seems really useful, and may be worth drawing more peoples attention to.

Having a link open AND some contact info is more complicated. You would need to create a “message” with multiple “records” contained within it (1 record for website link and 1 for contact). […] The problem is that most phones will only perform an action on the first record in the message, and the other record is invisible unless you have an app like NFC Tools, and even then it’s challenging

I’ve played around with this quite a bit, and actually it’s worse than that: older versions of Android refuse to do anything if they find more than one NDEF record.

So if you want your “business card” to be compatible with as many stock cellphones as possible - i.e. not requiring a guy with an older cellphone you give your business card to to install NFC Tools, which kind of defeats the purpose - then the only option is have a single NDEF record containing a link to your website that the phone will automatically open.

There might be another option to stay compatible with older phones: it might be possible to have a single NDEF message containing a single NDEF record with a link, followed by another NDEF message containing multiple NDEF records for the additional data. Perhaps older phones stop at the first message, and therefore will accept the single record and open the link - ignoring the second message/records with the additional data - and newer versions of Android handle both messages gracefully. In that case, it might be possible to maintain some level of compatibility with older phones, while newer phone owners would be able to get the additional data also.

But I haven’t tried it yet: as far as I know, most (all?) NFC writing tools only create NDEF records in a single NDEF message. I’ll have to code something to create a multiple message payload to write on a test card, and I haven’t found time to do it yet.

Try putting multiple ndef records but make the first one a phone number and tell me what you get with old and new phones. 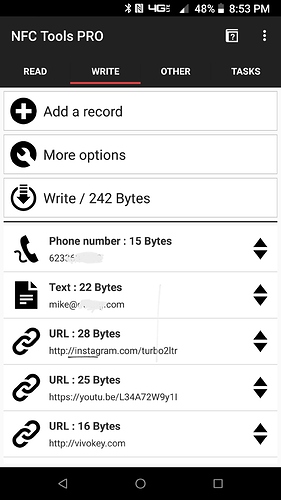