Judging by the previous comments in this thread Keeping the cost down is a priority, So Micro USB is gonna be my vote.

Speaking of cost cutting, I was thinking it could be powered by a usb power bank supplied by the consumer, They’re readily available, Rechargeable, Reliable,
Pretty sure most people already have one, I think they put out a 3.7 volts then are converted to
5 volts so it might be a viable Avenue to take.

Speaking of power…
What if the power supply fails
Will there be an alternative way in Like a mechanical key override
Or a way to temporarily power
It like most other brands offer
As a Hobbyist lock picker if they choose to use a mechanical key
For emergency override it will greatly reduce the security of the lock, Unless they put a high security lock cylinder in it, Welp,
There goes the cost efficiency.

Samsungs locks have a heat sensor so the door unlocks
automatically in the event of a fire.

Do they? Interesting. I wonder if this sensor could be fooled in some other way to unlock the door…

What’s the legality of copying Samsungs firmware cause alot of the locks tricks are going to be software related and it would save time and money to just modify a version of their firmware.

Illegal… and also decompiling their firmware to a state that is easily manipulable as source code is very difficult, first to get the binary from the chip, and then to create legible source code from it… but ultimately it’s vastly different from reverse engineering functionality and creating something similar.

In order to program and update the locks firmware or just to service it, it’s going to need a Port of some sort.

JTAG pins are sufficient and provide far less of an attack surface since they would be inside the case and not externally accessible. Ultimately re-programming would be a rare event anyway, so there really is no need for a readily accessible and comparatively expensive port on the outside.

Speaking of cost cutting, I was thinking it could be powered by a usb power bank supplied by the consumer, They’re readily available, Rechargeable, Reliable,
Pretty sure most people already have one, I think they put out a 3.7 volts then are converted to
5 volts so it might be a viable Avenue to take.

Ok, but imagine what this will look like in the real world… a nice clean lock design, then a crappy velcro’d on rando USB power pack hanging off to one side… 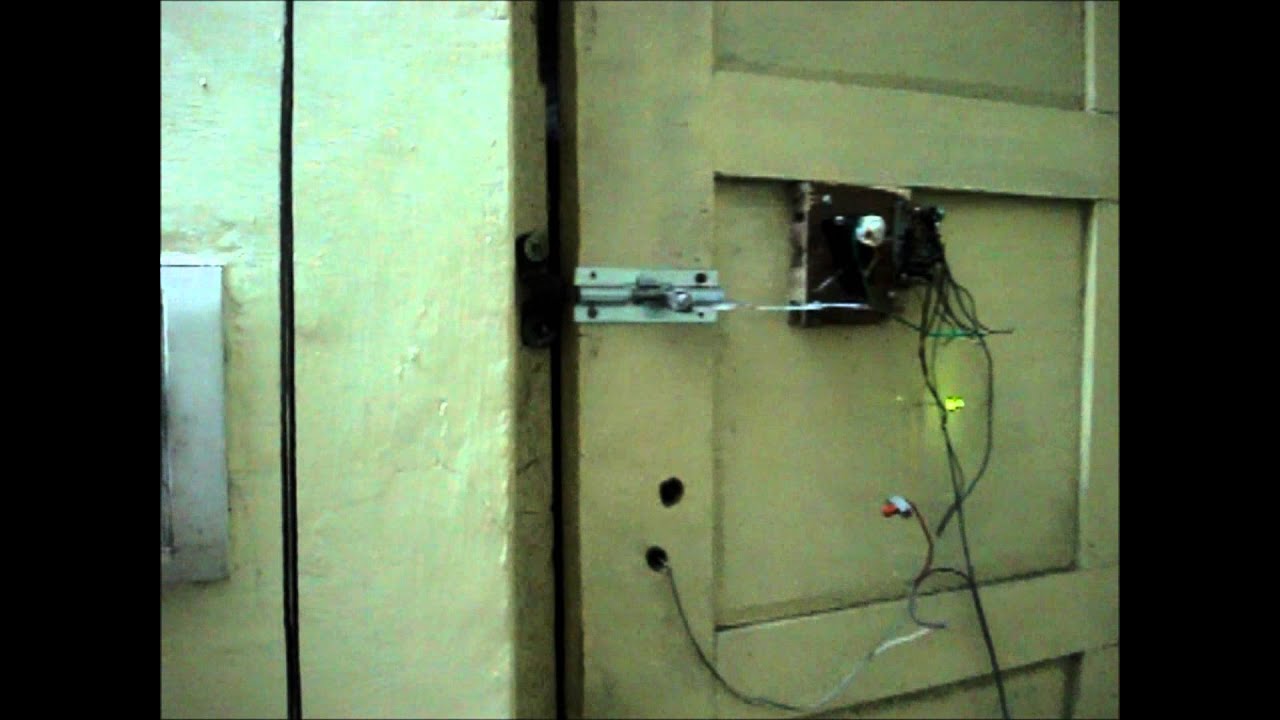 As stated above, if you want rechargeable the board can be engineered to accept alkaline and other rechargable AA chemistries.

I have a lot of electronic locks and devices… the only “failure” I’ve ever seen of a power supply for these low voltage DC devices has been that it runs out of power, and if this is a lock that is in relatively consistent use, there are plenty of ways to warn of a low power / battery replacement situation well in advance of an actual total power failure. If anyone here can offer an actual scenario of a battery powered low voltage device that was in regular use have a “power supply failure” other than the batteries going dead, and which was not the result of some other kind of internal failure, I’m all ears.

As you stated it’s bulky and expensive to add a decent lock cylinder and ultimately it’s not something I think is important. For years and years I’ve used both an NFC padlock which has no cylinder, and multiple electronic door locks which do but I’ve never used in all the years I’ve owned them… I don’t see the need for traditional keys and lock cylinders, especially since A) we’re going for a keyless lifestyle, and B) if a person doesn’t carry keys regularly (like me), it’s likely that the keys themselves will be locked away somewhere and ultimately useless in that emergency access scenario, and will probably all go missing eventually… mine have.

They are cowards, pandering to unsubstantiated consumer fears. I have never actually used the external power taps on any of my door locks, and I have never heard of anyone else doing it either. We are not cowards.

@amal
Yeah, I was thinking the same about the heat sensor, Just torch it from the outside and your in.

Lol, Gotcha definite no on the power bank.
In all fairness though that picture was a little exaggerated.
It would look a little cleaner then that.
Was that the prototype, jk, jk
Don’t ban me

What is your target market,
Mainstream consumers, Hackers, both?
I’m assuming both.

You made alot of extremely good points, Thank you for clearing that up.

Can’t wait for the apex line to launch.
Sad to hear the flex one/beta is dead.
I almost shelled out the money for one last December, My only deal breaker was that scalpel installation procedure, I do all my own installs and extractions, But for some reason that lifting of the skin thing, I can’t, I just cant.

Thank you for pioneering all this
Fun stuff.

I was thinking the same about the heat sensor, Just torch it from the outside and your in.

or you could just chainsaw your way through the wall, then walk over and press the unlock button from inside… THEN YOU’RE IN !!!

In all fairness though that picture was a little exaggerated.

Honestly though, making a little battery compartment in the plastic case for 4 AA batteries is a no brainer.

My only deal breaker was that scalpel installation procedure

The Apex Flex will be the same form factor as the Flex One was, but fear not friend… we now have a needle procedure for flex installations and custom needles made just for it. Use the needle to incise and pocket in one insertion, then remove the needle and slide the flex device in… butterfly bandage to close… simple.

Woohoo, Yes yes yes yeeeeeeesssssssss!
I was thinking that’s the way you would go, Can’t wait to see that needle… Until I see it

Can’t wait to see that needle… 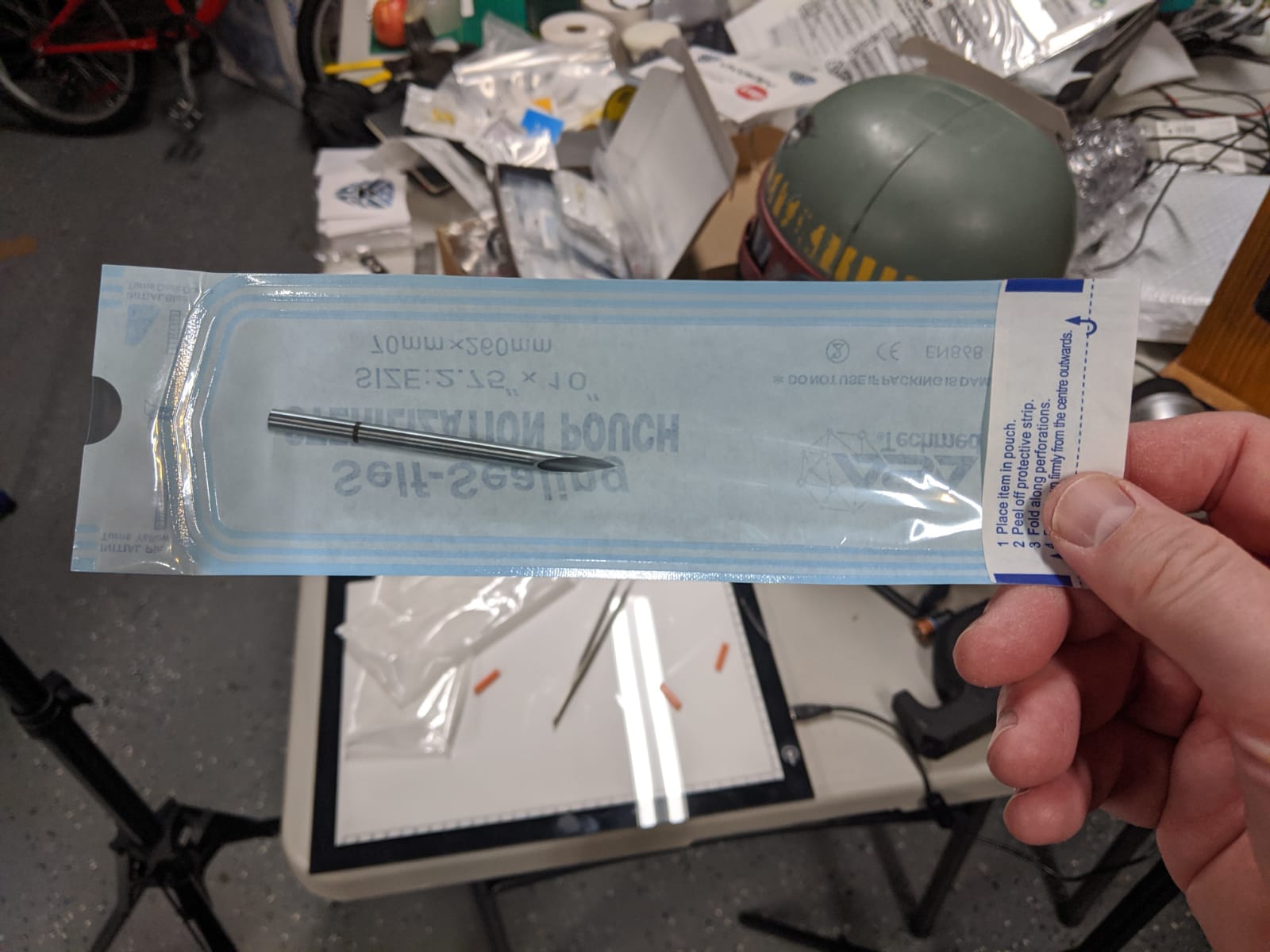 5 Likes
What do you wish you had known before your first implant?
Technique for installing flex implant with needle
Cyborg in the making with questions
anon67519447 February 3, 2020, 10:37pm #133

@amal
Your rock, Everything looks good,
Not that scary

That’s child’s play @amal, being able to pocket with that is gonna make things way simpler then scalpels and dermal separators! So excited

being able to pocket with that is gonna make things way simpler then scalpels and dermal separators!

Just in case it was missed in the post above…

@amal
I didn’t miss it, as a matter of fact I screenshoted it just in case it was pulled. It’s like waving a steak in my face.

Baaah that needle is no big dea…oh we have to manually insert the chip afterwards…oooh boy.

Hollow tube with a sharpened bevel

, Well, that depends on your perspective, and of course it is subjective but it is at least a couple of mm

larger than an xSeries

, So with the prospect of stabbing that into your flesh, it sounds like some people on here find it a little more intimidating

.
The other enhancement/ Point of difference is the laser marked depth gauge.
I love a great well thought

Seeing it’s been 11 days, just wondering if there has been any progress or updates

Love this idea. Going to add to the voices in favour of modding an existing design. If specific hardware limitations crop up in future that would be a good time to pour energy into custom hardware design. The deadbolt internals seem somewhat standard which is to our advantage, but fully custom design takes control out of third party hands.

The deadbolt internals seem somewhat standard which is to our advantage, but fully custom design takes control out of third party hands.

Actually this is the crux of the issue… they are not standard. The only part that is standard is a part we’re already talking about using an off the shelf part for, and that’s the bolt itself. The entire rest of the mechanical design is just as custom as the electronics. No two Samsung Ezon models have the same mechanical design such that a replacement open source PCB could simply be fit to it should the model ever change or be discontinued. On the other hand, the mechanical design is, for the most part, simple. The hurdle in my mind is getting that design actually made… stamped out in quantity, with the required quality, at a practical cost.

I can say that I did take the route of talking to lock makers about buying mechanics or making a special run of locks and it never got anywhere. Possibly one outfit that makes EU cylinder locks might be interested, and we’d jump on that if it were a go - but for this standard US deadbolt style lock, none of the players I talked to were even remotely interested.

This is a huge thread. Has anyone talked about using an atmega chip controlling a stepper motor to physically actuate locking lug? Its seems like a simple way of doing it. Then whenever you put a tag up to the door it knows its position and goes the opposite direction for x amount of steps to either lock or unlock the door. You could remove the inside door handle and 3d print a case for the motor and electronics and just add a metal disc to screw it to the external knob and run the reader to the outside of the door. I’m going to try making the basic design and circuits for this next weekend.