Paying with an implant

I know it’s possible I just wanted to ask the best way of doing it. I was thinking the 2 in one implant kit that I forgot the name of but I need to make sure that’s the right thing and also ask how I would go about copying my card details to the chip to pay with contact less using it. Thank u

Hello and welcome to the forum, we are here to help!

Choosing to put something in your body you should understand what it is and how it works! To that end please read on.

NO payment is not supported by any implant yet!

Quick tip for you; when you start typing a post title befor posting it will give you suggestions of topics that may be similar

yeah. I am getting different info every time I look into it. I’m told its possible at first and then its not and so on. I know it is possible and I know its a bit sketch to do it considering copying card details is pretty much illegal but I don’t really care, I just want to know about how I can confirm that it would work.

You cannot pay with an implant!

Thats the only message we give people, it may be coming in the future but is not possible right now.

Like @Devilclarke said, nothing off the shelf is available…yet.

The only current option you have from a reputable company is 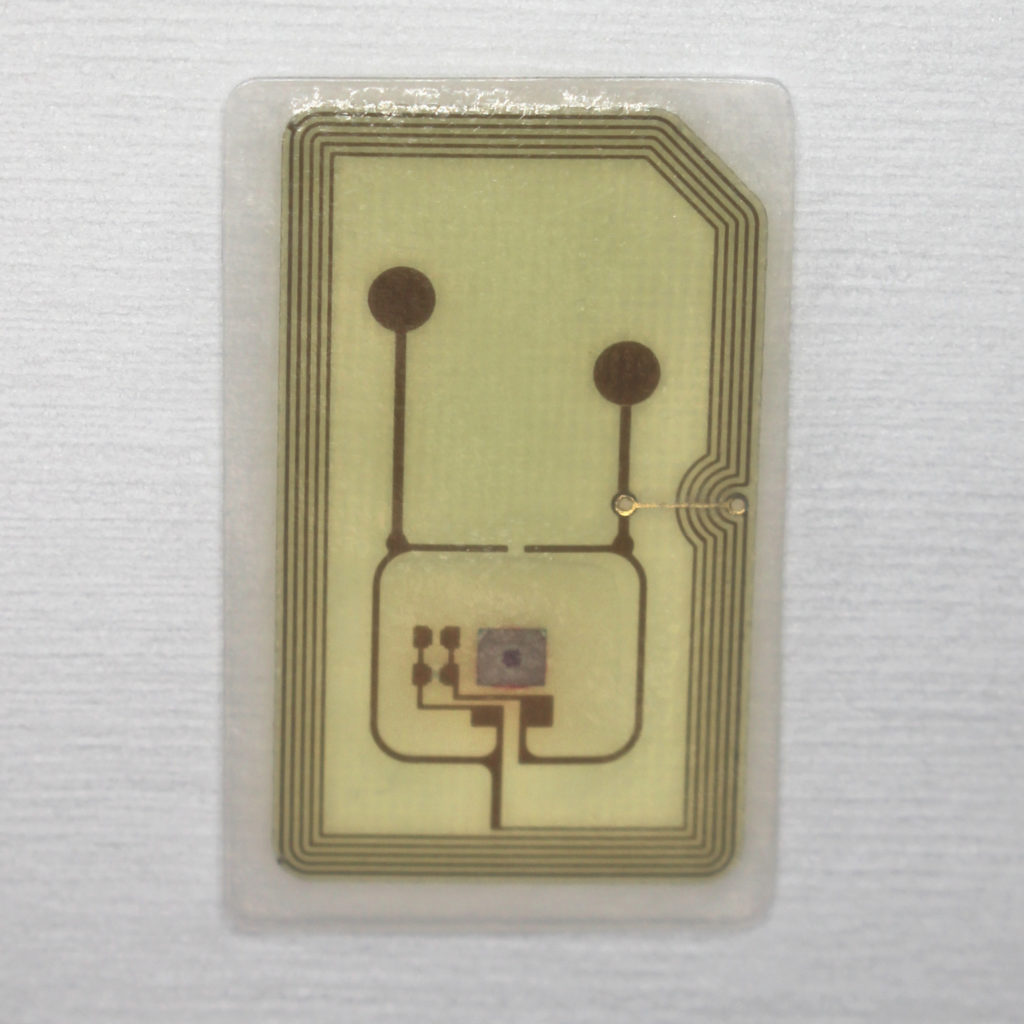 But you have to have access to a micro bank card

I am getting different info every time I look into it. I’m told its possible at first and then its not and so on.

Yeah, the press loves to sensationalise for headlines. Everyone wants payments, it gets clicks.

The legality isn’t the issue, the cryptographic security is. This isn’t possible with currently released implants, they aren’t certified and won’t process a payment on any readers that are on the market today. That may change soon, but nothing off the shelf will work.

DT have a conversion service for if you send them a micro card issued by a bank, they will convert it to be an implant that is bio safe if they can. This is the only working way to implant a payment card at the moment. It is custom, it has an expiration date and it can be revoked/cancelled by your bank at any point.

You can not copy the data from your card onto any implant, there is not a compatible implant that will work with this technology. It’s currently cryptographically impossible.

This is definitely not about legal reasons.
Copying credit cards is impossible because of technical reasons.
EMV transactions are cryptographically secured and it’s just not possible to extract the private key from the card.
It could be bruteforced in theory, but would require billions of years and tries. And oops, the card will self-destroy after 65535 attempts. So yeah, not possible.

Speaking of payment implants, I noticed the FlexPAY1 on Digiwell’s website the other day. This is clearly a microcard for the German and Austrian market, that’s coated to make it implantable. But I was surprised to see the “Flex” naming scheme used by Digiwell, and even more surprised not to find it as an available product on the main DT page, if that’s supposed to be an official product - albeit limited to a couple of countries.

Amal, is the FlexPAY1 a product made to order by DT, or blatant trademark piracy from Digiwell? 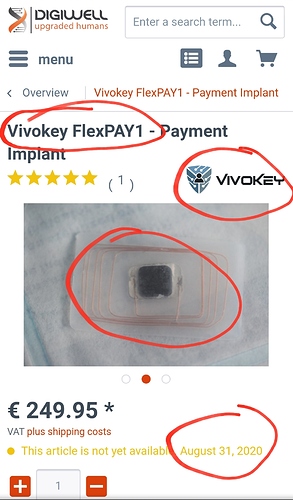 Yeah that looks a tad suspicious, when you look at questions it says there “valid for 5 years” sounds just like a conversion as well as one of the pics its definitely an micro card conversion.

Wierd there using the vivokey name maybe its just a crossed wires.

Isn’t it funny how defensive / protective we all get over DT, really shows we care and that DT care to. 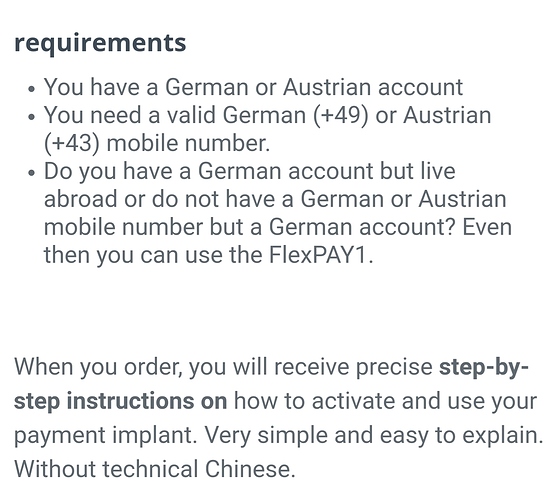 Just a guess from reading that page! It seems like basically a group buy of converted micro cards when they get enough orders. Like, you sign up for a prepaid bank account, the micro card gets sent to DT/VivoKey, it comes back, they give you instructions to link to your account?

The converted cards have been called VivoKey Special Project by a few people before, I’m guessing this being listed as VivoKey isnt surprising?

EDIT: @amal did also hint in the payments survey at the idea of a VivoKey Prepaid Card as an option if existing banks don’t want to cooperate - maybe this is an early version of that idea for people who don’t want to wait for Apex?

That would be cool but at the same time limiting to Austria and Germany REALLY restricts your market.

limiting to Austria and Germany REALLY restricts your market.

Or an alternative way to look at it, launching in 2 markets REALLY increased the number of potential customers over the 0 markets that they are in now

Could be just thats where the first banking providers willing to partner with them are located? Could be any number of things!

I was literally told to ask here by someone from dangerous things for more details about payment and that person who I was talking to also hinted at copying card IDs to be used for payments. I may be new here that doesn’t mean i’m clueless. I got my first implant when I turned 18 so its not like I’m looking into this stuff for the first time, I have done a lot of research to get to the conclusion that payment is possible and I’ve seen it been done before.

someone from dangerous things

Do you remember who it was?

hinted at copying card IDs to be used for payments

was it verbal or written?
Could you copy and paste exactly what they hinted at?

I got my first implant when I turned 18

Cool, what did you get?

conclusion that payment is possible and I’ve seen it been done before.

Anymore details? Did you ask them what they were using?
Could it have been a custom payment option?

im only going to answer 1 of your questions because I see no reason to sell you anything else. I have seen someone pay with I think apple pay and the other was just a usual contactless card reader

With current off the shelf implants it is not! You can not clone a card to an implant they require a built in private key that has to be put there by the manufacturer.

There used to be a man in the middle attack that would work kind off but that as far as I’m aware has been debunked / fixed atleast a year ago.

As for payment with say a type of wallet maybe but NOONE on here has ever mentioned it or claimed to have successfully dont it.

Your stating someone told you can you tell us who, how what or when

Sorry but your coming off as someone who doesn’t like the information they are getting and is adamant we are lying, why would we lie?

You saw that video online with the guy at the shop is it buzzfeed didn’t you!


Or do you mean this guy wearing merch??

if it was the latter then looking through the comments you can see that he’s got one of these!

im not saying you’re lying im saying you’re all wrong. I can’t say why you’re wrong because im not in your situation bit I believe you’ve just been misinformed about what is truly capable. I thought I was asking people who knew most everything about implants by asking here but clearly not. I could find better information just by doing more research elsewhere since it seems to be yielding better results and much less aggression toward the subject. But I guess thank you for the little information you’ve given me so far being simply that it isn’t possible without any in-depth explanation. Let me ask you all this. HOW do you think people steal card details to then reproduce that card on an off the shelf blank card? explain that to me while also saying its not possible.

Just use venmo… (only works in US and I believe you have to change the code evey payment) so not exactly a proper solution but hey if thats really what you want to hear crack on, magor far to do for every payment though.

I genuily give up, maybe we should say in a safe way then its not possible to clone your card to an implant.