Anyone with a Note 10+ have any case recommendations that don’t block NFC. Right now I have the Spigen Neo hybrid case.

Yeah. When I use the tester it’s very finicky even without the case on. Compared to my one +7 which lights up with the tester on a much more spacious area.

Hopefully is is a software problem on the Note10 - hope so.

I think it’s probably a hardware issue, unfortunately. Here is a diagram of the Note 10: 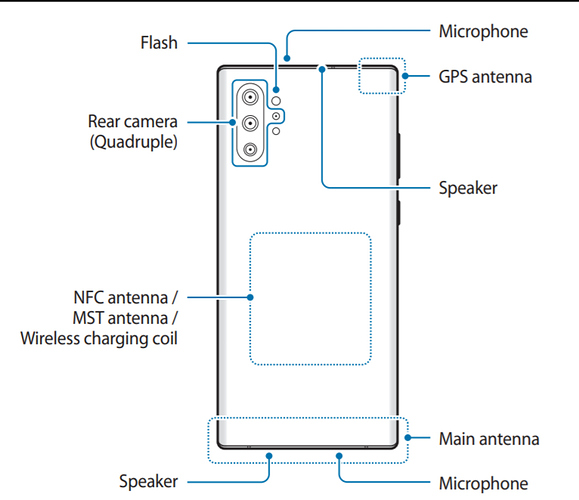 Screenshot_20191020-101622~2.jpg1440×1243 187 KB
The NFC antenna is large and flat, which doesn’t couple well with implants. It’s also packed in there with a wireless charging antenna and an MST antenna (which I didn’t even know about, but is friggan cool). Here is a shot of the internals: 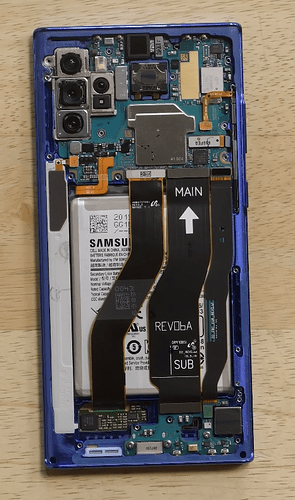 Screenshot_20191020-100004~2.png466×789 489 KB
I don’t see the NFC antenna in there. It must be under the sticker on the battery pack. With those ribbon cables and the backplate, the antenna could be a good 3mm from the surface, with a less than ideal shape, a big hunk of metal battery right behind it, and some other antennas nearby introducing parasitic elements.

I’ve found that phones with the antenna up top near the camera (and away from the battery) perform much better. Luckily more phone manufacturers are doing that with the increasing prevalence of mobile payments. I feel like NFC is only an afterthought on Samsung devices. They’re pushing the envelope in so many other areas, maybe they’re just trying not to spread themselves too thin on R&D.

That’s interesting. They really crammed a lot in there. I guess it’s a lot of work for it push through the battery > back cover > case. Even with the case off the tester just flashes dimly. You’d think they’d test that stuff better being such a high end phone.

I mean, it works great for their intended use case (payment terminals). They don’t really care about our weird out-of-spec passive NFC tags. There’s like a few thousand of us. They sold more than 1 million note 10s in the first 30 days. We just have to live with it.

It doesn’t work for touch to pay here with my case on the phone.

The clear Otterbox case works fine with implants on the Galaxy Note 10+. No issues with other devices either. Doesn’t mean it will be the same for everyone though depending on their unique situations.
The Note 10+ has been working very well for me. First phone that wasn’t fussy when working with different items.
Here’s the link although I think it’s cheaper elsewhere.
Otterbox Clear Note 10+ 5G

I got the note 10 plus and have had zero issues getting it to read/write to my implants. With a clear case on it either.

The clear backed Granite case that I purchased with my S8+ has never blocked a NeXT read or write.

On my Huawei P30 I absolutely can not read my NExT implant with the plastic & rubber case, but it reads my spark 1 without any problems🤷‍♂️xP

I used to have s10+ with Otter Defender case. Lately, I have upgraded to s20 Ultra with Otter Defender.
These cases are rated for “touchless pay”. However, I had and still have real tough time getting the phones to sense my implanted xDF EV2. Don’t have problem reading cards. Otter makes fantastic cases. HOWEVER, definitely not good for implanted chips.

I have a Note 8 and a Note 5 that I use for my Android Dev efforts. I use UAG cases for those. While they are not as ruggedized as the Otters are they work fantastic for implant chips and cards.

I have a Note 9 with an Otterbox Defender, so not a lightweight case. It still reads and writes just fine. That sucks that the next models up are worse in that regard.

Post is Jan 2020, someone restricted it to try and sell shit. Wouldnt bother commenting

Has anyone been having issues with Samsung Note 10+ in the Otterbox Defender Case?

My x-series chips are scanning fine but surprisingly I have issues with my flex chip scanning on this phone only. It could be due to swelling but it is scanning fine on my Pixel 6 using the same style of case.

I used to use an otterbox defender, I could fully illuminate my Xsiid… but it wouldn’t read