it’s pretty terrible… you might (might) get results if you can remove the tuning caps from your proxmark3 board… the rdv4 modularizes the antennas by putting tuning caps on the antenna module not the main board… but of course you could just ruin your pm3 by doing this… soo… careful?

Well, I just tried programming my NExT using the stock antenna on my PM3 Easy while it’s still in it’s applicator which is still in the pouch labelled “do not open this much until…” and it seemed to work, so I took the whole pouch and was able to open a door in my building with it, so I guess I’m ready to have it implanted.

How the hell??? I can BARELY read my implanted NExT with stock PM3 Easy antenna after hundred of tries pushing my hand hard into antenna, tho it reads perfectly using all my door readers. I even used blue cloner to program the lf-part finally because it was impossible pm3 (I know about blue cloner perils and I know how to unpassword T5577 after it).

There was definitely a sweet spot on the circular antenna of the PM3E that I determined using the LF XFD. Since I’ve purchased the LF antenna from DT, I’ll probably still buy the PM3 RDV4.01 for changing the programming as I’m sure it won’t work once it’s under my skin. I was afraid that I had bricked it at first, because after I issued the lf hid clone , it became harder to lf search for, but would appear. I then went and tried it out on one of my building’s HID readers and the door opened. I’ve got an appointment on Monday to have it installed. I purchased two NExT chips, I haven’t decided if I’ll have them both done on the same day or if I want to have one non-injured hand available.

Do you have the LF XFD @koteeq? If so, use it to determine the sweet spot to couple with the stock PM3E antenna.

Yep, I had that field detector included into my NExT kit but I even forgot to try it with pm3.

I’m sure it will work much better when implanted for you because your skin is nothing compared to metal syringe that blocks signal + sterile pouch + plastic pouch + long distance.

Just admit that your stock antenna is magical.
I’m really happy for you

Good luck with implanting your NExT!

I haven’t decided if I’ll have them both done on the same day or if I want to have one non-injured hand available.

Your decision of course, But for me I’m got one in each hand in the same session, logistically easier, same setup ( implant station ) my mate who installed them “practised” on the first one and it was easier for him on the second one, It was just faster and easier all around, It also meant faster healing time ( both healing at the same time ).
I don’t know if I was just lucky, but I had the plasters off in about 2-3 hours, I had no swelling, I just kept usual hygiene practices and was fully healed 3-5 days.
I just changed my activities for the single healing time rather than a dragged out recovery.
I stopped swimming,boxing and using the gym and just ran over that period.
Suffice it to say, everybodys situation is different, in my case the Pros far outweigh the Cons and I really had no issues at all with one in each hand in the same session ( If I had more I would have done them all )
My next install I will have 2 or 3 in the same session ( Vivokey Flex one, xEM and a {hopefully} new 2in1 xSeries)

Thanks for the note @Pilgrimsmaster, I’m going to do both at the same time now. Actually, I was looking at some of the self-install information and if I didn’t already have the appointment, I would seriously consider doing it myself.

@koteeq Does your PM3E write to the HF side of your NExT without any issues?

It doesn’t even detect my NExT, I was unable to find a sweet spot, but I didn’t actually try hard, because I can write easily with my iPhone.

Hmm, that’s unfortunate. I just programmed my second NExT using the same method. First thing I did was feel around the syringe packaging, still in the plastic pouch as well to determine where the actual needle of the syringe was. Then, I repeatedly issued lf search while I moved the needle around the coil at the same time as rotating the PM3E so that it would alternate between parallel and perpendicular to the copper coil. Once I got a hit, I stopped moving, tested lf search again, and if it hit, I immediately issued lf hid clone <ID of tag to clone>. At this point, the tag seems to stop responding to lf search but does respond to lf hid read. After that, I went and tested it on two separate readers and I was granted access both times.

Once I have the NExTs installed, I’ll try and recreate this connectivity, if it works I’ll make a video.

The antenna works great, thanks

Here is a sneak peek at one of the coil test rigs (the final design will obviously be much neater - this board is purely for testing):

I have a project coming up that will probably involve me making my own antenna and that test rig for the RDV4 looks really handy, are they available by any chance?

Not the test rig, as far as I am aware.

You can try reaching out to @TomHarkness for some direction

Unfortunately these aren’t available at this time, maybe later down the track!

Also trying to figure a neat way to make these dual frequency on single ferrite rod so that we don’t need seperate antenna boards for 125 / 13.56. However this may be a v2 thing

Thank for the update, can’t wait too see the new proxmark antenna.

With the PM3 as a bundle option?
This excites me very much.

Some people will come out of this quarantine

My plan is to come out closer to

Is this something I can buy somewhere? Or are there gerbers that I can ask china to make into things for me? save me an hour or 4 blowing of the CAD cobwebs 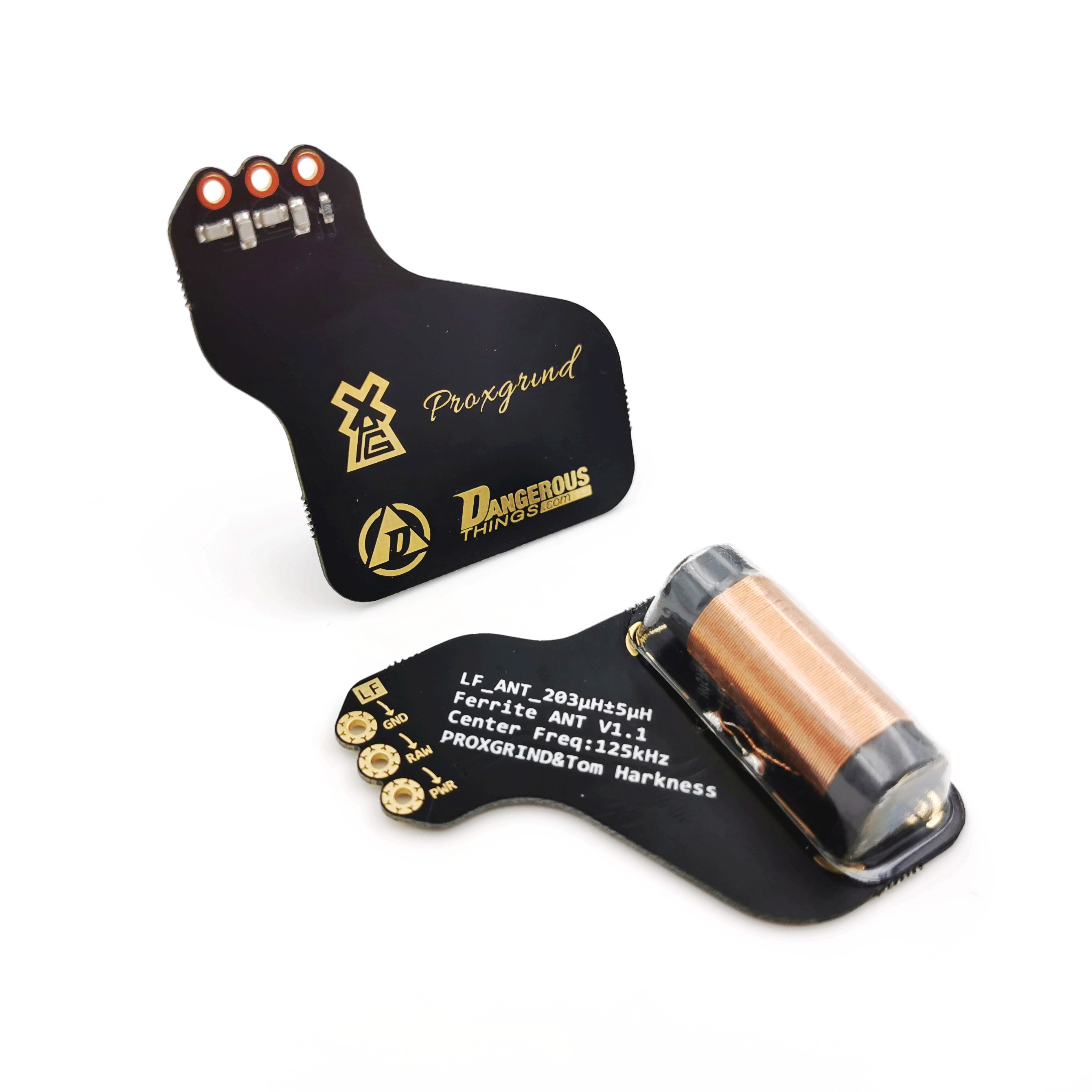 thanks @Kauko, but I meant the antenna Dev board Tom was using to prototype on

“That’s a prototype for testing

it was designed by Rfid Researchers Group and myself for my antenna R&D and produced by a factory in Shenzhen.” - @TomHarkness