I saw a video about dangerous things a while ago. It looked great and I aways dreamed. Recently I’ve been incorporating several DIY home automation systems to my home as it’s going through some changes.

I had a eureka moment about dangerous things. I hate keys, and I was looking at getting a xNT NFC Tag [NTAG216] chip, along with a Asec IGEST strike release to put some of my node mcu’s to good use.

The trouble is I’m a novice when it comes to electronics & code. I understand basics, I hand built my own mech keyboard based on a teensy 2.0 etc. But I can’t just jump into something knowing what exactly to do.

One of my main problems is that I can’t seem to find a decent (Yet cheap) reader to go on the wall outside my door, something that can’t easily be pryed off and bypassed. I want to ideally connect it up to a nodemcu that will be running code that will recognize my and a few select other chips/tags to gain access. I’d then have it send a signal to power on a relay that would in turn power the strike release allowing it to be opened. I would also like to add a function to have my alarm system turned on and off by the tag. That would be very convenient, but that can wait.

I am currently refurbishing the outside of my door and thus need parts quite urgently. I am UK based JIC.

Dependant on the success of this, I’d really like to have my car RFID enabled. No more keys! Anyway, I appreciate any advice.

EDIT: Also I was wondering would it be better to use a 125 chip as opposed to the 13.something NFC tag?

I think you might find our PN532 reader should work ok. You would need to connect it to a teensy or arduino or some kind of microcontroller to do authentication, but it should work.

The alternative would be to get an xEM and an xEM Access Controller. You’d need some kind of relay and cheap analog timer circuit most likely so the strike will stay open a few seconds longer after you remove your tag from the reader antenna.

Thanks for getting back to me amal.

The access controller looks pretty decent. I saw the video of the board you built. That’s exactly what I’m looking for. Would It be possible for you to explain in a tad more detail & parts list for sorting out the timer circuit?

What happens is, when you present a tag to the access controller, the white wire goes high and +12v flows to the reed relay (engaging it and opening the strike) and the capacitor, charging the cap. When you remove the tag from the antenna, power stops flowing from the white wire, but the diode stops current flowing back through the access controller, so the cap discharges through the reed relay coil, which takes about 7 seconds before the cap loses power and the reed relay opens up, locking the strike.

Make sense? The giant size of the capacitor is the only real issue. If you don’t need 7 seconds, try a smaller electrolytic cap… maybe 1800uF - 2200uF would do the trick, without being so damn huge.

One other thing to note, the large size of the cap takes a huge inrush of current to charge… that puts a strain on the internal components of the xEM Access Controller, which may shorten its life. A better design would use something like a 555 timer circuit to control the relay and just use the 12v “signal” coming from the white wire to trigger the 555 timer. 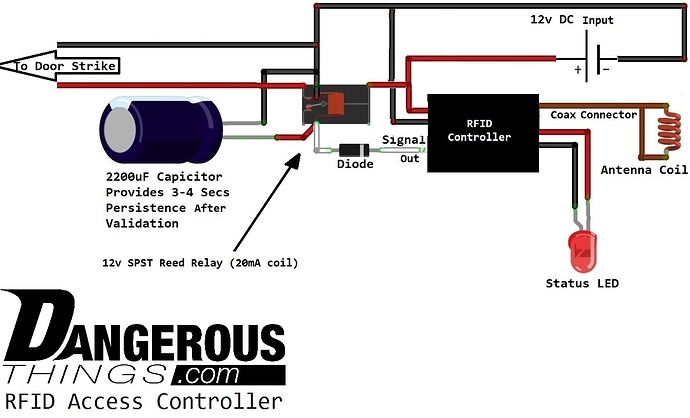 That does make sense, I always get baffled at what “exact” parts to use.

I’ll have to have a think about the decision of either using a cap like you did or the 555 timer. I’m assuming you’d use separate power to power the 555 timer and then the 12v output from the eXM access controller to “switch” the timer to an “on” state. I’ll have a look around google to try and figure it out.

I’m very appreciative of your help and time

The chip choice really depends on what features you want to use and what systems you need to be compatible with. I have both due to compatibility issues. If you are building your entire world around a chip though, I’d go xNT because you can also use it with NFC devices like smartphones on top of your access control projects. The down side is that those access control projects are more involved at the moment because we lack a simple access controller for the xNT. We started designing one but other projects took priority and we’ve not gone back since.

I’ll stick with a exm and decide later if I’d like to have a xnt installed.

I was just wondering, with the access controller, am I able to snip off the antenna and hook up a flat one that would look nicer on the door frame?

I’ve got a 555 chip coming soon so I’ll have a play about on a breadboard to build the circuit, just because of the longevity seems better than “risking” it with a timer.

I was just wondering, with the access controller, am I able to snip off the antenna and hook up a flat one that would look nicer on the door frame?

I mean do you think it would be possible to epoxy it in a project box to make it a bit more sightly?

Ideally I would like it to be concealed behind a hollowed out border of the door, but I doubt that would be feesable

Probably not feasible… and unless your door panel is plastic, not metal, it would be nearly impossible to put the reader antenna in the door. Mounting on glass is your best bet.

If I could use thin piece of glass and fit that into the frame around the door with some nice edge trimming, putting the antenna behind it. I’ll have a go with some different ideas prior to installation.

And again, thanks ever so much for your help and time.

The glass would need to be wider and taller than the antenna. A small window the exact size of the reader antenna would still interfere with the magnetic field generated by the reader antenna. As you recall, magnetic fields tend to be shaped like a sphere or doughnut… they balloon out from the conductors (wires or copper traces) in the antenna in all directions, so the shape of the field will cause it to collide with any metal even near by the antenna. Sometimes the impact of this is small, like having metal on just one side (like I do with my antenna placement in my car), so mileage may vary… test your designs first before cutting up your car.