I placed an order for the xNT deluxe bundle on May 16th. I got an invoice immediately and an “order complete” email a couple of hours later. I searched all over that email for a tracking number but it does not have one. So then I was hoping there would be an “order shipped” email with tracking within the next day or two. But now it has been four days and no tracking number or any indication that the order has shipped.

Everything I have seen on the forum indicates that DangerousThings ships very quickly, usually the same day or the next day. So after four days with no indication that it has shipped I am starting to get worried.

I just received the product. At first glance it looks great. The keyboard reader works perfectly with the tag that came in the kit. I have already made my computer unlock using the keytag. But the xLED seems to be completely non-functional. My phone will not read it. The keyboard reader, which reads the keyring tag just fine, does not read the xLED field detector. It does not light up in response to anything. This makes me really worried about whether the implant is going to work or not since the xLED is essentially the same thing as the implant. I suspect this might mistakenly be the 125kHz version rather than the 13.56MHz version.

The RFID diagnostic card operates perfectly, showing strong signal when the card is parallel with the reader, no signal when perpendicular, and the signal fades in and out as you move the card further and closer. So that’s pretty cool.

I have not opened the packaging yet as I am not ready to implant it yet. I have tried to read the xNT through the packaging but as expected, it does not work.

Hopefully after opening the actual xNT packaging it will prove to be functional. Fingers crossed. I am going to try to get a read before actually implanting it. If it reads successfully then I will be all good. I really hope the field detector is the only dud and that the implant is not nonfunctional as well.

Can you take a close up photo of your xled? Rest assured the implants ARE NOT the same. I test all xleds before they go out. But on rare occasions, they may go non-functional. If this is the case, I will replace it immediately. Let’s first make sure you actually have the correct xLED.

I also wanted to make sure your phone is not in sleep mode and NFC is indeed enabled on the phone. 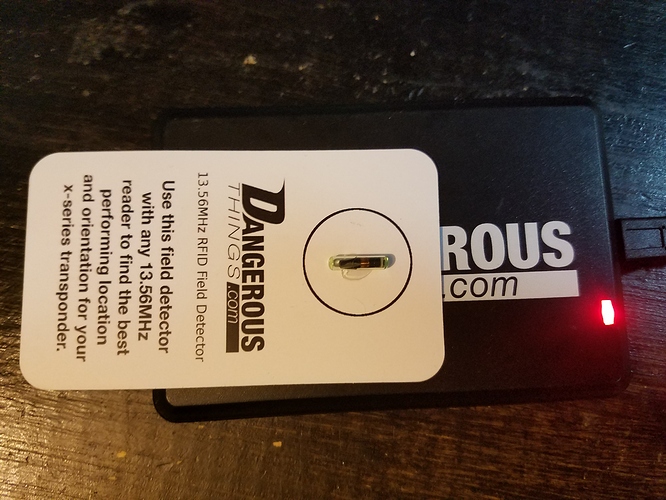 Here’s a picture of the xLED, glued to the card, sitting on the RFID reader. The reader does not read the xLED. The reader reads the key fob and card that came in the kit just fine, but not the xLED.

My phone is also definitely not in sleep mode and reads the key fob and card just fine but not the xLED. This little guy is either dead or is a 125kHz.

It’s a 13.56 MHz unit for sure, and I’m assuming you’ve rotated the card around the reader? This is indeed dependent on proper rotation and a specific area, like a metal detector if you will, so you know where to put your implant and at what angle to a reader.

I am assuming you’ve rotated the card all over both the back of your phone and the KBR1 at this point. I would be remiss if I did not mention this. I’m going to assume you have and send you out another one today.

I’m sorry for the inconvenience Ronnie. Look for a tracking number to your email.

Yes I’ve rotated the card all around the reader and the phone and it is completely unresponsive. Maybe it was damaged in shipping. I will try to take a super close up of the chip. 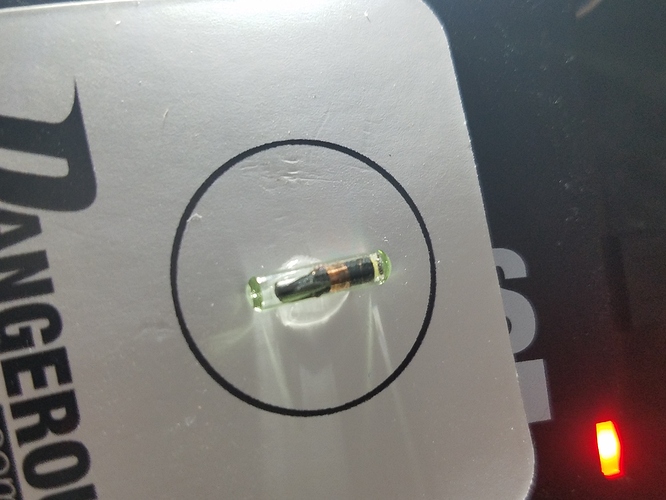 This is the closest shot I could get. The device does look damaged, although I don’t know exactly what these are supposed to look like. It feels perfectly smooth and like there are no cracks. And it came in your protective capsule where it looks like it would not have been able to be damaged. But it’s not working.

Okay, I just didn’t want you ending up tearing your hair out when getting the new one.

Let me know if you need anything else!

Well your response to the dead xLED has been incredible. The very moment I posted that one part in the kit that I got didn’t work you were handling the situation in seconds. That was top-notch. But not getting a tracking number when I originally placed the order and getting no response from the support forum or from the “contact us” page was frustrating. For six days I couldn’t get any response from anyone at all to indicate that anything had shipped.

Now that I’ve got it, almost everything is great. Yes, the xLED is dead but that’s not much of a concern. The USB reader already works. I haven’t tried the PN532 module yet but I’m sure I’ll be plugging it into an arduino before too long. The NFC key fob works. The NFC card works. I’ll be trying the implant later tonight. Hopefully I can get a read before injecting it, but I’m going to go ahead and implant it anyway whether it can read through the injector or not.

I noticed that the “Professional Guide to 2x12mm Transponder Installation” link from the “how to approach a professional” page is now a 404. I know I have seen and read the guide before. What happened to the link? Is there an alternative? I remember it being a very good guide.

You’ve tested it in this exact spot and this orientation? (this is a 125khz, but sames rules apply) 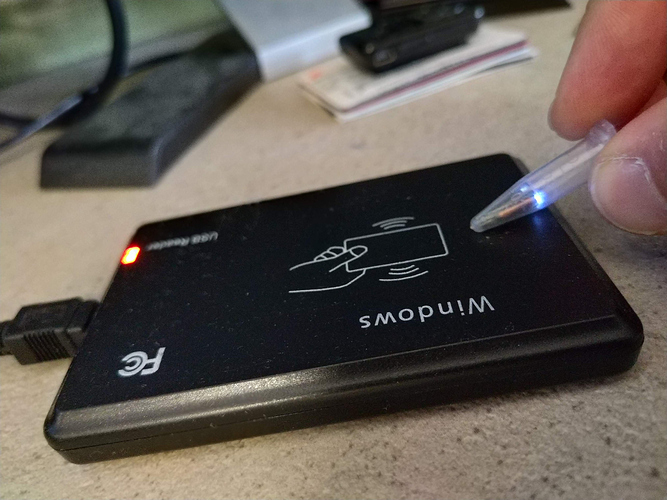 Yep no light at all in that exact spot.

I’m sorry you did not get a response for 6 days. We try to respond in less than 24 hours. This last couple of weeks have been a comedy of errors with our website, and we had issues with our contact page to boot.

We are in the process of upgrading the website to make it more usable and this has been quite painful. You’ve been a great sport. Thanks for hanging in there.

Hopefully what we’ve invested as far as time will make things a bit smoother for you and others.

Just got the implant installed. My wife did it for me after watching the videos. I know you are supposed to have a professional install it but I’m a bit erratic. The installation seemed to go well and my phone is reading the implant through the bandage just fine. Interestingly the keyboard reader will not read it. I do not know if it is because of the bandage or what but my phone reads it just fine and that was my primary concern so I am very happy with the result. Maybe the keyboard reader will read it once the bandage comes off or just after some time. But if not, I’m not concerned because what I really wanted was for my phone to read it which it is doing perfectly.

Glad to hear you had a successful install. The area is going to be a bit swollen for a few days and the implant needs to be within 2mm of the KBR1. Once the swelling goes down (and hopefully your new xled will be there by then) you should be able to get a read. I tested your KBR1 and got a read with my xNT which was implanted deeper than normal; therefore I needed to gently press the area between my forefinger and thumb to the unit to get a read. Unless it was implanted deep, you should be able to rest your hand in the proper orientation to get a read when the swelling subsides.

I guess the swelling has gone down just enough because I can now get a scan on the KBR1. I was worried the KBR1 was never going to be able to scan me but it did finally. Multiple different android smartphones had no trouble scanning me the entire time but the KBR1 was being stubborn. But as of now it is finally working.

I was surprised to find out that you don’t have to download any app or anything on an android to scan an NFC implant. I thought if I wanted to show it to anyone that they would have to download an NFC reader app. But it turns out as long as they haven’t disabled NFC you can just touch an unlocked phone to your hand and it will read and display any text record on the screen with no additional software outside of what comes on a standard android. I was very pleasantly surprised by that.

Unfortunately in order to unlock my phone with it I would have to root my phone, which I would love to do except my phone has a faulty USB port that makes it impossible to root since you have to use USB to root it and the USB port will not stay connected for more than a few seconds. Hopefully I can get a new android phone soon and root it so I can use my implant to unlock it.

Other projects that I hope to do are using the implant to unlock my car, which I know a lot of people have already done. My car already has an arduino wired into it that works as a bluetooth remote starter so I can start the car from my phone or from a Raspberry Pi that is mounted in a cabinet in my house with a fancy touchscreen GUI that looks all Tony-Stark-ish. The only struggle here is finding a good spot for the reader. I can’t just plant it in the door handle to unlock when I touch the handle because the range won’t work.

Another project that I would like to do is to make a computer mouse that only works when my hand is on it but I don’t know if the range is going to work. I kind of doubt it.

But all-in-all, I am 100% super happy with this implant. It turned out fantastic despite my installer having no idea what she was doing. For anyone reading this, I would highly recommend you have it installed by a professional. My installation process by someone that had never done it before and her only qualification being a former mortician, the installation took about 2-3 minutes and lots of pain while she was struggling to drive this big needle into my hand whereas a professional like Amal does it in about 2 seconds with very little pain. And I am very lucky that my implant came out to be the perfect depth and not too deep where it would be difficult to scan and that it came out with a good orientation, perfectly parallel to the index finger bone.

The part that I am most happy about is the fact that any Android smartphone can scan the tag and read whatever message you wrote on it without having to have any app installed. As long as they haven’t disabled NFC, which I have never seen anyone other than myself do, they can just touch their android smartphone to your hand it and it will scan and display whatever message you wrote to your tag.