Other then unlocking locks, doors, phones, and computers, I have had interest in using implants to unlock guns.

But, every single smart gun design or concept I’ve seen seems overly complicated and prone to failure. If I built/owned a smart locked weapon, I would want it to unlock and fire faster than a weapon with a regular safety. I would want to it be actually more reliable than having to feel and check if my regular dumb weapons safety is engaged or not.

Also, I wouldn’t want to have to worry about large, complicated, and battery powered electronics inside the weapon.

This all made me think of the Colt 45 1911, an almost 120 year old iconic American weapon from WW1 that is still relevant today. Unlock most weapons today, it has a large mechanical Grip Squeeze Safety, that is actually shaped to make near perfect contact with the location where most biohacking enthusiasts implant their tags. This design was implemented on the 1911 so soldiers fighting in the muddy and sometimes chaotic trenches of Europe wouldn’t have to worry about accidently blowing their man parts off but also knew that when they drew their weapon, they could trust that it would put down the Kraut they were struggling with.

Can this large mechanical lever action of the 1911 squeeze safety grip potentially generate the necessary power to briefly energize a small capacitor, power up a small NFC reading SoC, and then if it authenticates an authorized tag, finally trigger a small actuator that would allow the weapon to complete the unlock/arming action?

Would pursuing this concept or some kind of similar concept be a waste of time? Is generating the necessary power with such an action outside the realm of feasible?

The formula for potential electricity generated with kinetic motion at 100% efficiency is:

What I have no idea about is how much power such an SoC would theoretically require. Does anyone have thoughts on this? 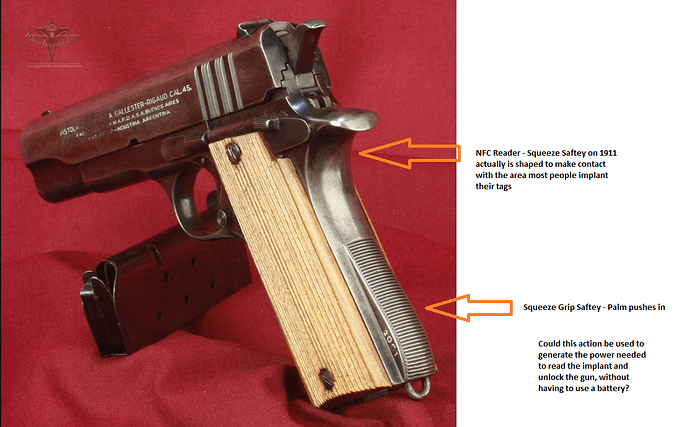 Interesting idea. I think kinetic power generation of this nature is too inefficient to create the kind of power necessary to not only read an implant and also mechanically disengage a locking device. Your only option would be to gear up the lever action so you’d have to really squeeze the shit out of it to get enough power… but that also means time and bulky gears. Have you ever tried to squeeze the lever on one of those hand powered flashlights? The gear ratio means you are squeezing the hell out of that lever and it moves down very slowly as the gears inside whirr away. Only after a full squeeze are you able to get about 0.25 seconds - just a flash of light - from the flashlight… and we need a little more power than that.

I think the answer is a combination of an inductive gun case and possibly solar (on case, in gun, etc.) to keep things “topped off” at all times… and have a fail mode the customer is comfortable with… either fail safe where the battery dies and the gun won’t fire… or fail secure where just before the battery goes, the gun unlocks itself.