The chip is not there

Is there any report of that actually happening? Or are you being speculatory and potentially spreading misinformation?

kinda… to date I’ve had two people report this… one provided some iffy x-rays, but all attempts to follow-up and get doctor information for confirmation and further study have been ignored.

Essentially in both cases what has allegedly happened is that the device makes its way to the heart, flows through with the blood, finds its way through the pulmonary arteries up to the lungs, and gets caught where they branch off and get smaller as they turn into capillaries… and that’s where it sits. No discomfort. No issues. If the second case is to be believed, the doc said it should just sit there because any attempt to remove it would be far more dangerous than leaving it there… even laparoscopic surgery… according to the customer anyway.

I see. As a phlebotomist I would be shocked considering the amount of effort it takes to get a much smaller gauge needle into vasculature and effectively draw/infuse into it. But there’s Murphy’s law I suppose.

i shared this concern, which is partly why i wanted to confirm the cases with the actual MDs involved… alas, no such luck. the cases were a few years apart, and both customers went totally silent shortly after i started asking for medical provider information to build case studies.

Unfortunate. Well I hope they are okay at the very least.

Are you calling me out for being a bad guy???

Hello people of the internet I am a man who like to live free. I love running and swimming and loved the idea of being able to do those bare handed. That brought me to you! My father was murdered, shot at the heart in the surgical room of his own hospital while he was performing a surgery, in 1996, I was 10. I inherited the hospital and the avoidance of the health society in my small town close to Rio de Janeiro. I wanted the flex chip, but I thought the injected one would make it easier to d…

@amal seeing the post, the persons vasculature is pretty large(very typical of more elderly patients) definitely large enough for a 14g to thread into. I could see a chip implanting into a vein like that. As a phlebotomist who has access thousands of veins over the years, what I would recommend to prevent this in the future, is to:
A: most obviously avoid veins at all cost and potentially consider alternative implant locations if there’s a lot of veins running through the area
B: Add a step to the procedure to check for a hematoma before implanting. A method I would use is backing the needle out almost to bevel(a laser etched line would be great for this, but not necessary if professionals are doing the install. They should always know how much needle is left if they know what they’re doing), lift the needle up slightly, pausing for a moment to watch for a hematoma, then advance the needle to the proper depth, and implant the device. If you do this, you can almost be certain you haven’t hit any vasculature, and if you did you will clearly know and can terminate the procedure.

Disclaimer: I’m not a doctor, but I am a licensed phlebotomist who has stabbed(in professional terms, performed venipunctures) literally 10s of thousands of needles into peoples arms and hands, and this is what I would recommend from that experience.

After re-reading that case, I too actually believed it was possible… however attempts to contact them to get contact details for their doctor to confirm went cold… probably a result of the rough ride the guy had on the forum.

With regard to the suggestions… we do not mandate a specific procedure per se, we leave it to the professional to do the job right. In the only procedure training video we have (for Spark) we do mention vasculature… but it could be called out better I suppose. 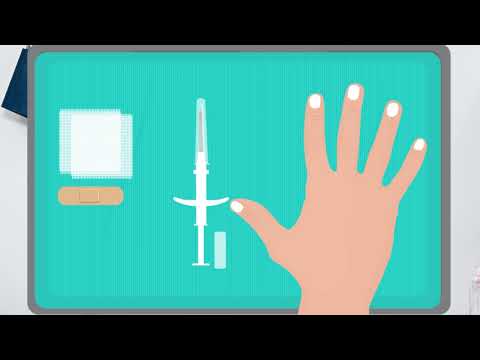 But let’s also consider the following;

11 year old is insane! That image of the injector in the hand is horrifyingly wrong and looks like a direct into muscle stab. What a crazy and interesting story!

yeah, kids are shiddy installers. my daughters wall is full of crooked posters put in with different sticky bits of things. horrible.

Now that scared me. Below I insert a video of the assembly of this chip. I didn’t have a hematoma after the insertion but I did bleed.

This is what we refer to as bevel up, from my experience, bevel down yields better results with regards to healing, bevel up can cause a skin flap that can leave a small lump when healing.

which resulted in the implant having to force its way into position.
So it may be deeper than you expected, or hoped for.

You can see in this example, the blood already starting to pool, BUT

Here at least you see that the implant was ejected…

It was difficult to see if anything came out during the initial blood wipe.
My feeling is, it is quite deep, here is what I would try:

Measure the length of the Needle, and use that as your search datum from the install inscision.
As it is an xLED Get a high-power reader and try to make it blink in the dark.
Get a magnet, and see if you can feel it, or possibly “stick” to it
And as was mentioned above, get an xRay

Thank you for your reply. Half the syringe was filled with blood

image1236×803 29 KB
Those 2 globules leaked from the syringe, after the implant exited from the needle

I don’t want to shit on your installer, so I will just say I think there should have been a pinch and roll of the tented skin to remove any blood vessels

that is the final frame of the video, it could just be a blood droplet, BUT it is very “implant shaped”

Based on the video I can’t see that the implant would have came out. It looks like it’s just super deep. If you can I would get an xray, unless you can find it with a high powered reader. As @Pilgrimsmaster stated the plunger was fully depressed so we know it wasn’t stuck to the syringe. I have a feeling that it’s in your arm somewhere, or there’s a small itty bitty chance(not trying to jump to conclusions, but this would be a prime example of how it could happen,all the right factors are there) that it did get injected into a vein. Watching the video they hit a vein out right, and if they followed it straight up and down…

It’s more than likely still in your arm, but you can’t find it. The NFC field generated by your phone will light the led, but it’s touchy and your phone doesn’t create that high power of a field. Try to get a good higher powered reader(USB or otherwise)

I did a magnet test but found nothing. Earlier I tested it with 2 smartphones, fliper and proxmark.

I’m going for an MRI today.

If it’s deep enough to not be able to feel then it’s too deep for any of those readers. You need an industrial type of reader not a hobby one, basically not powered on battery or USB. Is the MRI of that location? If not it shouldn’t matter. If it is that area you should be able to see it.

Just ask the radiologist if you can get an x-ray ‘just to be safe’ then at least you’ll know if it’s lost or not for sure.

which resulted in the implant having to force its way into position.

Just another note. When such a large needle is needle is inserted, it is normal to damage enough small blood vessels that bleeding is guaranteed, but the rate the pressure built up was pretty fast. Some damage to larger blood vessels almost certainly occurred. Evidence of this is is the sudden appearance of pressure just above the needle incision, as well as the rapid swelling around the injection pocket.

This is another reason why it is critical that the needle be withdrawn before ejecting. If the needle somehow did make it into a large blood vessel, you will be pushing it right into the vessel… whereas retraction of the needle should withdraw it from the vessel as well, and hopefully the device will deposit into the fascia and not somehow re-enter the vessel when ejected.

@mfries18 I will be putting this notation in big bold letters and flashing alarm bells when we revamp our procedure guides.