The flexNExT is now in limited release!

hah well… it means that these are “artisan” implants… I make all flex implants by hand myself and, well, sometimes I tire of slaving over the workbench and want to switch back to desk work… then after a while I long for the bench again… so basically it just means I don’t want to commit to availability… but chances are I will keep making these well into the future… it’s just, they might be on backorder from time to time.

Curious thought, since I have seen this thing put in the back of the hand would the sheer size of this thing cause cross talk with a implant in the usual spot in the thumb webbing?

There was an image somewhere of this thing working next to a standard reader. I’ve been assuming the safest thing to do so far would to have a dedicated hand for this.

EDIT: It was in this same thread… it’s too early 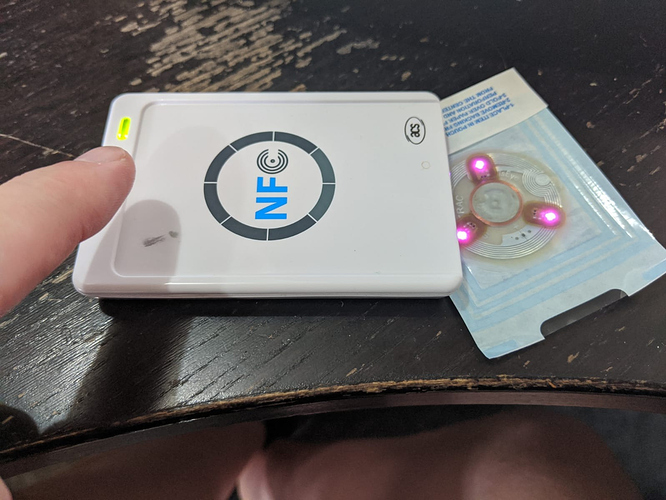 I haven’t run out of space on my forelimbs yet, but if I had, well… let’s just say some of us have enough space lower down for a flexNExT

Would it really be a problem tho?
While using f.e. NExT in the webbing, the flexNExT would be at a very high angle, almost 90°.
Same if you have your NExT in the edge of a hand.

@Ottomagne May I ask how your healing process is going? Did you experience any rotation, hematome, swelling, pain? Just curious

Absolutely! I’m planning on doing a full write up after I take out the stitches and can get my hands on an ACR122U to try the “underneath” read (since my phone isn’t powerful enough to do that on its own), but the jist of it is:

I’ve had no real problems at all. My implant hasn’t rotated as far as I can tell, no blood pooling above the implant, very little swelling or pain. I do believe part of this as been pretty diligent aftercare - I wore an ACE bandage over my implant site for about an hour at a time for the first 5 days or so to maintain slight amounts of pressure on the site to help prevent blood pooling, and I was taking ibuprofen religiously (4x200mg every 6 hours, but that was also to help with my motorcycle accident injuries). What little swelling was there went away within about 3 or 4 days, and I’ve been able to get really good consistent reads with my Pixel 3. The range isn’t much to brag about, but that’s more the Pixel’s problem than the implant’s (which is why I’m trying to hold off until I get an ACR122U to make any judgment calls on my site choice). Looking at it now, the stitches seem a little irritated, but I’m not sure if that’s true or if they’re just red because they’re healing up. They should be ready to come out in a couple days, if they’re not already ready. Here’s a picture for posterity though: 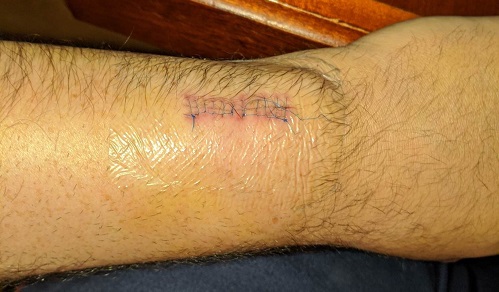 Thanks! Glad to hear everything went so smooth!
And it looks really good, considering it’s about one week old now - nice healing

Interesting that the incision was done lengthwise. Looking at my wrist, my first thought was that it should be done across the wrist, so the scar line blends in with the natural creases.

What’s that shiny wrinkly-looking material over the implant? Is that “tattoo artist shrink-wrap” - whatever it’s called - or has your skin turned into something alien?

Also, whoever did the suture looks pretty skilled.

Honestly, my installer asked me which way I thought he should do the incision, and I chose that way because I thought it made the most sense from the way we were situated (me sitting in a chair across a table from him). It seemed to work really well - he had a ton of leverage and didn’t really have to worry about the rest of my body while he worked. Honestly, it’d probably look better in the long run if he had done it across the wrist, but I kinda dig the lengthwise scar, so it’s not a bother for me

The shiny stuff is Tegaderm! My installer recommended it for aftercare, and it’s been wonderful stuff to use. Bought a pack of 8, but I’ve only had to go through 4 so far (mostly due to applying them too earlier when the wound was still wet from me cleaning it).

I was honestly really impressed by this guy’s skill and professionalism. I had checked out his work before, and was already really impressed beforehand, but the implant went more smoothly than I ever could have anticipated. I was honestly expecting an arduous process getting it put in, but I can honestly say that it really wasn’t any more painful than getting chipped through an injector. He took a couple different passes on the stitches too - if he wasn’t happy with how it was closing up, he would just pull it out and redo it again.

Yeah, that sure looks pro. The only time I had the occasion of seeing sutures that clean was the “one-wire” job my knee surgeon did 35 years ago - that is, a single run of catgut snaking within the thickness of the skin from one lip of the wound to the other. Totally invisible from the outside, and leaves a single line that disappears after a few months if you don’t go under the sun, but a real screamer to pull out

I’ve experienced how prompt customs can be here. Took em over a month to release a parcel from another EU country once.

I guess I can eat my words: my doNExT just cleared customs, and it took less than 24 hours to do so. That’s uncannily fast

We have special arrangements with DHL

Haha kinda. We developed relationships within the logistics department that interface with customs agents in various countries and ports. 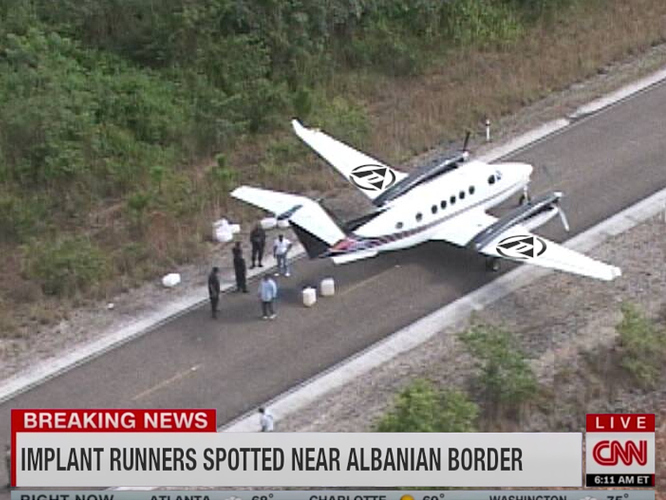 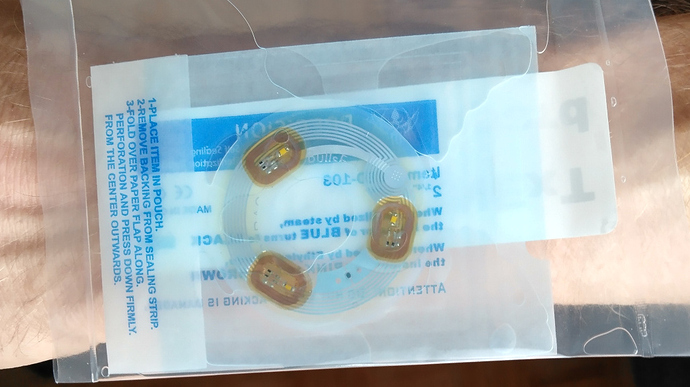 I ran a quick check cuz I ain’t got no time right now: it rings (so at least the UID reads) and the blinkies light up. But it doesn’t read through my wrist, and barely through my hand. Maybe it’ll do better under my skin. That’s with an ACR-122U.

Also, I can see there’s potential to create a multi-coil configuration and address each blinkie separately. I’ll get cracking on that when I have some time.

For now it’ll sit in its pouch until Sept 5th, and I’ll read it every now and then, to give it some time to fail if it must.

Question on this new form factor.

I know we’ve texted stuff like the NExT and xEM on MRI’s up to I think it was 7T. do we know where these new Flex installs would land on that?

There’s not really enough copper to generate heat from eddy currents. I suppose there could be some ferromagnetic material in the NTAG 216 chip, but it would definitely be less than the x-series ferrite core, which is safe. Does anybody have a flexNEXT and a magnet?