The PMK’s were expired, the other 2 were supposed to be 2% but were1

The both of the Lidocaine Patches (topical PMK’s were expired}

I also got 2 of the traditional Injectables, there are all packaged in sterile sealed packaging. The packaging is amazing! Anyways i was getting ready to do the Vivokey Spark 2 and one of the other of the 4 bought. We opened 1 of the 2 injectable PMK’s were extremely impressed with everything about the entire kid. We’re getting everything laid out and almost ready to go. We were reading the included papers inside the sterile outer packing and it says that we were supposed to get a 5ml 2% ampoule. Not sure what is right and which is wring. Not the end of the world, just want to get this figured out so that I can go ahead and get them all implanted. I’ve been really learning and researching it all for about a month, the professional who does implants here ( a closish friend) said no way with the patches they are expired and looking back at my Recept, they had already expired when I placed my original order. The 1% or 2% PMK he said I really should find out for sure, mostly because I paid like $125 just in the 2 patches and the 2 complete PMK’s. I did open either of patches, and just the 1 PMK didn’t use anything at all. Every part of the kits that is packaged as a sterile products, is still sterile. I am mainly here at the fourm for this because, I am worried how long my Kit is already down in its useable lifetime for me? I am not going to open any of the implants obviously until I talk to the team at Dangerous Things, just trying to see what other people have seen… anyways thank you all for your time.

Also no the Patches & PMK’s were not a part of my Bundle (The Lifestyle Bundle)
Which I’ve had inside their boxes and inside of a locked and humidity controlled cabinet here that noy one is allowed within 5 feet of.

My Kit was also a bit different with acc and things.

DT customer support is amazing (@mdanger) if you haven’t already I recommend the help feature of the website. 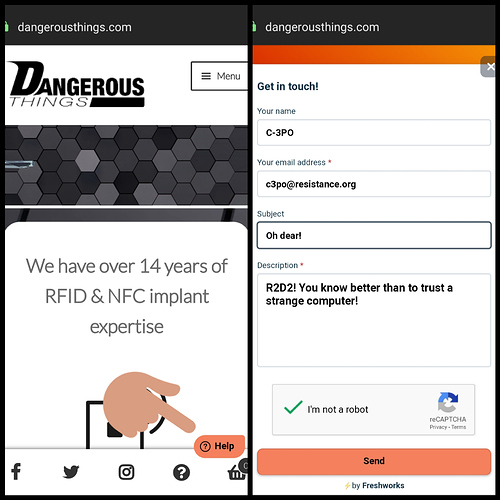 Cant comment on expiry dates etc but Michelle will help sort it with you.

Just a heads up the PMK is 1% or 10mg/ml that’s almost a universal standard for lidocain. It does say 1% on the site as well as 1% pictured in the product image.

I like to think if you have purchased a kit for subcutaneous injection you are aware of how to calculate the dose, toxicity and can compensate for 1% vs 2%.

Can make a non-official comment on expiry dates in general for topical creams and patches. They’re by no means a given. For example, my source of topical lidocaine has an expiry of two months. This is because he has evidence from the manufacturer of the base topical cream that it will last two months. It will last years, as it’s sealed, sterile and in a foil pouch, but he can’t say it will last any longer than two months.

It is a well known fact that 95% of medications don’t really expire. Some of them just lose a bit of potency if you really exceed the expiry date. But there’s an expiry date, and perfectly fine and useful medication is routinely destroyed by people who care about not being sued. Same as food cans really: tin cans don’t expire. Most people don’t know that.

I suspect topical creams are in the same category - i.e. you can apply that expired lidocaine cream 10 years after it’s expired and it’ll work just dandy.

For the record, I think you’ll be hard pressed to find someone in here that felt like injecting an X series tag without any pain management was too painful. You don’t mention what the others were so maybe you got a flex, but x series are no worse than giving blood.

Doing an X-series on yourself can be difficult without pain management. I did my xG3 myself because my assistants were vomiting elsewhere (and i had two). Was glad for the lido cream.

In the finger tip with no lido would be hell I feel like.

In the finger tip with no lido would be hell I feel like.

Yes, I guess I should have qualified my statement with “when implanting into normal locations”. I wouldn’t want to do that even with lido.

Doing an X-series on yourself can be difficult without pain management.

Well yeah everyone is different. I’ve self installed an xNT, Spark and xG3 any level of pain that would make me consider even an advil.

But I also believe pain is just electrical signals in your brain and can be overridden so YMMV. lol.

I did mine below the wrist, actually. Rather sensitive spot but the cream (which has finally arrived for testing by Amal) works absolutely a treat (I use a speciality 10% lido/tetra cream)

Note how I said “may”, though.