The xNT and the mysterious 46/48 byte problem

Sometimes, when customers first scan their xNT or flexNT, the app they are using (usually NFC Tools) will indicate the chip is an Ultralight and only has 46 bytes or 48 bytes of storage space, and it will not write any data. 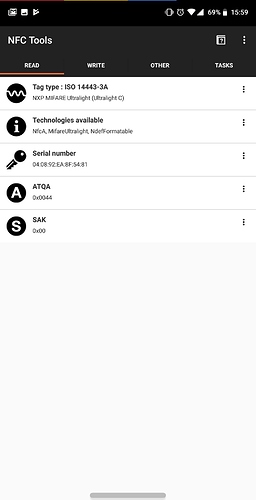 This kind of error can occur for several reasons, none of which has to do with the actual NTAG216 chip inside the xNT or flexNT. In short, most NFC applications use a complex series of guessing games with the tag in order to detect what type of tag it is, and how much memory space it has.

For example, let’s say the chip is a Mifare Ultralight, which is the most common type of NFC Type 2 transponder out there. The memory schema looks identical to the NTAG family of tags, with far less storage space (64 bytes, with 48 bytes available for NDEF data). The NTAG is essentially the next generation of Ultralight chip, though both are still sold and made into new NFC tags. An NFC reader has a few methods it can use to properly identify the chip it is talking to;

In the end, I have no idea what NFC app developers are doing… but whatever they are doing, it’s shit… and xNTs (and flexNTs) are sometimes being detected as 48 byte Ultralight tags.

The first thing you should try is use whatever NFC app you’re using to “erase” or “format” your tag. This should fix the “46/48 byte” problem. Basically it should write an NDEF message with a blank NDEF record to your tag, then afterward it should be detected normally.

If that fails, you can try our Dangerous Things Support Tool to write a blank NDEF record to your tag. We do this by directly issuing commands to your tag, rather than asking the Android NDEF library to do it. After that, it should be detected properly by your phone.

If you try both of these things and they don’t work, completely power-cycle your phone. Yes, the classic “turn it off and back on again”. I have no idea why this works, but I’ve seen it work (only after you try the other two things first).

2 Likes
Error when trying to write to xNT with NFC TagWriter by NXP
New to this world! Need some help setting upA