So I moved into dorms. The door uses a key/bolt. Let’s fix that.

I have a pn532, Arduino, an access controller V2, and the deadbolt 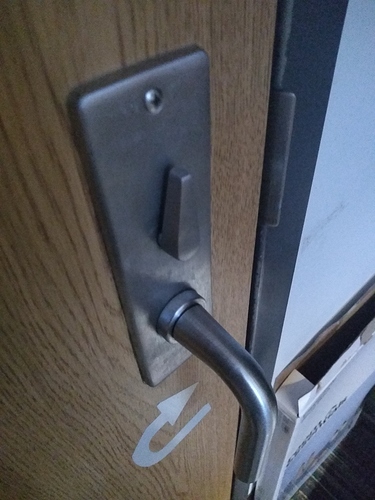 Is there a way to have a servo just run back and forth constantly?

I’d like to just use the output of the access v2 to activate the servo constantly back and forth while the implant is presented.
Less parts, less cost.

I’f i can’t run the servo back and forth and if I NEED to give it a pwm, I will use the pn532 and Arduino nano but I’d rather not go this route if I don’t have to use up my last Arduino.

Any advice or ideas? Can I just run the servo back and forth with just the access controler or do I need an arduino?

Yep thats exactly what I would do, pn532 and arduino read tag and have that drive a servo to twist the bolt.

Check the force required to turn the dead bolt and make sure you get a servo that is spec at least 1.5x that in stall torque at the given voltage you will be using. Could probably use a fishing scale, hook it to the bolt, and pull it until it turns noting the reading on the scale.

Metal gears are a must for this project. A servo with a quick movement would be very beneficial. Faster response means faster unlocking. The problem being, when you are in a bit of a rush and not paying attention, you will try to open the door before it’s completely unlocked. This will bind the dead bolt and damage the servo.

Well I just moved in so I don’t have any scales or anything special. There might be one I can borrow I’ll have to see.

You seem to know servos, can I give it power or some solid signal with the relay on the access controler or do I have to give it a pwm with the Arduino? I’d rather save the Arduino if I can

I recently made a knockoff of @ODaily’s toolbox project using an arduino and a servo to turn a camshaft that locks the drawers. From my limited understanding there is not a way to have a continuous rotation signal of some sort where you would then toggle power instead. You have to have some sort of PWM signal, which the easiest method of that to me is the arduino. I found the servo library to be very easy to use. If you’ve never used it before, I’d be glad to help.

Thanks for the input, i guess im using up my other pn532/arduino.