One quick note, @Devilclarke’s point about the second relay making the trigger wire higher current may be needed in some applications, however rare.

The one-relay method is what I was getting at, I didn’t mean to have 2 in there. That said, if there has to be a particularly long distance between the xAC and the garage button, I could see the low current output of the xAC being an issue.

Yeah, I’d leave the second relay there, that is a considerable run. Probably fine without it, but its not going to hurt you to leave it there.

Didn’t know that. Probably why you needed two relays. If you really want to play with it, to get to one relay, then try using the relay closest to the xAC, and run the two wires from the button 48ft (using existing wire, of course).

That’s a long long way though.

Relay at 24ft? Divide the problem in half. Not practical, and still alot of wire to deal with.

Step 1 Put one of your spare tags on the reader with tape to keep it on. . That way it will stay on while you test it. Now measure the voltage across the wires at the beginning of the 48ft run, and again at the end of the 48ft run. The wire will have some resistance, this will measure how much that resistance causes the voltage to drop.

Step 2 Put the signal wire back so that it runs through the 48ft wire using only the second relay. (which probably won’t work). Leave your spare tags on the reader with tape to keep it on. Measure the voltage before and after the 48ft long run.

Sounds like the xAC can’t supply enough juice to keep the voltage up at the second relay. I bet step one has a slight, but acceptable voltage drop, but step 2 drops enough voltage that it can’t activate the relay.

Edit. Fun thing #2 Check the voltage before and after the diode. It should drop .7volts.

. The wire runs up to my attic then along the beams where 2 walls are (roughly 22ft and 18ft ish), then down out of the attic lol. Lots of wire but makes it look super clean 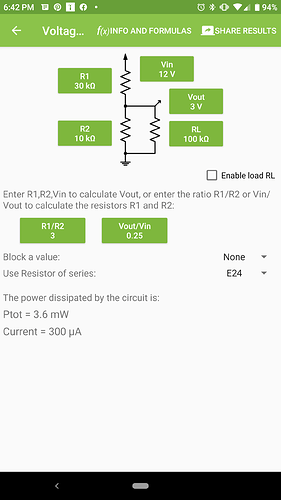 Screenshot_20200602-1842111440×2560 164 KB
Ok. I thought about this earlier and now I have to know if it would work. So I forgot I had an extra visor remote for my garage door. If I wired the xEM to one of the buttons wouldn’t it make it I wireless system. My only problem would be decreasing the voltage from 12v at the xEM to the remote board which uses a 3v battery. Wasn’t sure if I could just put in 2 resistors in series. 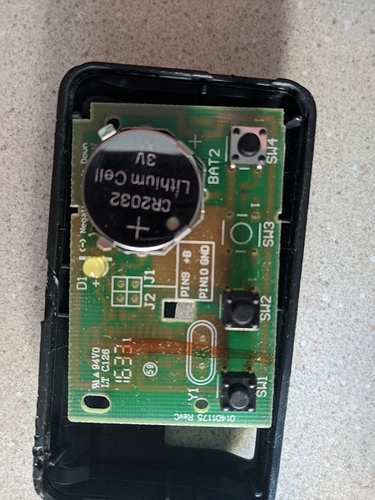 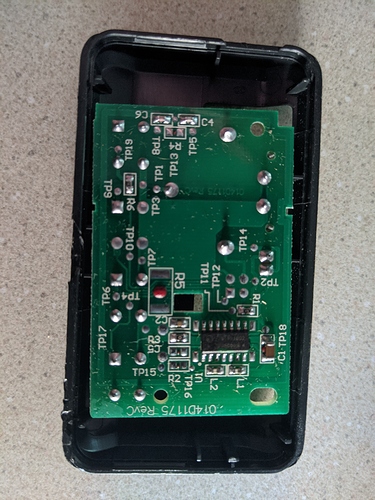 no that wont work, the issue is is the xAC gives out +12v when a valid tag is scanned. look at this diagram below the switch is the button in the remote, as for your 3v yes voltage divider tapped off the 12v (red wire) and feed that into the remote instead of the battery (make sure to remove it).

I also don’t understand the point of the 3rd resistor is in that voltage divider, it will work with 2 (10k and 3k3). 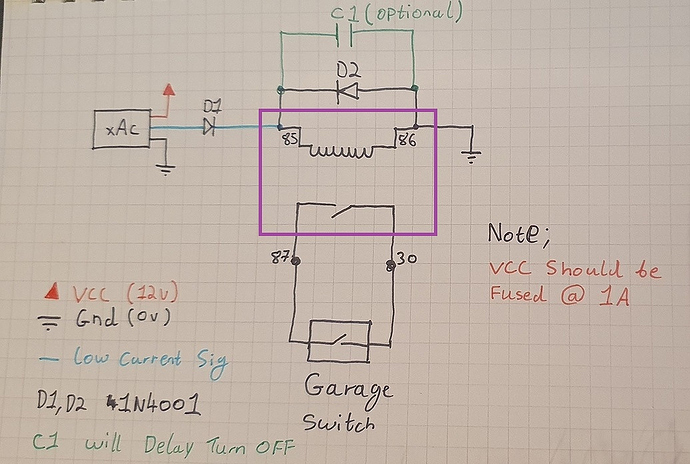 Don’t really understand the 3rd resistor either its a screenshot from the electrodroid app I have. I was a little confused by your response. It looks like the board would be connected to the signal wire and to ground, but in your response you said the resistors should be added between the red wire and the ground. The 12v power supply goes the the xEM and then sends the signal to the board right? So I would remove the battery and wire the signal wire with the resistors in line and then another wire from the board to ground to complete the circuit. 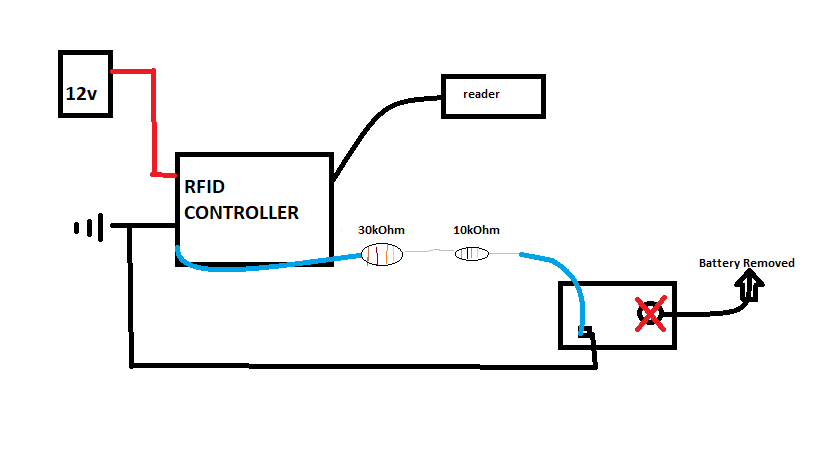 If I wired the xEM to one of the buttons

No… don’t do this. I’ve explained this elsewhere, but basically you are going to burn shit out.

A button is a simple device. It shorts two contacts. That’s all. It’s literally just a piece of metal that you physically press down that shorts two conductors together. Typically speaking, the circuit designed to detect user interface button presses (basically all low voltage digital devices) has it’s own ideas about the electrons it wants to push down one of those conductors, and detect coming back in on the other conductor once the button is pressed (shorting them together).

Now let’s say your dad comes in with a hotwheels toy car track and glues it to the drawbridge and says “here come the cars motherfucker!” and instead of a tiny toy car making it’s way down the hotwheels track, he drives his 1967 Ford Mustang GT over you, your shitty little train track, the Christmas tree, and the dog. That’s what it’ll be like if you try to connect the access controller’s output wire directly to the button of your garage door remote.

So what’s the answer? A relay. A relay is what? It’s a device that shorts conductors together on command. Sounds kinda like a button right? That’s right, it is just like a button… only a button that you can control with another circuit! You connect a relay’s electromagnetic coil pins to the white output wire and GND of the access controller… when the output wire goes active, the relay’s coil will physically pull the contacts closed. Therefore, you solder the relay’s contact pins (the common pin and NO or “normally open” pin) to your garage door opener’s button conductors, and boom… you have an alternative, access controller controlled way to short the conductors of the button in your garage door remote… and you, the dog, your shittly little train track, and the Christmas tree all get to live (well, not the Chistmas tree, it’s already dead… just doesn’t know it yet).

I think this is one of my favourite posts on this entire forum. Educational and hilarious.

I think this is one of my favourite posts on this entire forum. Educational and hilarious.

don’t forget to nominate it for BEST POST OF 2020!

Thanks man its all so clear now. 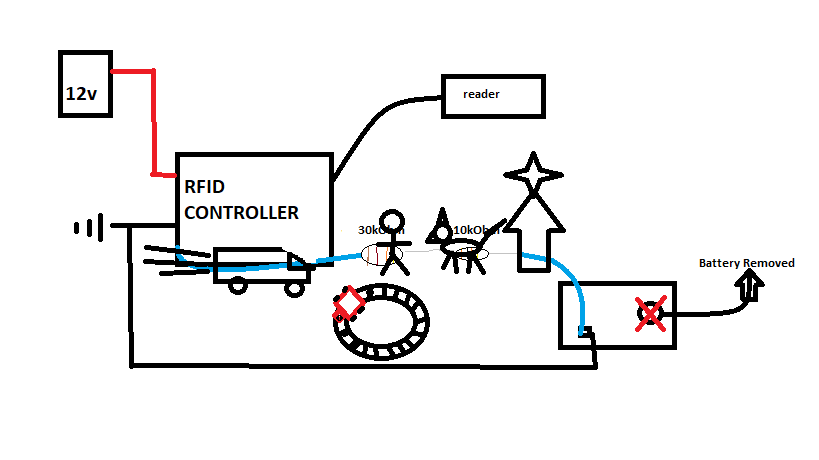 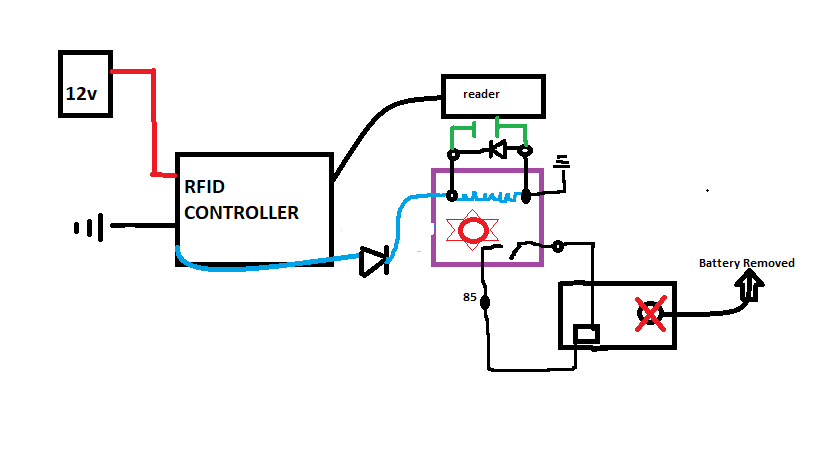 Would that work? Just wire it the same as if I was wiring it to the button on the wall?

I also don’t understand the point of the 3rd resistor

The 3rd resistor (RL) is an imaginary resistor representing the ESR of the load - usually calculated using the supply voltage and current draw. In the case of the remote, current used is tiny, therefore RL is so large as to be basically irrelevant and can be ignored.

Generally you want the current through the load to be an order of magnitude less than the current through R1+R2 (i.e. 10%) to keep the voltage stable under load. This just is a weird way to let you enter your expected current so it can change the voltage divider resistors to allow the right amount of current while keeping their ratio the same to maintain the voltage.

Yeah i spotted that after some sleep, it was early am.

@darkdragon885 yes thats what I was trying to get at, wire it exactly the same as a wall button.

For your 12v to 3v tap it off pretty much anywhen that is 12v permanent.

Yeah i spotted that after some sleep

Got another question for you guys, since I have to buy the parts to do this anyway, would you suggest using an automotive relay or is there a cleaner way I can put this together?

Can you solder? There are a number of small relays that have pins to solder into circuit boards. Plus you can get circuit boards that are just rows of holes. This also makes mounting diodes, etc, much easier.

But… for the circuit board, I’d try amazon. Better selection. For the relay, stay name brand.

Thanks, I didn’t even think of using a blank board. Thats a great idea.