Most likely, no, they are different things. Just because the outer case looks the same doesn’t mean the insides are the same. Without knowing a model number or anything we really can’t help you.

I’m reasonably sure that DT does not mod them, they were purchased that way.

If you have an xEM controller that you opened up then just look at it and compare them.

I’m not finding anything with that model number. I’m with @bepiswriter, I doubt they are the same. Upload some pics of it

I can’t find anything regarding an ALTS1-1119 on the internet. Perhaps that’s a serial number and not the model number? 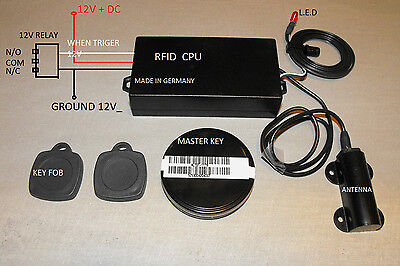 The kit consists of an RFID reader coupled with a 125KHz antenna. These are being used to prevent theft of autos, provide increase security in buildings, to operate electronic gates, garage doors, computers,etc.

So what exactly doesn’t work the same?

Did you by chance get a mod list? I was looking at the same thing on ebay that was cheaper that i could play around with other projects.

It seems it functions the same, the xAC only outputs when a tag is present (does not latch)

I purchased a 4 pack off another seller, exactly the same functionality as the DT ones.

The kit consists of an RFID reader coupled with a 125KHz antenna. These are being used to prevent theft of autos, provide increase security in buildings, to operate electronic gates, garage doors, computers,etc.

From what I can tell, they are the same, right down to the hole in the sticker where someone used a screwdriver to open it up after the sticker was installed.

No difference, output goes high on white wire when tag is held then goes low as soon as tag is removed.

Yeah, the module seems to be a imobiliser (I’ve found several for sale with 10-15wires and diagrams associated) it appears of its sold as access controll then it’s already been modified

Hey @Devilclarke and @amal , the xAC mod add on you were discussing, is it worth investigating the 10-15 wire version further?
If they can be sourced,It may be more easily converted to

Finally made my car implant compatible

With a voltage regulation mod for the key fobs.
I was also thinking after I mentioned the 12V key fob battery, the 12V could be directly wired to the door lock module (or relay mod for negative switching)