I just implanted my xLED HF field detector and I’m wondering if I can test it using an iPhone. I’ve downloaded a couple of NFC reader apps but no luck so far. Any ideas?

What model iPhone do you have, and what version of IOS is it running?

I use Simply NFC on my iPhone X and it works pretty well.

It did take a bit for the swelling to go down enough to get a good light out of it, but thats to be expected when you get stabbed in the hand.

That one worked for me. Thanks for the expedient reply. I have to basically hold it right on the skin for it to work but I imagine when the swelling goes away it’ll be a bit better range by maybe a mm or two.

Do all the phone apps pulse the light? Would love to make it solid. 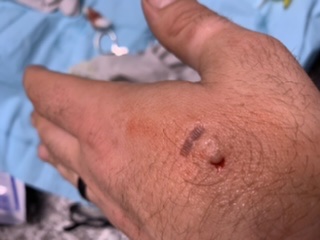 What’s kind of fun is if you’ve got the xLED next to an NFC chip and they’re close enough to be powered at the same time. Once the phone picks up the NFC chip it’ll keep the light solid until you move it.

This is the reason I went with the simply nfc app. It has a multi-scan mode where it will continuously scan and keeps the led lit while it repeatedly reads my nfc implant.

Is the app called simply nfc? And is it for apple or Android?

Yeah it’s entirely called “simply nfc” and it’s for iPhones. I would imagine there are other android apps that can do multiple reads that would be similar.