Against the advise of just about everyone, I did the install myself, and worse yet, by myself. The way I look at it is if it’s going to be screwed up, I’d much rather it be me that screwed it up. Haha… But really it’s about the adventure, the experience , and the learning. Sure I could try and find someone to do it around here, but where’s the fun in that…this is about biohacking after all…so lets hack some biology.

So I tried to be as prepared as I could, though I still didn’t do everything the way I had planned. I even made a checklist for myself that ordered the things I needed to do to reduce the possibility of cross contamination. I read up and watched all the videos I could. I even ran through the whole procedure in my head several times. But I’ll be honest, I’ve had worse injuries in the shop that were kept together with dirty paper towels and electrical tape that probably should have gotten stitches… so I’m not too worried about all this… lol.

I’m sorry I am mumbling in the video… I’m not saying anything important. haha.

I’m sure I’ll get some negative feedback, and that’s ok. If the video has to go on the “what not to do list” I’m ok with that. At least other people can learn from my stupidity.

Install was not painful at all. I think giving blood hurt more. It’s a hair sore at the moment (I did it like 45 minutes ago). Virtually no bleeding.

If I had to do it again, I think I would have injected it a little farther towards my wrist. I went in deep, then pulled out a bit as instructed, but injected it as I pulled out even more (also as instructed)… I should have injected it to fill the pocket that I pulled back from, then started pulling back and inject the rest. Even though I made sure to inject it parallel to the bone, It seems to have rotated a bit. Guess we’ll see where it lands when it heals.

My S7 reads it no problem. Let the fun begin!

Yellow is the injection path. Blue is where I thought I was putting it. Red is where it’s sitting. Reviewing the video, I can’t understand how it got into that position. To me that’s much too close to the palm side of the hand…(?) 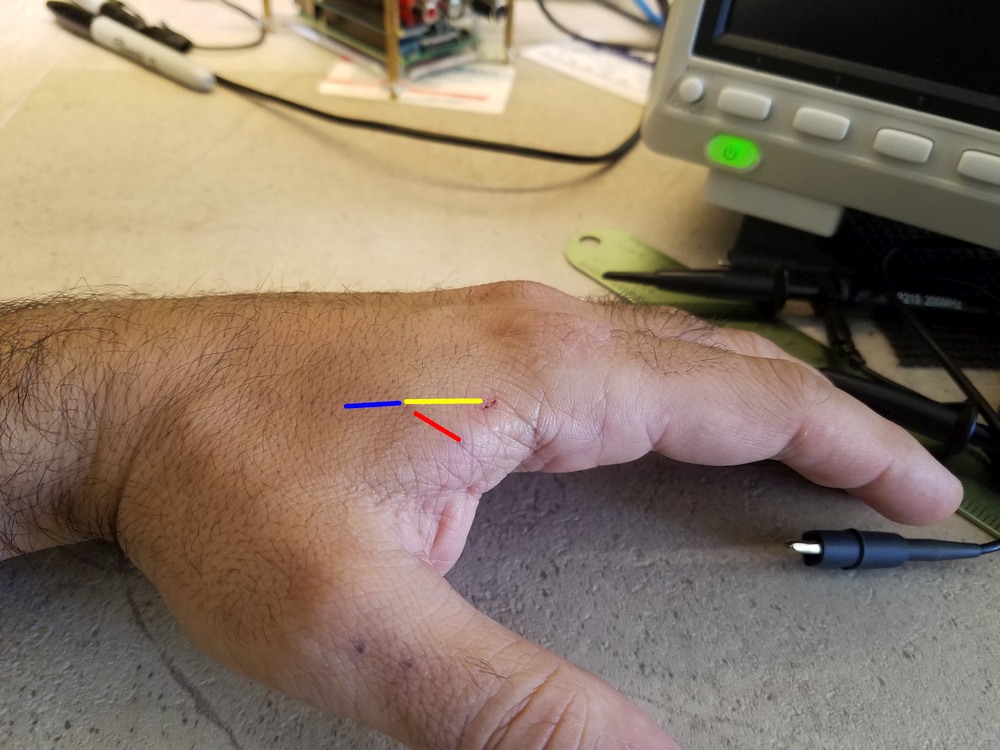 Its a bit close but it should be fine, and it may have got there by shifting around it takes some time befor the implant settles into a location and stuff starts to grow back around it.

A little update…day 5…
I feel like it’s migrating even more in the wrong direction…at least slightly. But maybe not… 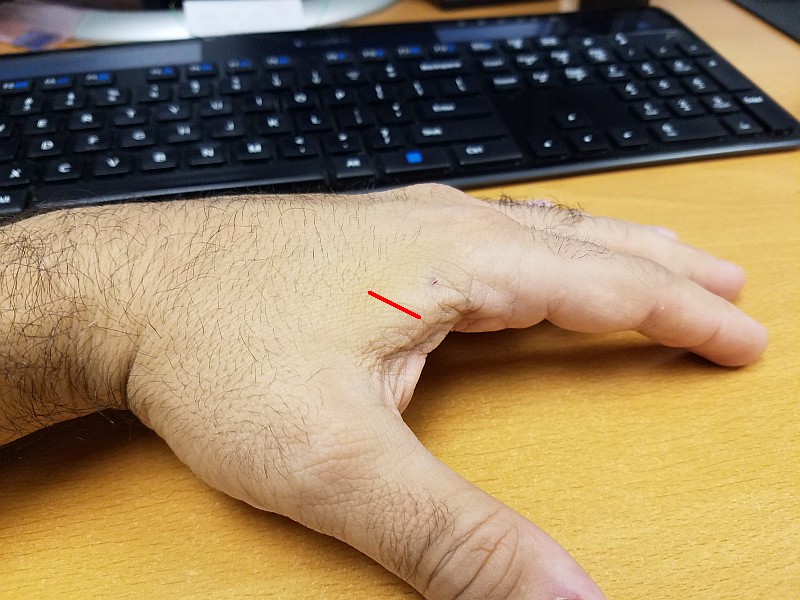 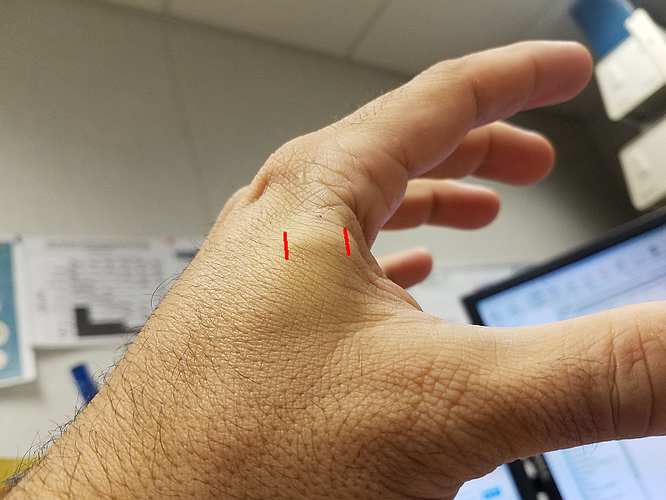 Other than that, it seems to be doing well. If I just leave it alone, its fine. If I start messing with it, I get a very mild and dull burning sensation for a few minutes…so I don’t do that. lol. I thought at least in the beginning that I’d be noticing it all the time, but that’s not that case. Normally I forget it’s even there. Seems to be healing as certain actions, like shaking water off my hands, I would feel it, and now I don’t as much.

One thing I noticed is when showing people, they want to feel it. Well they always seem to want to harshly poke at it instead of just a very light touch that is needed… so be warned… lol

I’m in highschool so everyone that I show wants to touch it, but I’ve never noticed pain from them touching it. And when they ask about it’s durability due to it being glass I’ll let them hit it. I think you might want to watch it carefully and see someone if it starts to hurt randomly as it may be constricting blood vessels or something

Edit: yeah looking at it, in my opinion, it shouldn’t be that far forward but let’s see what Amal says because I only know from my own personal experience

Yeah that position isn’t ideal but as long as it doesn’t impede your ability to close your hand, work that fold of skin, shake hands, hold things, etc. then it’s fine. The one concern might be that the one end may extend over the index metacarpal bone a bit, which could increase risk of breaking if hit or trapped between that bone and a blunt external force.

The ideal course of action is to leave it be and not try to move it back into position. Encapsulation is more important than position at this point… unless like I said it’s causing problems being in that position. You really don’t want a loose tag roaming around under the skin, so again I’d leave it be.

OK this is weird. I haven’t played with it at all the past couple days, and even before, I only would lightly touch it to see where it is. Today went to feel where it was and it wasn’t were I was expecting it. It has suddenly migrated significantly. 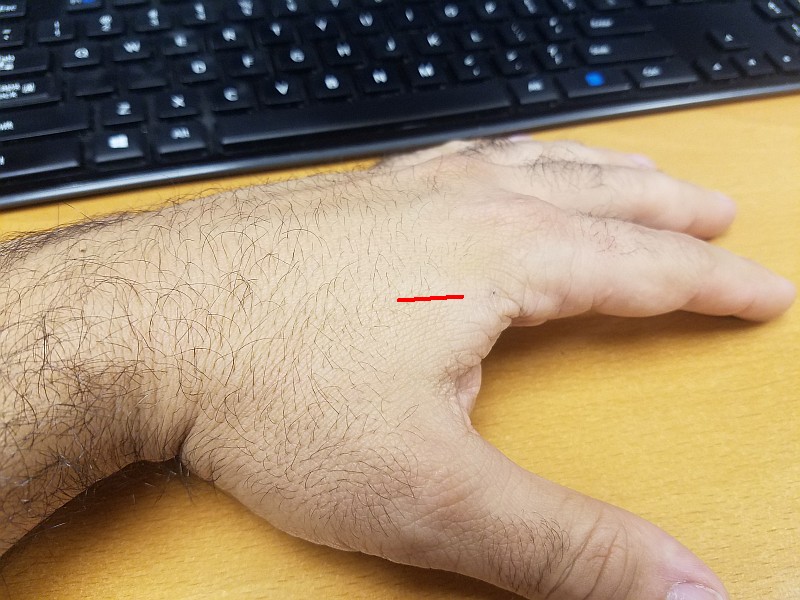 I did just hit that area (not hard) on the edge of a table which is what prompted me to feel where it was.

Overall I think it’s actually in a better spot.

hah agreed… that is a better spot! let’s hope it stays there! 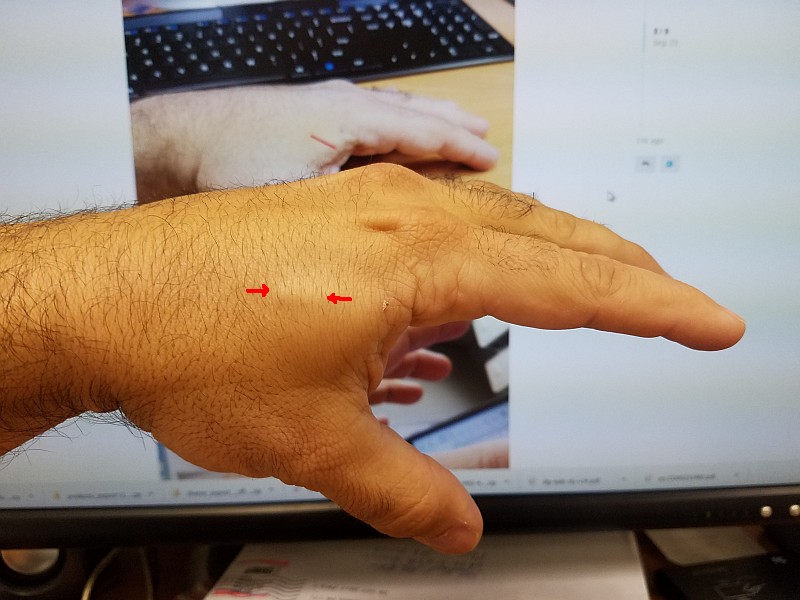 It continues to migrate back into what I feel is the original pocket made by the injector. Think I’ll go get some of those prenatal vitamins.

Not sure if this is the popularly acceptable injection site…but I did not want any visable trace so I injected it along the line shown in photo. I did it in the office restroom at work the day the mail room delivered it to my desk

very easy to do myself absolutely no pain and no blood really to speak of, it took 5 minutes from start to finish opening the package took longer than the injection process. Injection site healed in about a week and I’ve had no problems scanning works perfectly for me. 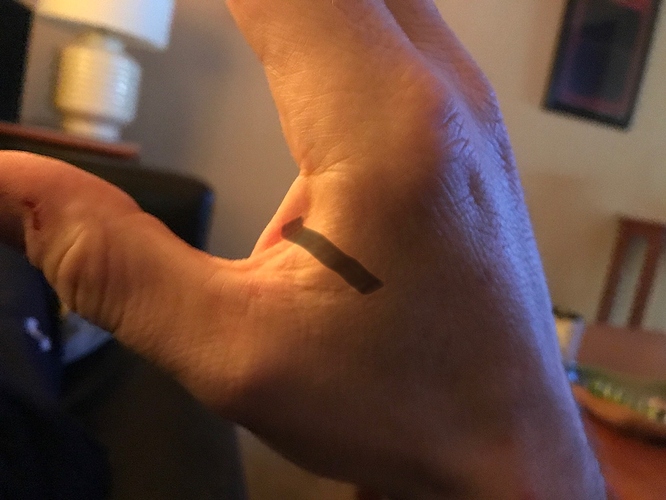 That’s a bit risky… being close to the fold of skin could become a problem, and the DIY approach makes control very difficult… it could end up in muscle tissue, which would be pretty bad. Most of the time though, sheer luck seems to work out for DIY installs haha… I hope your installation continues to be trouble free 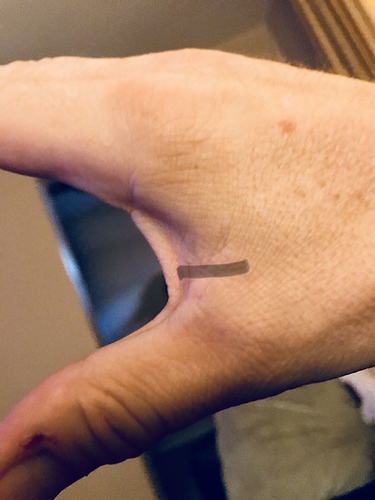 That’s a bit risky… being close to the fold of skin could become a problem, and the DIY approach makes control very difficult… it could end up in muscle tissue, which would be pretty bad. Most of the time though, sheer luck seems to work out for DIY installs haha… I hope your installation continues to be trouble free

Man watching that tag move around over the past few weeks has been interesting, I find it hilarious that it somehow found it’s way back to the original spot, good luck man!

It’s been 3+ weeks now. All is good. It stopped moving around and is still in the “good” spot from the last pic.

Is there bone below the implant? Can you notate where your index metacarpal and thumb metacarpal meet in that picture? Looks too far towards your wrist.