Interested in implants but what effect will this have on your body when exposed to metal detectors at court houses, xrays(3d) at airports, and mri machines at hospitals?

Im guessing maybe the xray might damage the device since it is radiating it like a microwave? If its a glass vial will it break and pieces travel though your vein to your heart/brain?

Also will mri machine rip it out of your hand or body part like a magnet, or would it get demagnetised and not work anymore. Like how the 13mhz anti theft tags work, the high frequency deactivator at checkout is strong enough to break the capacitor permanently, thus deactivating the security tag.

I frequent airports, and request pat down vs the giant cancer scanner box but I thought Id like to know possible side effects of these machines first.

No issues with airports, MRIs, xrays, metal detectors, or microwaves.

Transponder Information What’s the difference between RFID and NFC? What’s the difference between x-series tag types? What can I do with my transponder? Transponder Safety I play sports, rock climb, etc. How durable are x-series transponders? What about MRI compatibility? Can I still have diagnostic procedures done? Are induction ovens safe to use? What about tesla coils? What about airport security, metal detectors, & security checkpoints? Installation Procedure How are x-series tags inst…

We have a Metal Detector at the Airports Visitor Terrace. The Day Tickets works also with RFID.
On one day - only a few people were there, I asked the Security Staff to scan my hands (I have in one hand 2 NFC Chips and one Magnet - nothing showed up with the handheld scanner.

Just a bit of technical data … they are not x-ray machines. They are millimeter wave radar machines. The signal they throw at you goes through clothes but bounces off metal and body parts. At most it penetrates about a single millimeter into your skin, if that. There is a big difference between an x-ray machine and the security scanners at airports, particularly when it comes to exposure to ionizing radiation such as x-rays.

Metal detectors are not triggered and the chip won’t be damaged, MRIs won’t rip it out ,but the area around it will be blurred. Throw anything (even a hammer

my nfc implant shows up a gray color vs lit up in x-ray is that okay ? and why is it gray vs. lit up ? still seem to be fine and is working okay.

I found this also when travelling… mostly no markings but sometimes a box on one hand or both… but always ignored by the screening agent… probably because they can physically see my hands are not carrying any weapons.

The most in-depth website I’ve found is this one; 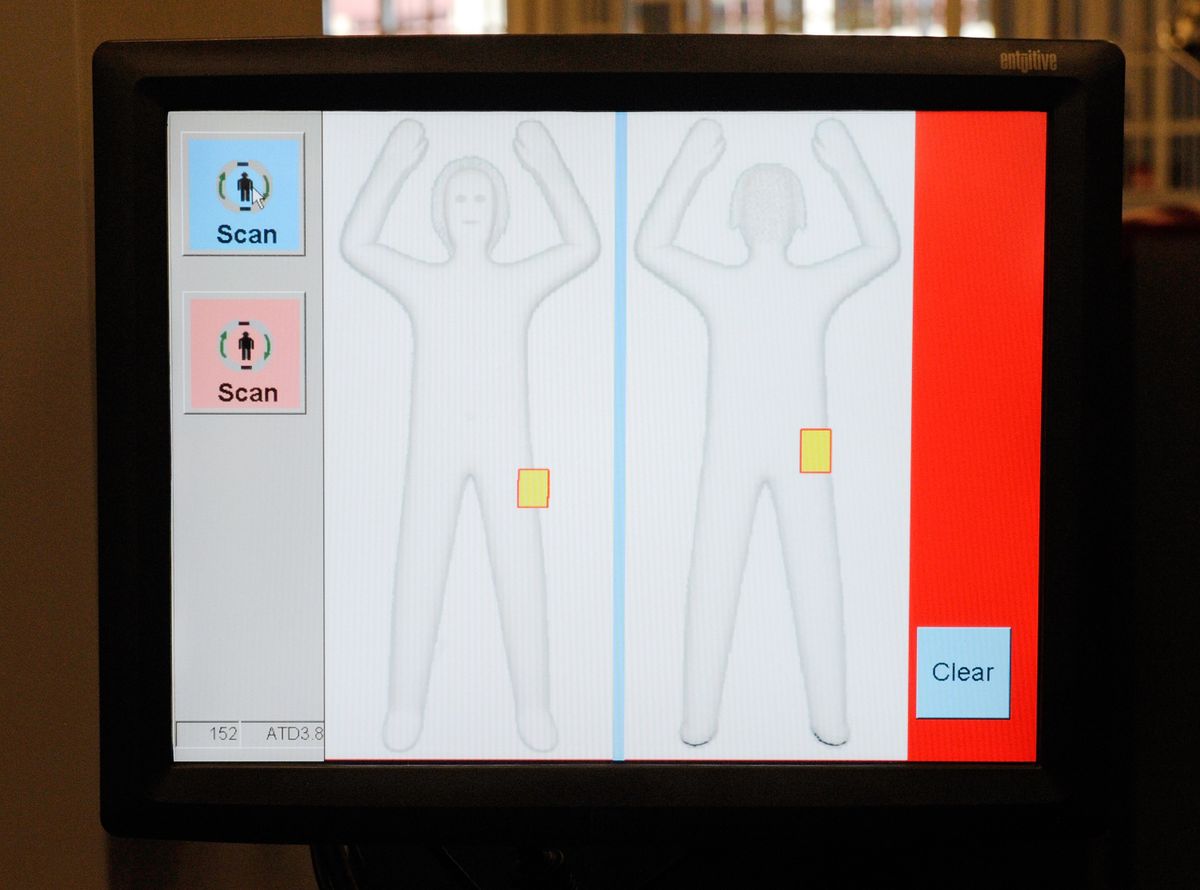 If you've traveled recently, you probably raised your arms above your head and waited for a millimeter wave scanner to do its screening thing. During those 10 seconds or so, did you ever wonder exactly how the device produced your image?

However unless you can access a user manual for the scanner in question, you’re not likely to find out what exactly the color of the box means.

I flew several times since i go the implant and neither the metal detector nor the mil. wave scanner trigger …
If they ever say anything, say its a medical implant, and (in the US) they cannot ask you anything else and have to let you go (unless you present a safety hazard, bla bla bla …)