I figured i’d test my implant on my EMx entry system to my building before implanting it. I cloned it with the RFID writer and then tested with my proxmark to ensure it was the same as my original keyfob:

Unfortunately no matter what orientation I hold it to on the entry pad I cant seem to get it to open. The pad looks as follows: 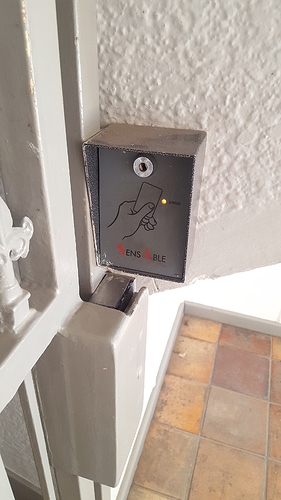 Does anyone have any idea why? I’d like to see it work before I implant it in my hand

I think the problem is the antenna design of the reader. It is very likely that if the diag card isn’t lighting up that the antenna is designed specifically to work with cards. Low frequency cards typically have a large diameter wire coil antenna inside. The diag card LF antenna has a spiral plane antenna with a maximum diameter that is still slightly less than the diameter of LF card wire wound antennas… so there is likely no field strength in the center of the reader antenna coil. There may be significant strength around the perimeter of the antenna coil in the reader, so your best bet might be to get an xLED-LF to test field strength and orientation.

Its actually using the generic keyfobs rather than cards, I don’t even need to have the fobs larger side directly against the reader to get it to work.

Ah hmm, ok. Well, if the xLED-LF isn’t lighting up, then it’s definitely field shape from the reader. One other possibility is that the field is pulsed for a very short amount of time, which may be difficult to see clearly in the daytime. Most wired access control readers keep a strong constant field going, but this could be different. I also see the reader is encased in a metal box… that might also make it difficult for a small x-series tag to be read. Have you tried the keyfob in various orientations or just flat with the reader face? Have you tried the xLED-LF “standing” perpendicular out from the reader face? It may light up in that orientation, but of course putting your hand in that position may not be possible… but it would still help figure out the reader antenna.

I haven’t tried the xLED-LF “standing” out, but I do generally tough the tag nearly perpendicular and have it work. I can try the xLED-LF again like that, I hope it is not that as that would make it rather tricky to use with my hand!

I actually uploaded a quick video to show you, i obviously didn’t spend as much time as I did earlier, but you can see in the video how the normal tag works:

Hmm, ok. The video is interesting. The range with the keyfob standing perpendicular is pretty bad… you basically have to make contact with the front face of the reader. Do you get better range when it’s parallel (flat) to the reader face?

Bottom line though, the reader antenna is not cooperating and it is unlikely you’ll be able to get an implant to work with this particular reader.

The reader works a lot better with the card facing towards it.

Man that sucks on the implant