I’ve been doinking around with the concept of a 55hz tank circuit to function as a voltage detector. It’s a fun idea to think about, but I decided to try to hang a little reality on it.

Reality is kind of a buzz kill sometimes.

Still, I present my failure, the electric toothpick. 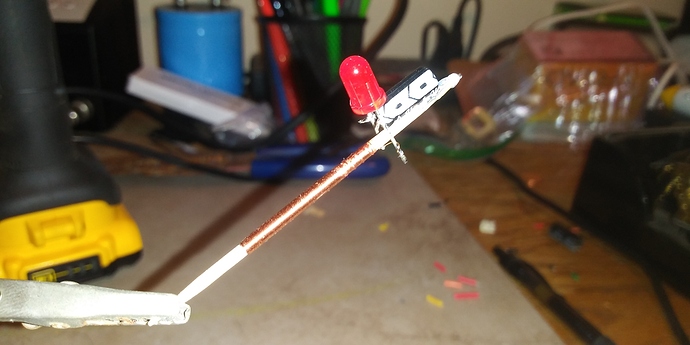 It’s an LED, a 220uf capacitor, and a poorly executed coil. My understanding of inductance in the circuit is fuzzy, but improving. I was aiming for 38 mH, and I might have gotten close, but the ad hoc nature of the build makes that a little questionable. Regardless, I waved it all around the power cord for a 1500w heater running full bore and didn’t get a glimmer out of it at all.

The one thing I did learn, is that the H in 38mH stands for Henry, the unit of measurement for inductance. Which leads me to the conclusion that if you’re going to determine a fundamental measurement of electrical science your name really oughta be much cooler, like Ohm, or Volta.

What guage is the magnetic wire, what’s the toothpick diameter, how many turns did you do?

You’d probably have better luck with a ferrite core of some sort but I’m still new to induction coil design myself.

I used an online calculator. Theoretically, I was aiming for;

Mostly just taking a wild swing at it with the best info I had. I also had to tear apart a 16v ac transformer for wire, so it’s all just work with what ya got time. Better parts are coming.

Yeah my point was that with my guessed dimensions you would not get anywhere near the inductance required. You need 38,062uH with that capacitor for a resonance of 55hZ I believe

Mostly just taking a wild swing at it with the best info I had. I also had to tear apart a 16v ac transformer for wire, so it’s all just work with what ya got time. Better parts are coming.

If nothing else I’m gonna get me lernt some stuff!!

and I personally am coming to hate the uh, mh, H, and MH designation system. It’s not bad if you can stay within one multiple, but constantly crossing back and forth is nuts.

This was originally in a PM, but I’ll just paste it here because other can probably learn from our conversation:

Here’s the calculator I was using. If you enter 220uF and 38mH you get

Screenshot_20200411-112228~21440×499 29.3 KB
The problem is either that the amount of current flowing through the wire you were using for testing was insufficient, or the Inductance was too far off to achieve resonance.

For your testing, you’ll need to hold the coil parallel against the power wire for a very large AC load, like a heating unit, a microwave, or a refrigerator. The load will have to actively pulling power, it can’t just be plugged in or no current will be flowing. Current is a huge part of field strength in this case, because the “coil” we’re detecting against is only a single turn.

For the inductor, you’re definitely going to need an LCR meter if you don’t have one. To calculate the Inductance of an air core inductor with multiple layers, you can use this calculator. It’s pretty good, but none of them are perfect. I still advocate for trying this out with thicker magnet wire to get a proof of concept, rather than banging your head against a wall repeatedly with this 40awg stuff.

EDIT: Also, since your only option is to use electrolytic capacitor (unless you can locate a 220uF ceramic) it’s only going to conduct in one direction. The LED also has that problem. Make sure the negative legs are not both pointing against each other, or you’ll get no conduction on the positive or negative parts of the waveform. Even in the best of times, an LED in an LC Tank circuit is only going to receive half of the potential power being delivered.

EDIT EDIT:
One moooorree thing!
You may want to use a Green, Blue, or white LED. The red could easily burn out and you wouldn’t know. You could even put a Red and a Blue in parallel for testing to broaden the range of possible success until you figure this out.

The 40awg and RED led, are compromises forced by availability. I had to pull the laminations apart on a 115/16v transformer to even get the magnet wire. My only other choice was to do nothing until I could get parts, and that just sucked.

Funny you should mention this. My multimeter, which has been a good loyal friend of 20 years, has disappeared. God only knows where I left it, but it’s been gone for weeks now, which means it’s unlikely to pop back up. I had been planning to splurge on a new one, a Fluke 87V to be specific. But, I didn’t know you could do incuctance with a meter. Time to recheck and re-evalute my choice.

Make sure the negative legs are not both pointing against each other ,

LED orientation does not seem to matter (does not work either way). *Edit, it will matter once working properly, it’s just that’s not the problem Right Now.

I scrounged some bi-colour LEDs from a long ago project. One side should be blue. No Joy there either.

Apparently an LCR meter is distinct from a Multi-meter. So I ordered the one Saturn9 showed. It’ll be here in 1-2 weeks. Non-essential shipping in the Covid-19 age sucks.

Yeah, shipping is borked, and the supply chains are all kinds of fucked up. I don’t remember where you’re at, but I’ve had success ordering from DigiKey because they’re domestic and essential.

Good to hear the polarities weren’t the issue. You’ll get the inductor worked out easy enough once you have a meter. LCR meters are distinct from multimeters because they measure impedance (whereas multimeters measure voltage). They generate a waveform (usually 1kHz) and measure the impedance across a known resistor internally. The test leads are hooked up to that resistance (either in series or parallel) and the meter measures the change in impedance to estimate the capacitance or Inductance. Because capacitance increases impedance at low frequencies and Inductance increases impedance at high frequencies, you can’t use an LCR meter to measure component values in-situ where there would be mixed capacitances and Inductances, you need to take each component out of the circuit and measure it isolated.

On a personal note, this is the second or third time you’ve tagged me at “Saturn9”

So I ordered the one Saturn9 showed.

I don’t know if it’s auto correct, but I wanted to highlight it because others have done it too. I didn’t make the handle because I’m the ninth Saturn. It’s a reference to having a saturnine temperament, out of respect for the element Lead ♄, and an appreciation for alchemy and proto-chemistry. If anyone hasn’t heard of Philippus Aureolus Theophrastus Bombastus von Hohenheim (Paracelsus) then I recommend they check him out. He’s one of my heroes, up there with Tesla and Faraday

I’ve said it before and I’l say it again. The notation system for units is crazy. I’ve been trying to calculate a coil and keep getting crazy results.

Just to Clarify.
I’m looking for 38mH, which is 38 Millihenries.
The calculator outputs in Microhenries.
Therefore a correct calculation would yield a result of 3800 uH (microhenries = uH).

I’m in SW Arkansas, the land of Chickens, Trees, and Tourists.
The last one is missing lately, though.

On a personal note, this is the second or third time you’ve tagged me at “Saturn9”

I think it might be 10th or 12th, and I’m very sorry. Funny how I never noticed that.

Still, please accept my apologies and I’ll get it right from now on.

Just to Clarify.
I’m looking for 38mH, which is 38 Millihenries.
The calculator outputs in Microhenries.
Therefore a correct calculation would yield a result of 3800 uH (microhenries = uH).

The whole units scaling by a factor of 3 thing is called “Engineering Notation” and it’s actually really great once you get used to it. Plus, it’s usually used for SI base units, which everyone uses so there’s rarely conversation factors.

It’s more the notation. I see uH and think ultra Henries. Surely they could’ve done something better than having a mH and MH in the same naming convention.

If I worked with it consistently, I’d get it by rote memorization. But from this perspective, arbitrary and capricious.

I have also had luck with Digi key. Amazon also may deliver things sooner than they say. I had like 10 things estimate 3 weeks. 8 of them arrived in less than a week.

It’s a reference to having a saturnine temperament, out of respect for the element Lead ♄,

Ahhhh, that makes more sense to me now, to me the word saturnine means Melancholy, I thought that was an unusual handle to go by. I feel much better now ( I felt sorry for you )

For what is is worth, I had heard of Paracelsus before but clearly not enough to associate him with Saturnine.

I just started guess and adjusting untill I could fine it in on the calculator. In order to keep it easy, I just went for a single layer of turns.

That seems like frickin HUGE numbers to me. Which leads me to suspect I’m doing something wrong.

Ahhhh, that makes more sense to me now, to me the word saturnine means Melancholy, I thought that was an unusual handle to go by.

Honestly I thought it was a sci-fi reference. Like Deep Space 9, or Babylon 5.
Then again, that works better when you misspell it the way I was, like a total dork.

Amazon also may deliver things sooner than they say.

Jeez, It’s almost like you work for them.
Shameless Amazon Plug