So I have this idea for a weird implantable led matrix that wouldn’t require a giant grid of long incisions for wires to install.

So 1st step: make a small incision, insert a small curved tube (barely bigger than a normal vaccine needle) (or just make this a needle and forego the incision), and use it to insert 2 small biocompatibie titanium wires with a thin layer of biogoop insulation, similar to enamel coated coil wire per incision, say starting from the bottoms right, one left and one up. After you implant the 2 wires to continue the grid, use some small tweezers or something through the incision to pull up the ends of the wires so you end up with a grid of wires with a bunch of small incisions in a grid with 4 wire ends sticking out of each.

After the wire grid installation, run the final wires from each row and column, with let’s say all rows being negative and columns being the positive channels, to a spot where a microcontroller would either transdermally connect or subdermally sit with a spot for a wireless power antenna running to an external battery. Each row and column would connect to a pin on the microcontroller, like a mechanical keyboard.

The 3rd step of installation would be to attach each wire to an led at each incision, with the led and the 2 corresponding column or row wires attached to each terminal of the led. In this way, say you wanted to light up led d4, you would connect row d to ground and supply 3v to column 4. This would allow you to addressably control each led in the matrix. Also I don’t know how to fuse the wires when you are about to implant something, this is just a general idea. Slip each led through each incision and close each one with a bandage or butterfly or something.

Final step would be to attach all of the wires to the microcontroller through either a transdermal port or just attach directly, connect a qi board and coil, then close it all up.

This would be a really involved install, but could lead to some super cool results if someone pulled it off. If you’re confused, I will add a drawing tomorrow when I’m not up when I should be asleep.

*when transdermal tech evolves into not just infection

Yeah, the problem is, that’s a pretty big when

Transdermal interfaces that don’t let bugs in are the holy grail of implants. They do exist and they are used, like here for amputees: 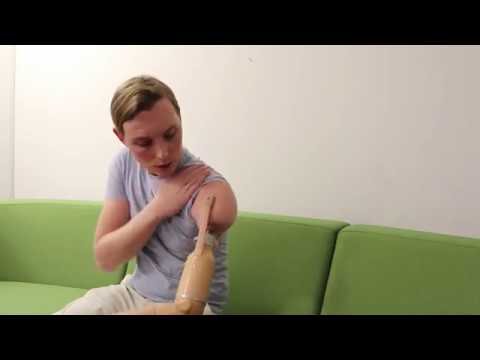 But they require the wearer to follow a strict hygiene and do some pretty thorough cleaning up regularly. And even that isn’t enough: the guy in the video had a bone infection for months for example, and the docs barely managed to kill off the bug eventually.

The only type of transdermal that works without any side effect or hygiene restrictions is dental implants (another form of osseointegration) because the tissues in the mouth are kind of special, in that they regenerate incredibly quickly and are able to fend off bacteria and other harmful bugs naturally.

IIRC, the guy in the video mentioned at some point that he had to wear gauze on the one in his leg because it leaked bodily fluids…

I have to check if it was in that video or in another one as I haven’t watched that channel for a while.

Yeah you can see it in that video. He has a piece of tissue wrapped around his leg abutment to catch oozing when he walks. Pretty crazy that he doesn’t get more infection problems when you think about it.

You might want to have a look at this post… My DIY LED tag....well the electronics anyway

Yeah I’ve seen that one

because the tissues in the mouth are kind of special