Anybody has details on the Impli Caspian?

The webpage and the video are very light on details, but this looks furiously like nothing more than a run-of-the-mill NFC chip with an NDEF record and a custom app. But maybe someone knows more: if this chip has something special, it may be interesting.

I think it is an SIID… It has the same 4 color options and they are a partner of DSruptive.

Impli has created different partnerships with a different industry expert in order to follow it aims to create the best implantable device possible.

I thought there was a thread that mentioned it a while ago, but couldn’t find it.
However
@KaiCastledine will probably be the best to answer that for you.

The webpage and the video are very light on details

Did you just goto KSEC page or the Impli one also?

Impli offers implantable devices that allow its users to keep their medical information safe and secure with them at all time.

They have social media also, you might find some more info 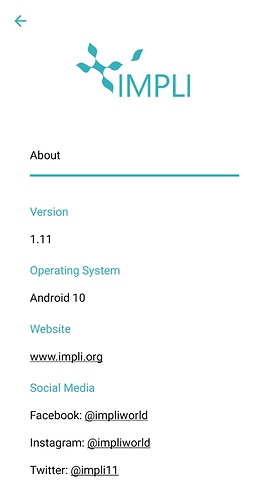 Well I now have a impli caspian

Just grabbed a ntag216 and wrote a custom resource to it

Let me register an account but yet to get confirmation email. loads medical info but is blank atm obvs.

It seems to not have it’s own nfc reading capabilities. It is just set up as the default handler for that NTAG type… it’s a Xamarin app though so might have something buried in there, not to familiar with Xamarin.

Also not that the data is not stored on the implant so you need a NFC capable phone, the knowledge to scan it correctly with your phones coil, the app and a internet connection… in a medical emergency while you are obviously unconscious unexpectedly… the paramedic is going to take there time to try scan your hands on the off chance you have one?

I do not know if I am missing something but this product seems like a joke. If it is a SIID and the ndef record is not locked seem’s like a great way to get an SIID and install for cheap.

Well I now have a impli caspian

Just grabbed a ntag216 and wrote a custom resource to it

Does this mean that you just grabbed a random ntag216 and had it do the same function as this caspian chip? Doesn’t seem like a great product then, lol

Why wouldn’t it be a great product? Not saying that this one is (I’m not quite sure what it does) but many great products reuse COTS parts. It all depends on the application. As for the price, it’s quite comparable to the naked xSIID chip from DT - if indeed that’s what it the Impli Caspian is.

Doesn’t sound like a bad deal to me - IF the chip isn’t locked.

Yep I was interested when I first saw it, it is 100% a air quotes standard implant with custom app but the other thing they offer is supposed implatiation (they do not ship the implant) you have to attend one of their implant sessions.

I think what there trying to go for is the normalise the implant and make it applicable to general public as a “safety / medical device” obviously without calling it a medical device.

Ah, the classic “make this technology accessible to the public but not TOO accessible” business model, lol. As much as I would love to visit London it would have to be for a reason other than getting this chip.

I mean don’t get me wrong i love the idea of more people getting implants and normalising the whole stigma that some people have.

So they took some hardware someone else pioneered and dumbed it down with a slick interface for the masses. Who do they think they are, Apple?

I say this as someone typing on an iOS device right now.

I was more talking about the whole concept regarding that it’s designed to list your medical data when you can’t so the entire concept relies on a paramedic trying to scan both your hands on off chance you have it when you are presumably in a bad way?

So they took some hardware someone else pioneered and dumbed it down with a slick interface for the masses.

I think this misses the point of what they are trying to do. It’s not about dumbing down implants, its about standardising their use (in this case, a common app and implant location for medical data) to help drive adoption and real-world use.

I can totally write a custom URL with medical info onto a xNT that I install in my upper arm - a first responder won’t find it. I could use an LF tag with a custom app (pet microchip style) to store medical data - they likely wouldn’t have a reader for it and know where to look.

Yes, its simplifying what you can do with the technology, but for a justifiable cause - I still don’t think it’ll work, I don’t think many places are going to try and scan everyone’s hand if they are hurt to try and see if they have data, but its not a bad thing they are dumbing it down.

And I’ll add to this, if a first responder or medical professional scans my hand, they are getting memes straight in their YouTube app. I don’t know if it’s relevant to this discussion, but it amuses me.

That’s if they can scan it… I have had mine a few days an I sometimes miss the correct location for my implant. I think you’d probably have better luck making a device with a prox LF type coil and giving it to paramedics than trying to get them all to know where the coil in there phone is. Or the app could at least have instructions. Currently you open the app and click SOS and it tells you to “Scan the implant” with a pretty loading animation of there logo… Why not some guidance or something?

I was more talking about the whole concept regarding that it’s designed to list your medical data when you can’t so the entire concept relies on a paramedic trying to scan both your hands on off chance you have it when you are presumably in a bad way?

I think this is more likely to be useful in a somewhat civilized/standardized medical system like the NHS. You’re right, this would never work in the hodgepodge trainwreck we use in the US

the entire concept relies on a paramedic trying to scan both your hands on off chance you have it when you are presumably in a bad way?

Agreed, a paramedic is going to stabilise you as best you can and get you to a hospital, they don’t have time to play with this. Maybe it would be useful if you get to the hospital unconscious but otherwise relatively stable? And even then, only if they can’t otherwise identify you and access your records through traditional means.

Agreed, a paramedic is going to stabilise you as best you can and get you to a hospital, they don’t have time to play with this.

The paramedic would if the app was somehow vetted and mandated by the NHS, AND medical professionals were trained to look for a chip as part of their first aid approach routine, AND a sizeable portion of the population had implanted itself.

The rub is, none of those things have happened. My understanding is that the company would like to get to that point, but right now they only have a handful of implantee and operate more or less completely under the radar in London-only.

There’s also the fact that this company wants your medical history with very little information on how it’s secured etc.

No different from the NHS then

I would hope the NHS doesn’t have an web accessible database where all your details are “secured” by a 7 byte identifier semi permanently tied to you.

Then again I wouldn’t put money on that