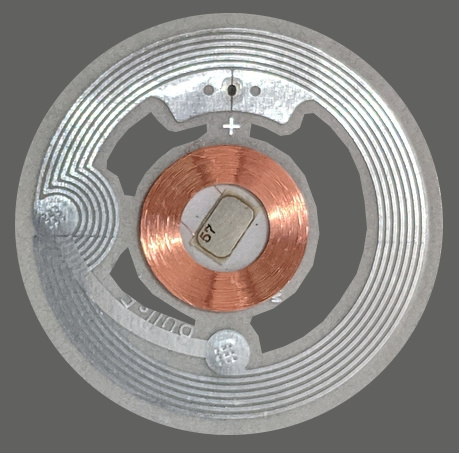 The more I look at this, the less I think this is a good idea… the polymer will have weak points around the center disc… I think maybe at best one might achieve an off-center approach… something like this… 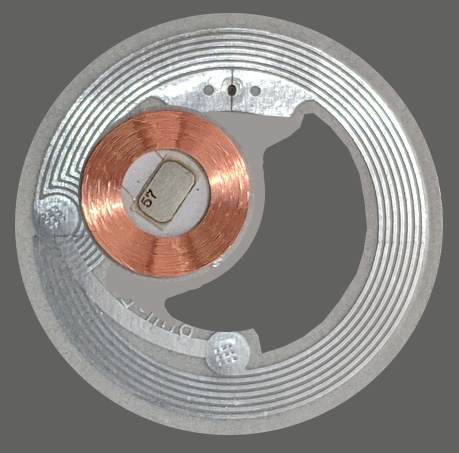 Umm, what the? how the?
That is fucken amazing…

And right you are.
THIS was my results 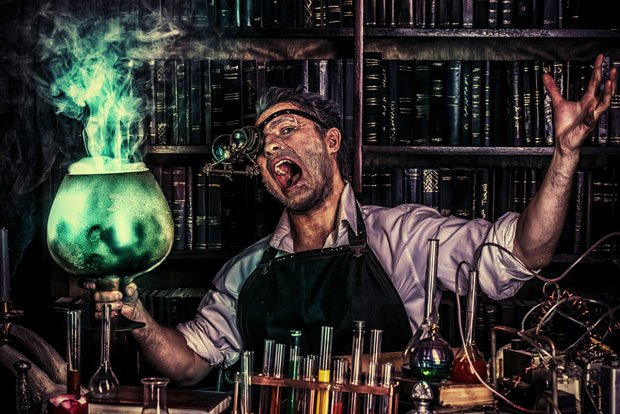 some people say i look like a fat chris pratt… fat pratt.

playing around with some ideas…

man I wish we could see magnetic fields…

I was wondering if you could likely overlap/tile a bunch of NFC fingernails. Make a light up bar… Original plan was to have a few fingernails next to each other once you release them but a solid bar would be preferable.

Make a light up bar 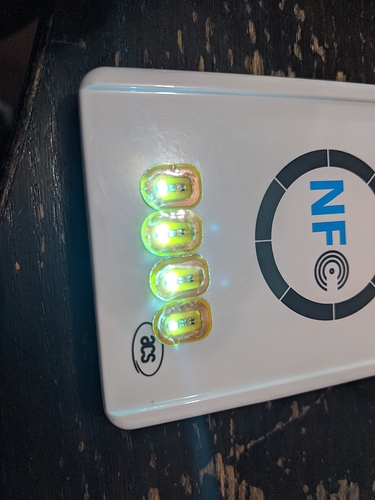 now switch it for a secure tag something like the DF! i really want one now lol but thats alot of real estate on my hand

I was going to overlap them so it was super dense. 2 rows of LEDs with the glow resin to diffuse. Implant it across the back of my wrist…

Is the sticker basically boosting the field for the led? Mine won’t light through my hand…

Make a light up bar

I can also overlap them a bit, but yes overall performance is about half of that with the NFC tag surrounding it… I’ll explain why in a minute… 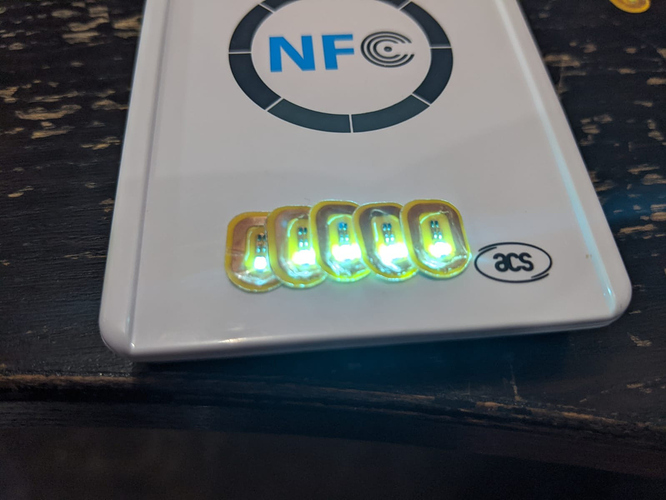 Is the sticker basically boosting the field for the led?

Well, sorta… basically it’s reshaping the magnetic field a bit and making it go where we want it. The larger size of the NTAG216 antenna is causing the field to reshape around it, forcing flux lines through the center at a much greater density (if you can think of it that way) than without the larger antenna being there.

Mine won’t light through my hand…

If you had an NFC nail (flat plane spiral antenna) inside your hand, and you placed a larger antenna around it from an Bullseye tag (cut out the metal foil NFC logo from the center first), then you would see the same effect.

yes i have a bioresin… but what i’m finding is that the real effective range the light can penetrate into the binder with glow powder is only a couple mm at best, so basically putting anything more than a drop of resin with glow powder overtop the LED is a waste… unless you wanted to try charging it in the sun or with a very bright light through the skin for a few minutes… see what that does… maybe then you’d get 30 seconds of decent light out of it… dunno.

basically it’s reshaping the magnetic field a bit and making it go where we want it.

Much better explained but exactly what I was picturing in my head.

That’s a shame. Maybe not blocking the led would work. Like coat the outside but don’t block the led. I assume there’s enough diffusion in the flesh that the light would charge it and be visible?

Either way, I want that bar of LEDs

I love the BLINKY

how many segments do you want? i assume glow resin as well… I have 10 of these light blue LEDs… I can quote you out a custom job… but I’ve run out of time for playing around today.

The total width would be 14mm and length would depend on the segment count… each are 9mm… but overlapped they are 15mm for 2 segments… but with double overlapping I can get 3 into 18mm… 4 into 25mm… plus add 2mm for safety margin… just to give you an idea of the possible size we’re talking about. 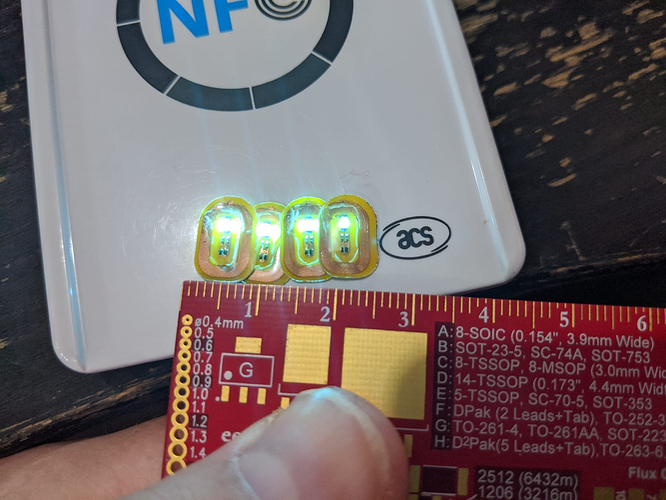 How wide do you think would be safe across the width of the wrist?
I reckon 5 would fit (32mm + margin) and be great. Do you think adding a normal flexNT to it would cause issues? Seems like the right size and would make the implant at least a tiny bit practical. 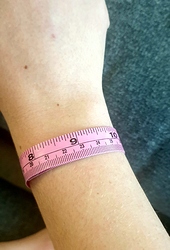 Resin would be great if it’s not going to make the whole thing super dim. I’d rather spectacular effects when lit up than mediocre all around. So yeah maybe “a drop of resin”

Either way, I’m very interested, I’ll DM you tonight and you can get to it when you have time (not exactly in a rush ATM with the lack of access to piercers)

make the implant at least a tiny bit practical.

That ended up a lot stiffer than I expected. You were right, no backing needed.

Yep, that’s a much better idea. Maybe have the FlexEM overlap a “dead” part of the antenna, or the HF tag’s chip itself (which I assume is the large area above the “+”) so that it’s stiffer and less prone to failing if the HF tag flexes under the skin?

I definitely would implant something that lets the skin reattach in the middle.

Damn. My clever attempt at fooling people is foiled