The one I have yet to do in L0 is the xLED. That needle looks like a beast. So I did 2 of 3 yesterday after I got them. No pain today, just a bit of swelling over the spark.

yeeeeeeah I’m not SUPER looking forward to that xLED, especially since I think I’ll likely get that done at the same time as the NExT (side by side ish). Better to have someone else just cram them both in nice and quick then me fiddling with clips and everything I think. As annoying as waiting is…

I decided against an xLED as I might not want to make it obvious I am unlocking the door with an embedded chip. Deviant had a fun story about pretending to scan a guest badge while using his implant with swiped creds from a employee to access a server room.

Yes that was a good war story of Devs…

I decided against an xLED

I am also not into the Blinky (

Hey good point. I think you just made me realize may put mine in my arm instead.

And do you mean it lights up at both LF and HF? @amal that sounds surprisingly possible, pretty sure you should make it happen, because blinky…

I am also not into the Blinky (

Ya it’s kinda like a tatoo and I’m not to sure I’d like the same color as time goes on. I’ve been thinking about it as a cool effect for my magic trick idea, but still it just seems like a huge commitment to a color. Idk maybe I’m weird.

do you mean it lights up at both LF and HF?

ou should make it happen, because blinky…

I’d guess it would have some hidden complexity. Specifically with dual frequency readers, you might have to worry about over powering the LED. Might not be an issue with the voltage an current we get from a reader but it would be a consideration.

In my mind, and very simplistically broken down;
It would just be a NExT with LEDs in place of the NTAG and ATA chips

@amal would have the answers as to its actual complexity

Ohh so 2 led’s, that makes sense. I was picturing 2 coils, 1 led, meaning if both got power it might cause issues. 2 led’s would also let you have a HF and LF color.

Just put it in my arm. What a feeling. 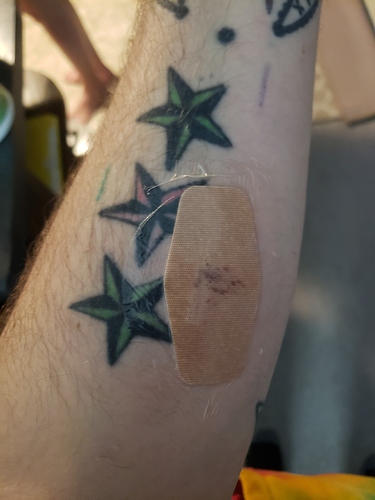 My goodness mate, you really don’t fuck around lol.

My goodness mate, you really don’t fuck around lol.

I got to thinking about it, and the more I thought of that needle, the more I realized I was likely to push it off. Also, you needed another place for your wiki.

Don’t start with the xLed

Also, you needed another place for your wiki.

I have a forearm section