That transistor can handle 40V

Really, I miss configured my variable power supply and over volted them a bit and let out the magic smoke. Although maybe that was overloading the gate.

My new variable power supply is weird it (at least on this circuit) always shows 0.0 A draw which seems wrong. Was going to test something else just to see if it’s like not broken and is just drawing under 0.1 A.

I also grabbed some stuff to try make a 125MHz coil just to see if I have any luck with that.

I miss configured my variable power supply and over volted them a bit and let out the magic smoke. Although maybe that was overloading the gate.

Yeah, that was just the base. The Vce can be 40V but the Vbe can only be 6V

Mainly because it was easy I hooked a a signal generator (my multimeter has one) up to the big air coil I made. 125KHz square wave at 2.5v… powers the LF xLED in a multitude of positions.

I still want to get the HF one working but I also definitely think I’ll try make a 125KHz one, see what range I can get. 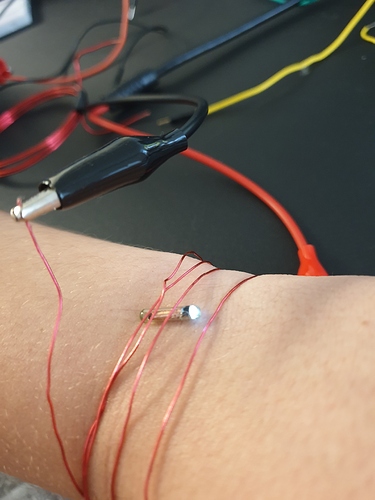 I feel like I should know this or at least have an idea but. How would I go about uping the voltage to the coil without overloading the Vbe?

I can post this in a new thread as to not derail this one if needed.

I know a lot of you have been trying to find a way to make a bracelet that will make the blinkys blink. I have been thinking of alternative ways to light up my arm. These are my ideas so far.

If any are blatantly wrong, let me know. (Still Learning, just making a shopping list for payday) I am just trying to come up with a good first project for me. (To go along with my KBR build)

Would it be possible to hook this to an external power supply? Not specifically this one,

At about the size of a matchbook, the ThingMagic Gemini HF/NFC Reader Module can fit into almost any new or existing OEM design. Supported security features, like mutually authenticated triple DES encryption, offer a low-cost and robust method of...

But maybe this one also,

I may not be computer savvy, but I am art savvy (to a point) and I feel I could make it look alright for me to wear with some changes, like casting it in resin with maybe a few more led’s to light up, or just cast in resin with a basic design as to not detract from the xLED. Could also maybe use it to program a light show? Maybe even hook it to a mic for music induced light shows.

I wasn’t sure if I could hide it in something like this, but I would sew my own with raw denim likely. 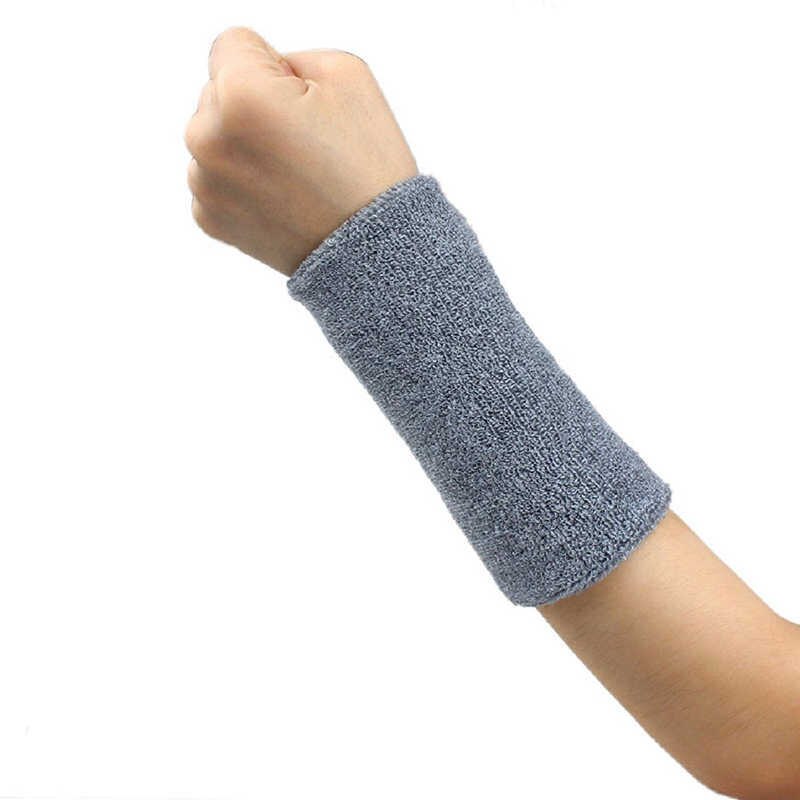 Also, unless I am misunderstanding it, could I not just cut the middle out of this one, and put it around the implant with it inside (like a picture frame)? 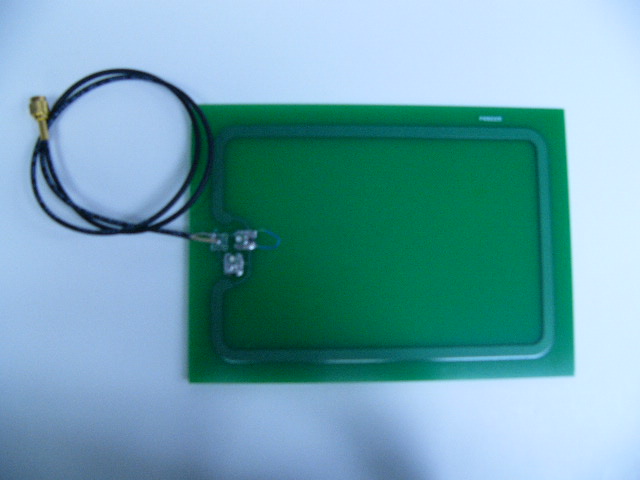 I know I could cast that to look nice in resin.

If this is too off subject, let me know and I will relocate it.

unless I am misunderstanding it, could I not just cut the middle out of this one, and put it around the implant with it inside (like a picture frame)?

EDIT:
My dislexia kicked in, I read it as

bracelet that will make the blinkys blink

Well actually it would not blink with the current design. It would just stay lit.

Hooking up power to a standard reader likely won’t work because it would not be trying to read, you would need a microcontroller like the Leonardo you linked, although there are plenty of smaller form factors. This would make the led blink whenever it tried to read it. But the main issue you would have is finding a module that can power the led without blocking it. Which is what we are trying to solve essentially

I think this is where I had the idea from,

Just playing with the field detector. Wondering if there is a reason or possiblity for future xLEDs go be oriented facing outward inside the tube? [IMG_20191119_180931]

Also, Thanks for the honesty.

I think this is where I had the idea from,

The only difference between that antenna and the one you posted is they pre cut the middle out.

Admittedly the field might be effected by the silicon but shouldn’t be noticeable.

How would I go about uping the voltage to the coil without overloading the Vbe?

Hmm. I don’t remember much about this circuit, but you would either need to change some resistor values to bias the transistor differently, or you would change the properties of the load (coil) so that it will allow more current to flow. I think the coil has negligible resistance, though, so it’s probably just the biasing of the transistor that affects the maximum current. More saturation!

Also, unless I am misunderstanding it, could I not just cut the middle out of this one, and put it around the implant with it inside (like a picture frame)?

We went over this one in leeborg’s thread (no worries, there’s alot of information here). You wouldn’t be able to frame the xLED in the middle of that coil with the middle cut out because the xLED would need to be poking straight up out of your body. If you wanted to use that coil you would need to lay it directly over top of the xLED, which blocks it. That’s why we’re planning a bracelet coil, because the field lines are running parallel with your arm, just like the xLED would be under your skin.

Just to clarify, the PCBs are made of fiberglass, not silicon, and it has little to no affect on magnetic fields.

Just to clarify, the PCBs are made of fiberglass, not silicon

So the resistors in that circuit already drop the voltage enough. I must have had it miswired when I burnt out the transistor before.

Jacked the voltage up and tada! 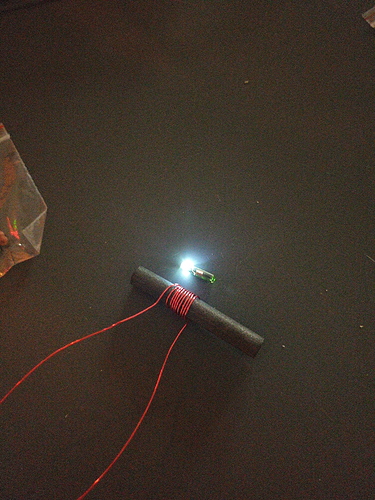 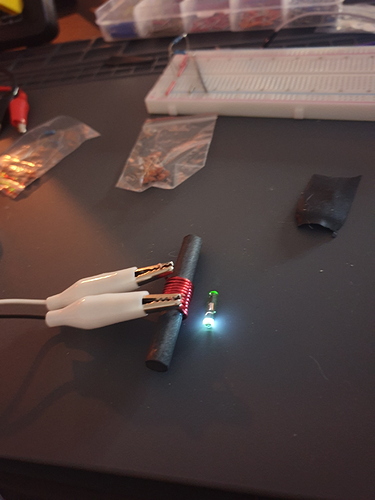 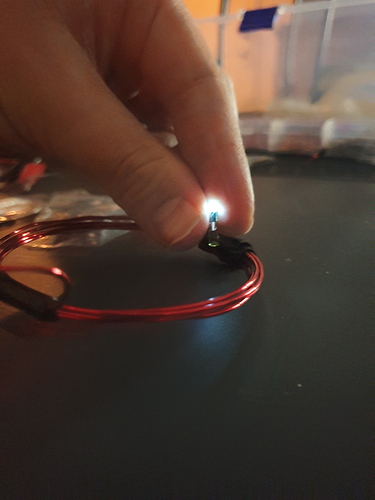 When are you taking orders?

Hanky as fuck but it’s kinda a bracelet… 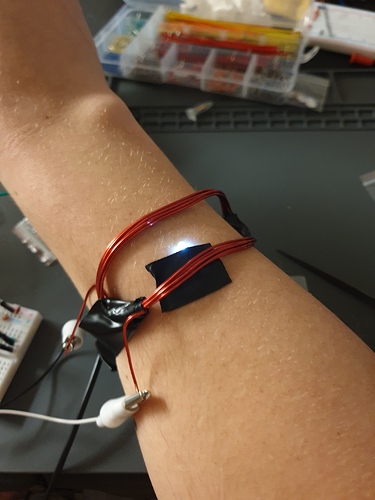 I can move the xLED about 1/4 of an inch away/deeper (so same location as in picture but inside my arm) and still get a fairly bright light.

Now if only there where implantable NFC fingernails…

Because this is awesome: 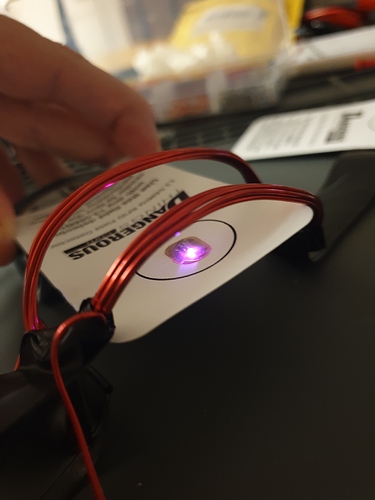 Throw some glow resin around it first…

Now if only there where implantable NFC fingernails…

Because this is awesome:

I’m really curious to see where this thread goes, I’d love to get an xLED but the only thing holding me back is nothing to keep it on twenty-four-seven. But it seems like you guys are solving that!

At this point we have a working POC. Obviously it still needs lots of work but I feel like we need to work out some constraints so we can start looking into how to optimise the solution for those constraints.

What is the minimum useful range?
Is it okay for the coil to “frame” the implant?

Do we need to mount everything to the bracelet or will we have to externalise some things? For instance a battery in a pocket with a wire running up the arm?

For my case, I think I would put the battery packs into one of those arm sweatbands, so I could wear it as close to my shoulder as possible, with the wire coming down the inside of my arm. I don’t plan on wearing it daily, so I can tack down the wire with a bit of tegaderm along my arm.