Community Project: HF LED Power Accessories
Anyone who would like to contribute feel free to add your thoughts here. If you need to make purchases to support your contribution to the project, see this thread, and direct message @amal or @Satur9 with details. Project threads can get a little out of hand with tons of people brainstorming. I ask that you limit your messages to the topic at hand. Try to condense multiple messages into one post
— — — — — — —

A team of forum members and I have been attempting to design a wearable device that outputs a HF signal to power LED implants. It is purely for aesthetic purposes. The first build will be a bracelet, but it could be adapted to other form factors after some testing.

The project has died down over the winter months, but I invoke the power of resurrection now and summon the team members!
@Vicarious! - @Leeborg! - @Naus3a!

Unfortunately I can’t find @Haruspex on here, but I suspect my Shout will echo to the halls of Discord.

The new member @leumas95 has summoned us to action. If we loop in everyone else on the forum, we may actually get a working prototype out of this and we can format it as an instructable or something.

There’s a bunch of legacy info we can loop in if need by, but here’s an update on where we were at last check. I figured out how to make a Pierce Oscillator 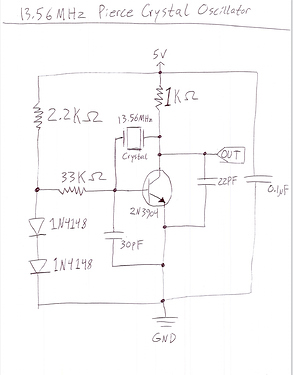 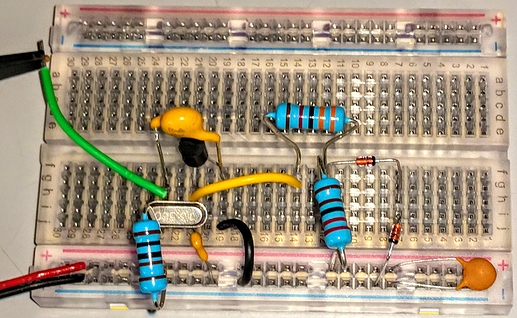 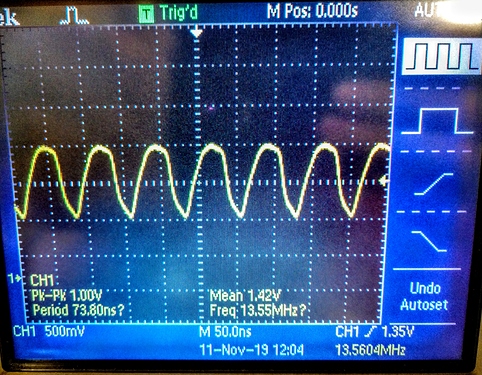 Hypothetically an appropriate inductor could be placed in series with the 1kΩ resistor at the beginning. I tried a couple through-hole discrete inductors I had lying around, but I wasn’t able to light the HF xFD. There’s also the possibility of connecting the gate of a high switching speed mosfet to the wire labeled “OUT” in the diagram, and using that to control current flow to the coil.

There are also other types of oscillators I haven’t gotten an opportunity to fully test out yet because they rely on inductor and capacitor tuning, not a tight tolerance crystal oscillator.

There is a ton more that can be done in this area I just don’t have the bandwidth to address it at the moment with other priority VivoKey development and my full time job. Feel free to contribute in any way you can.

Stretch Goal:
Resonant circuits that light LEDs from up to a meter!

22 Likes
LED implant under a tattoo. Migration prevention, powering options and implant selection
XLED field detector- Is there a way to power it, just to look cool?
What are some implants/modifications you all would like to see in the future?
So I bought an RFID door lock and it doesn't seem to be working
Prodigy smartlock
Proxmark3 Easy with Iceman/RRG Firmware!
The flexNExT is now in limited release!
Looking for a consultant maybe?
Laces out and bevels down
Connect Android to Proxmark Easy?
Coil Inductance Calculator
Show off your blink! xSIID NFC + LED Gallery (+Glow)
Power source for LED implants
New color for led implant
Mikroe NFC USB Dongle help
LED excitation circuit
A couple of newbie questions
Show off your blink! xSIID NFC + LED Gallery (+Glow)
adiev March 18, 2020, 8:49pm #2

this is really cool!! if it enters into any sort of mass-ish production, i’d definitely be interested in buying one.

unfortunately i can’t provide any technical help, but will be cheering you on from the sidelines!

just out of curiosity-- would this be designed to ONLY work with HF xLEDs, or would it also work with xSIIDs? i assume it would, but would it react differently because of the data transfer capabilities of the chip?

It would just be a passive power source, so it would work with the xLEDs, xSIID, xFD, and diagnostic card. No communication, just a 13.56MHz magnetic field blasting out.

Cool, loop me in hahaha

I mean the circuit should be fine what’s the issue or problem? Is it coil design or something else?

The shout has indeed echoed to the halls of discord. I am very ready to revive the efforts especially now that many of us are slowly going insane out of boredom from home quarantine!

If you want an easy coil to play with, that’s well designed, why not modify an RFID diagnostic card?

It has both HF and LF coils. You’d just have to remove the LED and a couple surface mounted capacitors. Both would come right off with minimal love from a soldering iron.

That’s so cool!!! I definitely going to do one of these as soon as my implants arrive at home.

I mean the circuit should be fine what’s the issue or problem? Is it coil design or something else?

The problem is kind of nebulous at the moment because we’re coming back to this months later. IIRC the problems were:

This is awesome, I’m glad there is interest. This looks like it could be great fun.

I had not given it too much thought yet, I did see this thread and was looking for this kind of thing:

There’s a bunch of legacy info we can loop in

If you have any recommended reading for me it would be helpful, but your posts in this thread already gives me some pretty good jumping off points.

There is a ton more that can be done in this area I just don’t have the bandwidth to address it at the moment with other priority VivoKey development and my full time job. Feel free to contribute in any way you can.

Totally understand (can’t wait for the new VivoKey stuff)
It will probably a bit of a slow ramp up for me anyway, I moved to the USA semi recently and I need to reacquire most of my electronics stuff before I can start tinkering, so I am mainly reading up on stuff atm.

Stretch Goal:
Resonant circuits that light LEDs from up to a meter!

That would be fucking epic! Would we need to tweak the implants themselves to get range like that? It looks like it might from skimming that page (I am meant to be working so I am resisting getting sucked down a researching rabbit hole) 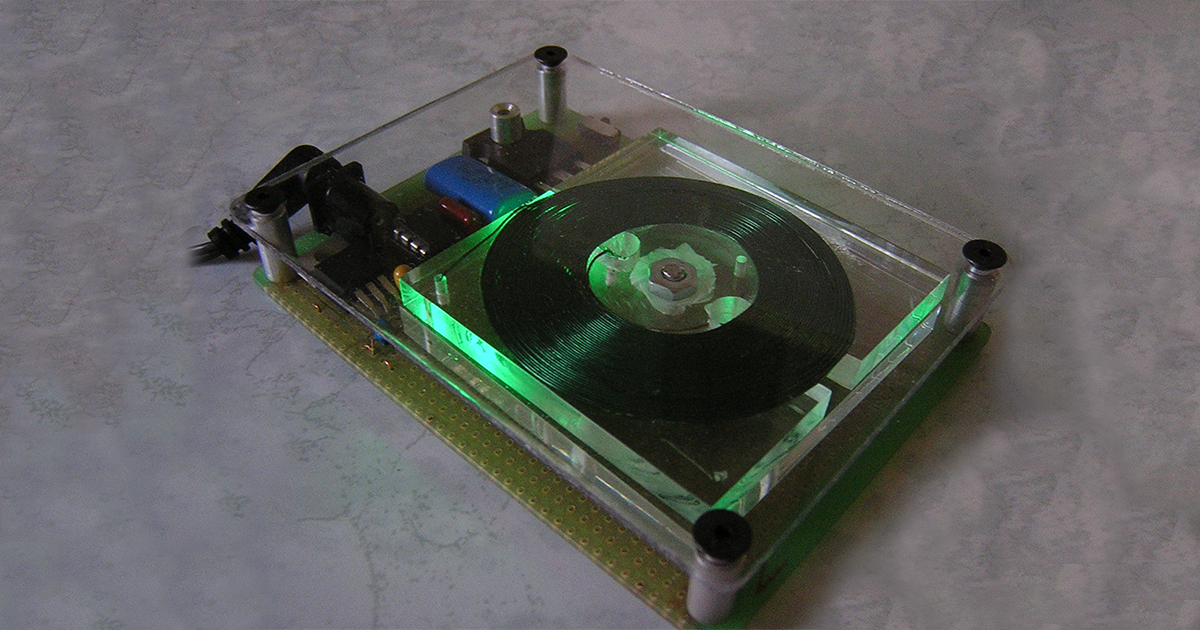 Build Your Own Induction Charger

Borrowing from the concept of wireless chargers now on the market, you can build your own DIY version to power your projects and learn about inductive charging in the process!

Check out the spread (unfolds centerfold)

thanks for reviving this

In these pandemic times I’m locked away from my hardware toys, but I’m really happy to see renewed interest in this!

Would we need to tweak the implants themselves to get range like that?

Possibly. What we need now is for someone to dive into researching that. It’s easy enough to test it out, and if we can prove it and people are interested we can look into making special resonant xLEDs.

Also found the answer to questions 1 & 2 from above:

From that “Build Your Own Inductive Charger” schematic above, I see that you can in fact hook a mosfet up to the output of the oscillator. Then you need an appropriately sized inductor and capacitor to create resonance.

Tasks people can jump on:

This was a good resource I found

That looks great, just the sort of primer I am after, thanks!

Can someone figure out an appropriate size that could fit most people?

That it is a very good point, making a single bracelet size that would fit multiple users will be a challenge given we need unbroken loops of wire. It is also going to depend on where we want the bracelet. The wrist would be typical but hiding it higher under a sleeve also appealed to me, having it up around the upper arm may also solve getting it over the hand as the diameter of your hand is much closer to that of your upper arm (It would also make having an external battery in something like your pocket easier).

For resize ability It might be easier to look into options that allow for a break in the band. Ideas that come to mind would be using a flat PCB trace style antenna on a flexible materiel like this: 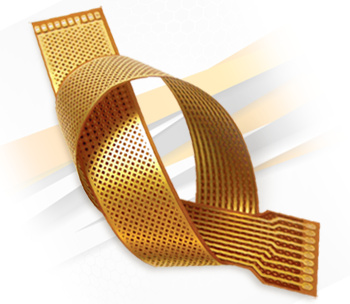 or a wire coil in a horseshoe kind of shape, but I am unsure how that would effect the field (I might try an get hold of FEKO or some other EM simulation software)

Tasks people can jump on:

I will probably start by looking into a MOSFET just so I can try build a POC. On that note the xFDs are identical to the xLEDs other than the glass right? Would rather order them for testing than waste a xLED. I feel that having an xLED (or something analogous with it) lighting up would be a great first step and would probably help us with the sizing/form factor research.

Before I forget, we probably also need to look into if the implants would heat up with long term use. This may have been tested already.

Trying to wrap my head around this with my limited knowledge base, please forgive if this is off, or obvious.

Years ago…
I had a coworker who, through politics, ended up in control of our work radio. After 6 months of the worst programming, I kinda snapped.

This device is a battery pack, a crystal oscillator, and a short piece of wire used for an antenna. The actual oscillator chip is under the cover in the top corner. I wish I could show it, but it’s glued in place. That said, it’s about the size of your pinky nail, and has 4 solder points. 1 pos, 2 neg, 3 output signal, 4 not used. 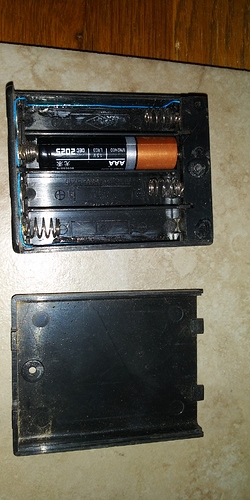 It worked wonders forcing a truce on the radio.

While I realize, I was just pushing signal, and we need power, couldn’t it be nearly that simple? Use a fast Mosfet, and you could jump the power up. A battery, two tiny components, and an antenner wire. (suitably sized).

Something similar from Mouser

couldn’t it be nearly that simple? Use a fast Mosfet, and you could jump the power up. A battery, two tiny components, and an antenner wire. (suitably sized).

You’re on the right track. That’s almost exactly what I did with the Pierce oscillator. The only reason it needed more components was because I was amplifying the weak signal from the crystal.

There are two differences in your use case:

O.K.
Say I output one end to an appropriate coil. For arguments sake, I’ll say I violated an RFID Test card.
The other end of the coil would be ground.
I would probably definitely need the mosfet to “power up”

I don’t need one of these, but if I get Covidededed out of work, then I’m probably gonna end up playing with it while I wait.

In addition to the mosfet to drive the actually coil/capacitor combo, you’ll also need all the other components in that schematic I posted. The crystal is putting out a signal, but it’s microamps at best. It’s nowhere near enough to drive a mosfet directly. You need to pre-amplify the output using a smaller transistor. That transistor also needs to be able to switch above 13.56MHz (like the 2n3904).

Gonna keep throwing it at the walls of my mind till something sticks. I ordered a few components, cause frankly, I feel like playing with it. Thinking it’s gonna be fun. And I might even learn something.