How can I tell if my implant is in the right layer?

Hey everyone.
I got my implants put in 48hours ago . The one in L0 position (NExT) is in well and doesn’t hurt at all. Wound is closed up and looking nice. The one at L4-5(it was put in just above knifes edge and has now moved down to it) is an xsiid, it has stayed slightly swollen and feels like a bruise constantly being pressed . One end seems to be up higher than the other and I am worried that maybe its in the wrong layer? It all went in the same as my Next and was done by a body peircer . I have videos of install if it helps . Can read them fine even through swelling and bandaid.
Is there any way of working out if its okay and in the correct layer? Should I wait till swelling goes down before doing anything.

Another question I have is how soon can I get the area wet, as in showers and washing hands etc .

It’s probably just fine. If it reads well, it’s probably close enough to the skin, even with the swelling - ergo, it’s where it should be. Your piercer might have hit a vein or something and it’s still tender. Give it some time.

In any case, if it went nose down, your body will probably kick it back up eventually. My advice is, if it still feels odd in a week, see a doc then. But don’t sweat it.

As for washing hands, I just take the bandaid off 12 to 24 hours later myself. But that’s just me

thank you Rosco. I hope it’s all good. Im sure it will be. I can feel its still and see the light glowing through skin and swelling is going down in mornings after I wake up. Might just be because im working its swelling up during day . Also doesn’t help that I’ve bumped it a few times I guess .
Yay! Can have a shower properly, atlastt

Maybe your piercer has been a bit rough. It happens.

My first implant was done in the worst possibly way: she nicked a vein, caused massive bleeding that went half-way up my arm, and caused half of my fingers to go cold and numb every 2 hours. 4 days after, I was worried enough that I had my hand checked out at the ER - and it takes a lot to worry me. The doc said “Meh… your hand has a pulse and there’s no infection. Just go home and wait it off.”

Now the chip has moved over half an inch down the thenar muscle, went back up against the underside of the skin, and it’s been fine ever since.

So, like I said, no worries. It’ll most likely sort itself out.

Thank you! That must have been what she’s done. My pinky has been funny. Cold and tingly every now and then and it bled like crazy compared to the other one. Bled all down my hand and arm aswell

This is really nice to hear. Thanks

Keep an eye on it though. I didn’t say it was nothing - just that it probably was nothing

Can we get a picture of that part of your hand?

My pinky has been funny. Cold and tingly every now and then and it bled like crazy compared to the other one.

Yeah… heavy bruising combined with swelling can put pressure on major nerve bundles which can impact their ability to carry signal properly… so you can get periodic numbing and tingles… but as the swelling goes down and things return to normal, so should those sensations. 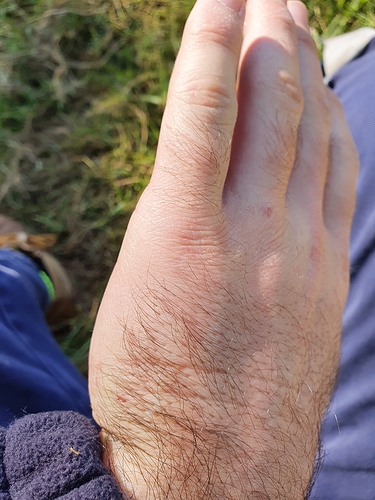 20200731_0942263024×4032 2.78 MB
Its feeling alot less bruised today and I can feel both sides of the implant . The top is definitely deeper than the lower end near entry . Its only a couple millimetres. Perhaps its under the vein?its also angled slight inward toward the top of my hand
Thanks for that info Amal

Hey Amal, bruising is still under the musscle , swelling is down. I have determined that the implant is down into the muscle, its on a steep angle down and the end closer to the insertion point is clearly visible without tensing .
Is it a good idea to try massage it back up into the right layer and force a channel?

Does it move when you flex the muscle without moving?

What do you mean?

Well, tense the muscle and keep your fingers still: if the implant is in the muscle, at least partly, you should see it get pushed out. If it’s in the fascia, it should stay still too.

all good. Do you know if its possible to push it out?

I have no idea. I’m neither a doctor nor a body artist. Anything I would advise you would probably be BS, beyond what I know to be true from my own, less out of the ordinary implantation experiences. 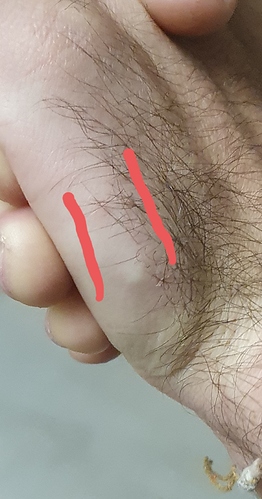 Looks fine to me. As long as there’s no pain or redness you’re probably fine.